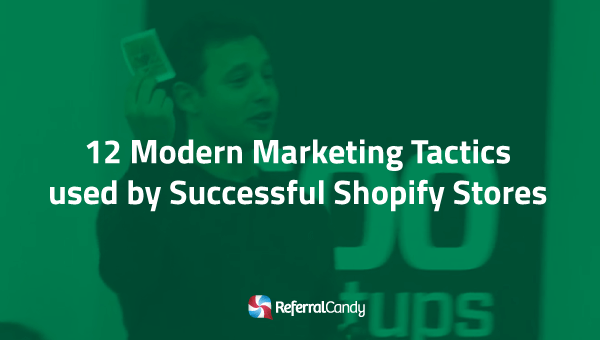 Harley Finkelstein is the COO of Shopify, and all-around cool guy. In early 2014, he gave a talk at 'Commercism', which was cited on a Hacker News' list of favorite videos relevant to entrepreneurs.

As with the Airbnb growth video, it got a criminally low number of views- so we decided to sit down, watch the video and take some notes.

(Note: This post was written in 2015, and the video still has a criminally low number of views.)

He talks about unique marketing tactics used by Shopify retailers. Some of the stores below use our referral marketing app on the Shopify app store, so it was great to see our customers get a shout out!

(Here's a quick and easy guide on how to setup ReferralCandy on your Shopify store.)

Here are our notes and transcripts:

In 1876, John Wanamaker created a store in downtown Philadelphia called Wanamaker's. It was the first time in America that a bunch of different brands and retailers were under the same roof. Also the first store to have electricity and a telephone. Since John did this, in Harley's opinion, things have been pretty boring in retail and commerce.

There was a glimpse of hope in the late 90s, and then nuclear winter. Good news: Harley believes that commerce in next 5 years will be more exciting than the last 150.

The following retailers have two things in common:

Goldieblox's Story: Debbie Sterling is an engineer at Stanford and she realises that she's one of 2 women in her classes. She wonders why this is, and realizes there are no toys in the market to get girls interested in engineering. She goes to Kickstarter and raises over $285,000.

The toy is cool, but the emotional connection that the consumer makes with the brand is even cooler. Debbie figured out a way to convey this message pre-purchase, before they even look at the product. Goldieblox starts the entire buying experience with the video of Debbie sitting on her living room floor explaining why she started the company.

So tell a story.

DODOcase uses a great tactic post-purchase. Created incredible sales loop- after you make a purchase, you're prompted with a coupon- refer your friend.

Craig Dalton, CEO of DODOcase, told Harley that customer referrals are a critical part of their business. The study came out by RJ metrics- turns out that the typical online store gets 43% of its revenue from repeat purchases.

You pay to acquire one customer, but you get a lot more. Amazing distributed sales force.

EXTRA: For a more extensive read about what DODOcase does right, read Richard Lazazzera's post on the Shopify blog: 6 Foundational Ecommerce Marketing Tactics to Stop Your Bucket from Leaking.

These guys sells a piece of apparel that's sold on literally every street of Canada. How did Canadian Icons, a store that's only 8 months old, do so well despite all the competition?

They understood who their audience was. They paid careful attention to the time and date that people were purchasing.

Turned out that people were buying on days with snowstorm.

So they built that into their model/offering- buy jacket during snowstorm, 90 mins hand-delivery to major Canadian cities- hand-delivered so you won't be cold. Geographic specific experience.

4. Budwieser Red Light – Product Based Entirely On One Experience

Canadians watch a lot of hockey together as groups. Budweiser tapped into this with their Red Light product. You put in a Wi-Fi enabled SD card and put it next to your television– any time during a hockey game, when your favorite team scores, the light goes off and you get a siren– very cool.

They built a product entirely around this one experience.

5. Herschel – Let Your Customer Show Off (in print)

Herschel needed a way to share their imagery and inspirations with public, and they wanted to do this with physical, print piece of content.

Everytime the report goes out, Herschel sees a notable increase in traffic– more people come into their physical stores AND their online stores. Like clockwork. Best part? User generated, by customers for customers. So let your customers show off in print.

Chubbies sells one product. Their manifesto states this- "We don’t do pants, cargos, capris… we do shorts and only shorts."

In a brick-and-mortar context, selling only one product would be a disaster. You have little niche companies- bathing suits- but they're few and far between. But you can do this online. Sell one thing and sell it really really well.

Johnny Cupcakes has something called Freshly Baked, which are the new releases each week. Create incredible anticipation every single week.

Their loyal customer base comes back to check out what’s new. They might not necessarily buy it, but they come back week after to week to see what's new. Scheduled anticipation.

Justin Hilz- the executive- said that this creation of excitement is one of the reasons they're so successful. It's new, fresh and novel.

They don’t sell stuff, they create experiences that make people want to buy stuff, and they go on to buy it later, online. Physical events that lead to online engagement.

Extra: Seth Godin actually wrote about Best Made Co back in 2009.

Pink+Dolphin creates a Lookbook with every new release of products. Shoes, hats, t-shirts, bags- You as a consumer can see the way all the products fit together. How does this hat look with this t-shirt, what socks go with what shoes?

This increased checkouts- customers buy 3, 4, 5 products instead of 1-2.

10. Pencil by FiftyThree – Start with WOW

FiftyThree's Pencil. What these guys do is they start with Wow. There are three things you can do with the stylus- draw, erase and blend colours. The team felt that there's no way to feature and showcase these features with photography alone.

So there's an immersive video that plays immediately. Know within 5 seconds what the product does.

Buy Me Brunch is a SF based company, edgy, comfortable t-shirts. They do customer reviews really well. Most companies do reviews the same way- they email you 7 days after you buy- "We hope you enjoy it, here's a coupon or something, please come back and leave a review."

These guys have flipped it all on its head. Take a picture of what you're wearing, hashtag it on Instagram or Twitter, and it'll automatically be uploaded right to Buy Me Brunch.

Black Milk does this really well too. Something that was never possible in the old brick-and-mortar context, before these social media technologies.

They had a bicycle challenge in January- they'd give you a shirt from Rapha, (the Patagonia of the cycling world). That one promotion led to more sales in January 2014 than all of Q4 2013. Sold more than the Christmas rush.

This was a bonus story that Harley included, because the founders of Zboard knew he was a fan and they personally surprised him with the latest model by finding out where he was and bringing it to his hotel room.

The takeaway there was that it's really powerful to delight your customers, because that makes them want to tell other people about you.

Conclusion: The next 5 years of retail are more exciting than the last 150.

Shopify has more than 500,000 stores on Shopify, and they believe that the future of retailers belongs to creators and curators, to small businesses, not big-box stores.

This is the future of retail– guys like Zboard and other stores.

Next 5 years could be the most exciting years in retail of the last 150 years. Small guys, future belongs to them. Shopify 3rd highest traffic > all except Amazon/eBay.

A: Predominantly direct, but any merchant should be thinking about other marketplaces- whether you sell on your own website, or you sell on eBay, or on Amazon marketplace You need to be everywhere.

The nice part about Shopify is it all still feeds back to Shopify, so you can run your business on Shopify. We encourage our retailers to sell on all marketplaces, we think those are great opportunities."

A: "20% of checkouts on Shopify happen on a mobile device (including tablets). It's there, they have to be ready for it. All themes responsive. But just as you have to be thinking about cross-channel, selling at Amazon marketplace.

I think the paradigm for the last 150 years is that the retailer tells us how we as consumers should make the purchase. If you want this, you wait in line overnight because the PS4 is coming out.

In the future, the consumer's going to tell retailer, "I don't want to buy like this, I want to try it out in your store, then I want to buy it online later", and so on. That's what the future's gonna be like."