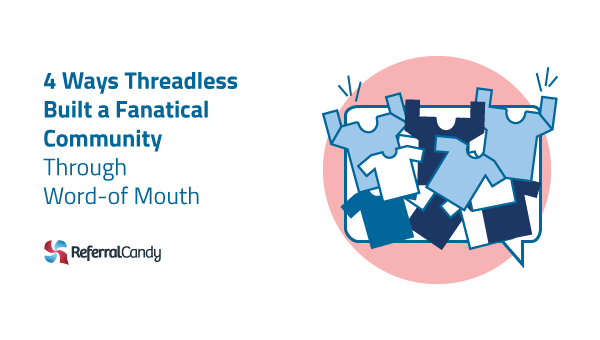 If you're a graphic designer or a fan of graphic T-shirts, chances are, you'd have heard of Threadless.

They are an online community of T-shirt designers and a platform where they congregate to submit and vote on T-shirt designs. Designs are submitted every week, and the highest-voted designs get printed onto actual T-shirts for sale. Designers are paid 20% in royalties, and either Threadless gift cards or cash.

Threadless was started by Jake Nickell and Jacob DeHart in 2000, based on the idea of a community where designers could submit designs, get paid, gain recognition, and wear the coolest T-shirts.

What a great way to secure the brand's first customers and create much-needed exposure!

Let's check out how Threadless built their insane community from the ground up:

1. Host competitions that turned T-shirt designing into an engaging sport

To spread word of Threadless, Jake spent a huge amount of time cruising the Web, posting comments on blogs, and engaging with Threadless followers, who in turn promoted the weekly contests to their family, friends, and associates.

All this was done without any help from traditional advertising:

We like the idea of it spreading via word of mouth, organically, naturally. It's not that we don't market, we just don't advertise. I'd rather somebody hears about Threadless through an article in a magazine than an advertisement in a magazine. - Jake Nickell, in an interview with Techradar

When designers submit their designs, they'd get all their friends to help vote for them. In turn, these new visitors would often go on to check out other rad designs. This helps spread the awareness of Threadless, as well as their designers.

Here are some of the themed challenges:

A. Threadcakes - Transforming Threadless designs into edible works of art

What's more awesome than having your design printed on to a T-shirt? I know, it's having them made into a three-dimensional cake.

Although Threadcakes isn't hosted on the Threadless website, it has attracted scores of skilled pastry chefs eager to show off their skills in transforming Threadless designs into actual works of art.

B. Win20k Challenge - $20,000 to whoever creates the most awesome T-shirt design

A huge competition where the only rule is to "create the single, most awesome design ever imagined by humans, animals, and extraterrestrials alike".

Designs that have the most votes and funds raised will be victorious, taking home $20,000, royalties and gift cards.

This is where I found the most hilarious design to date:

C. Minimalism Challenge - A challenge to communicate an idea with as little as possible

Since then, designers would gather round to create their best minimalistic art for a chance to win $2,000, gifts, and even a minimalism art print by Ryder himself.

D. Threadwars - A one-on-one themed design competition to see who's the best

A brutal one-on-one design showdown where designers are challenged to create designs according to a specific theme and gather as many votes as they can.

The winners of each duel would advance, where only two shall remain to face each other in the finals.

Currently in its ninth year, Threadwars offers only gifts and no cash rewards, so you know the designers are there to prove themselves and nothing else.

2. They built a fun and loyal community where designers can challenge each other to get better.

Unlike most companies, where the product creation process is separate from the consumer base, Threadless exists only because of the amazing community they have helped to shape.

This presents several interesting factors that are responsible for their success:

Platform to create, compete, and share: Having a platform where designers can have some healthy competition and getting the rest of the world to see and vote on their designs. This is something artists and designers didn’t really have before.

Healthy competition: Design competitions with prizes encourage designers to give their all, thus improving the overall quality of all designs. Threadless then becomes a place where people can go to check out the best in graphic design.

Voting rights: Users are given a voice, where they get to have their say in which designs they prefer.

Recognition: Designers get recognition for their works, gain followings, and winners get paid and their T-shirts made. Indonesian-based artist Budi Satria Kwan mentions how his designs are recognized in the US, even though he's never been there before.

Read next: 30+ examples of marketing via communities

Threadless has a section on its website called "Artist Shops'.

All designers have to do is create a shop, upload their designs, and Threadless will handle the rest. It acts as an ecommerce platform, like Shopify, but for designs and T-shirts.

But what's cooler is their "Artist Spotlight", where Threadless features artists and designers that people should know about. Some of them are popular artists, like Tim Seeley, the one responsible for the artwork of He-Man and the Masters of the Universe, while others are actually designers from the Threadless community!

Those who have a shop on Threadless have a chance to be featured on the Artist Spotlight, which is great for getting them recognized.

4. Forged partnerships with bigger brands, so designers can reach out to an even wider audience.

Over the years, Threadless has had numerous partnerships with companies like Gap, Dell, Griffin, Unicef, Thermos, Blik, etc.

This provides a bigger platform for creativity and for designers to share their work with the world, beyond just the Threadless community.

But Threadless doesn't just partner up with any big company; when some big companies like Target and Urban Outfitters approached Threadless for a partnership, they were turned down.

As Jake Nickell puts it during an interview with Chicago Magazine,

I have nothing against either company, but I really wanted a place where the individual artists would be acknowledged with their designs. Neither company could offer us that. Gap and Bed Bath & Beyond could.”

This is a huge fist-bump for designers since they know they can trust that Threadless will make decisions with their best interests in mind.

And having the opportunity to have your designs grace the stores of Gap, Dell and others motivate them to put in their best efforts when designing!

Read next: 9 examples of collaboration in marketing

Focus on building an engaging community, and grow it using word-of-mouth.

The path to Threadless' path to greatness can be broken down to the following factors:

Hey! Check out these 25 awesome marketing strategies from the fashion industry here!