How Spotify Built A $5B Business With >75M Music Lovers 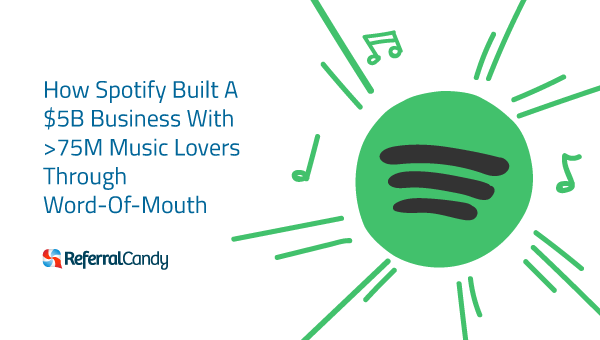 The future of media is in streaming. Such goes the bold claim that predicts the eventual demise of movies and music we buy and own. And one of the companies responsible for this paradigm shift is Spotify.

Spotify is a streaming music service originally developed in 2006 in Sweden and launching in 2008. It is not without controversy, having come under fire from musicians the likes of Taylor Swift and Thom Yorke for their business model and the difficulty of new artists to generate revenue from the streaming service.

However as of 2015, Spotify is worth $5 billion and has a user base of 75 million members, of which 20 million of them are paid customers, and the service is available in over 50 countries worldwide.

So how did Spotify rise to become the world’s largest music streaming platform?

1. Create a sense of exclusivity by making the service “invite-only”

During their initial release campaign, Spotify required new users to provide their emails to the company in order to be “invited” to enjoy the service. It created a viral element to the service, with users having only 5 invites at first to share with friends.

The very same strategy has been instrumental to the meteoric rise of other digital-based service goliaths, Facebook and Google Plus. The scarcity of the service makes it seem “cool” and makes users feel part of an exclusive club.

While the service eventually expanded to being available to anyone (as was expected from the outset), building this type of hype behind a new venture can help ensure greater media coverage and market saturation from the initiation of the business.

2. Freemium gives users the best of both worlds

Spotify operates a freemium model with the majority of its users streaming music to their mobiles or desktop via apps or web browsers. Users subscribing for free get ads between tracks, which are part of Spotify's revenue model. Users of the free service encounter audio ads every five or six songs, or approximately three minutes of advertising for every hour of listening.

While these ads might get annoying after a while, most people love free things and are likely to share news of a free service to their friends. Providing a platform for companies to advertise to millions of users also ensures that Spotify is being talked about amongst marketers hoping to promote their brands through the service.

Learn more: The Psychology Of Freemium Games – Lessons And Insights That Can Improve Your Business

3. Appeal to a shared human experience - the love of music

In 2013, Spotify launched its first ever advertising campaign, at a time when Spotify may face increased competition from big companies like Apple, Google and Amazon, all of whom are rumored to be launching music streaming services of their own.

The campaign highlights the wide-reaching, emotional power of music, and its impact on the human experience:

"Because we were all conceived to a 4x4 beat. Because music can't be stopped, can't be contained," the narrator says. "Because music is worth fighting for. Why? Because it's music."

The year after, Spotify launched its #thatsongwhen campaign. Few things are as evocative of memories as music and Spotify is using that emotional connection in a new online and social media push that invites users to share their songs and the real stories behind them.

Users are able to upload a photo along with their story and hashtag it to share on social media, further strengthening the brand’s visibility and reach.

4. Collaborate with publishers and music labels to increase reach

Spotify has used co-marketing and partnerships with publishers and music labels to increase its reach by embedding different formats of widgets on other sites.

For example, acclaimed music site Drowned In Sound has a monthly playlist which it embeds within its blog which encourages its readers to engage with Spotify. A music magazine like NME offers apps with a range of playlists which again will generate awareness and engagement.

Such collaborations provide these publishers and music labels a means to promote and stream music digitally, but at the same time also benefit Spotify by exposing Spotify to their fanbase.

5. Anticipating what users want and giving it to them via Playlist Targeting

Spotify curates playlists that cleverly caters to its users’ needs. From playlists catering to specific genres and moods to more specific scenarios like “Working Out,” “Chill Out Evenings” and “Lazy Sundays,” there is a perfect playlist for any and every time of day.

But Spotify’s crown jewel is its Discover Weekly playlist, which takes into account the music that users have been listening during the week and recommends them artists they would like. This playlist is updated every week and provides users with fresh new music that they would be telling their friends about.

Spotify also has famous people create playlists, in case anyone was curious what Barack Obama listens to. Users can now brag to their friends they have the same music taste as the US President.

Read Next: How $50B Company Uber Expanded Into 300 Cities In 6 Years Through Word-of-Mouth