How CrossFit Became A Craze Through Word-of-Mouth 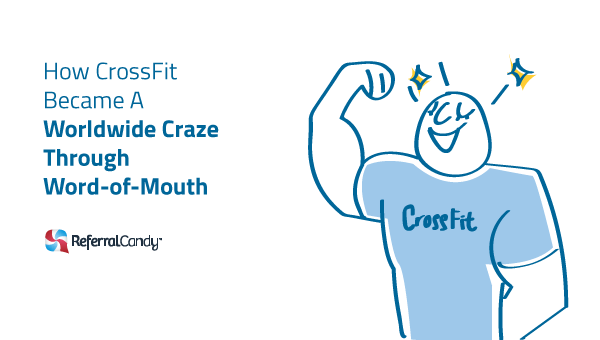 Many people who have heard about CrossFit think of it as a form of exercise or sport, but it actually started out with a company of the same name.

So how did a fitness concept that originated from a single gym in Santa Cruz, California turn into a massive cult-like phenomenon 15 years later?

1. CrossFit's Workout of the Day (WOD) concept is so effective and interesting that people constantly talk about them, and keep coming back for more.

A. Concept that is actually effective and functional:

Unlike most gym exercises that tend to isolate and focus on specific muscle groups, CrossFit exercises are sourced from gymnastics, calisthenics, compound gym exercises, and olympic weightlifting.

CrossFit’s emphasis on functional movements allows individuals to become better adapted at daily activities. As they find it easier to do things that used to be difficult, such as carrying really heavy bags of groceries, it makes them more excited to go back and keep getting better.

The functional and practical value of CrossFit is also why more and more soldiers and firefighters are using CrossFit to augment their training.

Josh Newman, the owner of CrossFit NYC, the largest CrossFit gym, explains that its effectiveness is what gets people addicted to CrossFit:

We have women coming in all the time who say they've never been able to do a pull up. Six months later, they are banging pull ups out.

In CrossFit, every workout is measurable and scalable, so people are able to measure their progress and tweak it any way they want.

Every CrossFit gym (commonly called a 'box') keeps a record of their members' performance, so they feel a desire to better themselves, and one another.

The healthy competition keeps them focused, and gives them a sense of achievement when they manage to beat their previous personal records.

"Yes! I beat my last personal record! Gotta tell my friends about it!"

A key characteristic of CrossFit WODs are their randomness - everyday's workout is different from the last.

This constantly changing workout system keeps every workout interesting, and their scalability allows individuals of every fitness level to feel the burn.

They feel excited to go back for more; to test their bodies against new challenges.

"Whew, that last workout was brutal, but I made it. Let's see what the next WOD will be like!"

Word-of-mouth pro tip: Understand what people like to share about, and find out how you can apply it to encourage people to share about your product.

Providing practical value is a good place to start.

2. The annual CrossFit Games give athletes a chance to become the “fittest person in the world", and motivates the rest of us to keep on improving.

The CrossFit Games is the Olympic games of CrossFit, where CrossFitters from all over the world compete for the prestigious title of the "first man or woman in the world".

Debuting in 2007, the CrossFit games are interesting to watch, as the competition details are kept secret until the actual day. The secrecy prevents participants from training for specific events, so their overall fitness is put to the ultimate test.

This goes in line with CrossFit's goal of achieving elite fitness and being able to handle whatever the world throws at you.

Elite CrossFitters participate for a shot at glory, while viewers watch to see what challenges are presented and participants overcome them. The games are also a great way for CrossFit to celebrate their most hardcore supporters.

"Did you catch the CrossFit Games last week? Those guys are insane! Makes me want to work out right now."

Word-of-mouth pro tip: The CrossFit Games were only possible after CrossFit had gained substantial popularity and recognition, so don't fret about not having the means to do something of that scale.

Organizing contests on social media is a great way to get customer engagement, thank your loyal fans, and generate buzz for your brand.

Threadless is one such example of how contests can help spread word about your brand.

3. CrossFit's decentralized concept is easy to replicate, allowing gyms anywhere to get a license and teach CrossFit.

CrossFit's affiliate system allows them to spread their name rapidly throughout the world, at relatively low cost too.

Once certified, trainers are allowed to teach CrossFit without the need for franchising fees.

This gives personal trainers and gym owners instant recognition for teaching something that's already well-known and sought after.

Moreover, trainers are given the freedom to express themselves by creating their own WODs.

"Yo, did you see what happened to that gym across the street? It's now filled with gymnastic rings and pull up bars. You wanna go check it out?"

Word-of-mouth pro tip: Many customers would love to be a part of a company that they like, so giving them that ability is sure to attract them.

Black Milk clothing is one such brand that empowers their fans by allowing them to create and manage their own fan clubs.

4. Crossfit allows individuals to bond through suffering and celebrating their achievements together.

CrossFit boxes only organize group classes, so no one gets to work out on their own with their headphones on. This forces people to be a part of a community, where everyone suffers together.

People who work out together are motivated by each other to do better, and makes the workout much more enjoyable.

As they make friends and have fun, people feel more motivated to go back each time for more.

"Hey, I made a group of friends at the box, and they're super-encouraging! Do you want to join me for my next WOD?"

Word-of-mouth pro tip: Social media platforms are a good way to engage your community. Utilize Pages, hashtags and forums when building up your community.

5. The CrossFit story represents an underdog rebellion against the traditional mainstream fitness culture, which makes it worth rooting for.

Greg Glassman founded CrossFit because he was unsatisfied with traditional fitness methods. His advocacy of constantly-changing workouts was in opposition of traditional systematic routines.

So was his emphasis on functional strength and his incorporation of bodyweight and olympic exercises.

As a result of its freshness and effectiveness, CrossFit enjoyed the rapid expansion and popularity of the fitness movement. It was slowly becoming a challenge for traditional gyms worldwide; not to mention that some of those who became affiliate CrossFit trainers were gym owners.

Everyone loves and roots for a good underdog story, which they will tell their friends about.

"Hey, did you hear about this cool new fitness movement called CrossFit? It's totally different from a normal gym, but I heard it's real effective!"

Word-of-mouth pro tip: Stories elicit powerful emotions, which is a powerful driver for word-of-mouth. Communicating a strong brand story not only serves to tell your customers what your company is about, it also attracts those who support your values.

Here are 7 other brand stories that inspired and won customers over.

Over the years, CrossFit has become something like a cult.

The level of passion and love fans have for the movement has led to numerous parodies of CrossFit, which only serves to spread the name further.

All this is further proof of CrossFit's word-of-mouth success, which has been a result of many different elements: