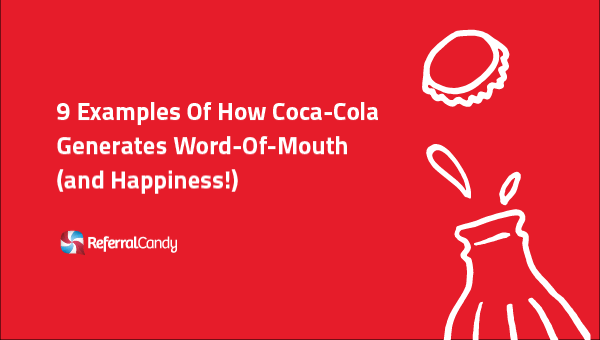 Coca-Cola is one of the most recognized and beloved brands in the world—the same world crying out about the ills of sugary soda on our increasingly rotund youth and children.

The most famous soft drink in the world has done an amazing job of creating and maintaining its identity as a deliverer of happiness and unity.

Word-of-mouth has a big part to play in their success. After all, Coca-Cola’s “thing” is all about bringing people together.

We’ve gathered the best examples of word-of-mouth marketing from Coca-Cola’s extensive library for your reference.

Who better to learn from than the best?

1. The origins of the Coca-Cola empire were built on word-of-mouth

In 1888, business mogul Asa Candler took over Coca-Cola. Back then, it was a five-cent soda fountain drink that sold only about nine glasses a day on average.

Candler gave away coupons for free Coca-Cola to consumers. He then gave free barrels of Coca-Cola syrup to stores reluctant to stock this drink. As customers with coupons flocked to those stores, store owners quickly returned as paying customers.

And thus, one of the most powerful brands in the world set foot on the path towards its destiny.

By incentivizing both retailers and consumers to talk about Coca-Cola, Candler was able to generate buzz and build his brand.

There’s no way this list could go without the legendary “Hilltop”, an ad that recently reentered the public consciousness after being featured in the series finale of AMC’s Mad Men.

Coca-Cola’s “Hilltop” was an advertising jingle that had the whole world singing along. The song was so popular in fact, that troves of people were calling radio stations and requesting the commercial be played.

It featured a “Chorus of the World”, a gathering of people of various nations' ethnicities singing the song “I’d Like To Buy The World A Coke” on a hill.

The ad was a celebration of tolerance and unity and the origins of the marketing flavor Coca-Cola would embrace for years to come. (Coke would repeat this idea 43 years later with their AmericaIsBeautiful Super Bowl ad).

“Hilltop” was a heartwarming ad that appealed to the socially progressive values that were prevalent in the era.

It also helped that it was a beautiful song that was incredibly well-received. It’s hard to ignore a song flooding the airwaves and sung by your neighbors!

In 2012, Google partnered with Coca-Cola to reimagine “Hilltop” for the mobile era.

Users could record a message and send it with a can of Coke to a recipient at the special vending machines. Recipients could say thanks by responding with a video or text message.

The original “Hilltop” remains one of the most well-known ads of all time. Many millennials (like myself) have heard of the original jingle through our parents.

Appealing to nostalgia and staying true to the ideals of connectivity and unity, people were happy to share stories about the campaign.

3. Coca-Cola Made Music From The Sounds Of A Generation

“Move To The Beat” is a campaign with music at its core. Grammy-winning producer Mark Ronson and songstress Katy B joined forces to produce “Anywhere In The World”, the anthem for the campaign.

What made the song special was how it was produced. Every beat and chord in the song was sampled from the sounds of five young athletes’ training.

Promotional material comprised of the stories of teenage athletes and their dedication to their sports.

A “making-of” video series was released with the music video for “Anywhere In The World”.

Combined, they received over 25 million video views across desktop and mobile and a total of 245 million search impressions.

The campaign focused on the stories of millennial (teenage) athletes and cast them in a positive light, much unlike wave after wave of content lambasting the generation.

This resulted in content that deeply resonated with the most vocal of audiences. Millennials felt pride in sharing the content either as a rallying cry for their generation or as a message of defiance to their doubters.

In the rapidly growing city of Guangzhou, with the help of the Coca-Cola company, photographer Kurt Tang wanted to address the “dispiriting sense of isolation and loneliness” experienced by the city’s urbanites.

Coca-Cola’s friendship experiment was a series of photographs and videos featuring what appeared to be best friends celebrating their friendship.

The twist? These people were complete strangers just 10 minutes before the photos were taken - they had bonded over Coke.

The photos and videos ran on Chinese social media sites like Weibo and RenRen and were well received, drawing comments like “有创意，赞!” (“Very creative, great!”).

People talked about the campaign because its optimistic message addressed the hot topic of social isolation, something much of the target audience could relate to. It was a feel-good message consumers were happy to spread.

5. Coca-Cola's Polar Bears React With You To The Superbowl

During the 2012 Superbowl, Coca-Cola didn’t choose the traditional route of TV advertising.

Estimating that 60% of users would be using a second screen during the game, Coca-Cola had a family of their Polar Bear mascots react to the game in real-time over rich digital media banners and a microsite.

Digital puppeteers controlled the mascots, making them laugh when a funny ad was screened or covering the eyes of their cub when racy content appeared. The bears even whipped out their phones when responding to audience tweets!

After the game, fans could send videos of the bears with a coupon for free coke to their friends. The message? Coca-Cola makes for a great celebration… or consolation.

The result was a resounding success. 9 million consumers spent an average of 28 minutes engaged with the Polar Bears that night. Coca-Cola also saw its Twitter followers grow by an incredible 38% over a 4 hour period.

Unfortunately, most ads are uni-directional monologues. Coca-Cola’s Polar Bears was a two-way conversation that delighted consumers who in turn, spread that delight to their friends.

Coca-Cola was the biggest sponsor of the 2014 World Cup. Of course, the company took the opportunity to tell the Coca-Cola story.

“Everyone’s Invited” centers around a 2-minute film titled “One World, One Game”, which tells the stories of four football teams from Otsuchi, Japan; Eastern Europe, the Amazon; and Ramallah, Palestine, areas recently stricken with disaster.

The stories showed how football could unite, bring joy and give strength to communities in the face of tragedy.

Coca-Cola then brought the stories to a crescendo, surprising the teams with invitations to the 2014 World Cup.

Committed to taking the heartwarming story further, Coca-Cola flew a total of 1 million fans from over 90 countries to be part of the 2014 Brazilian World Cup.

Coca-Cola created emotional content that truly celebrated how football could change lives and communities while weaving its brand deep into the tale.

These were moving stories that made, according to many YouTube comments, viewers cry. People love sharing emotional experiences and spreading the story with them.

Coca-Cola’s "Happiness Machines" were unique vending machines spread across the globe in unassuming locations. The machines required users to interact with the machines in unorthodox ways to get a free Coke.

The reactions of delighted participants were filmed and released as a series of videos across multiple platforms.

The videos earned millions of views and strengthened Coca-Cola’s image as a brand that spread joy.

People could escape the mundanity of day-to-day living vicariously through the joy and delight of the participants.

Excitement is a great emotion, one most would be happy to share.

Millennials tend to use their mobile devices frequently but only for extremely short periods each time.

The “Ahh Effect” campaign was designed and built entirely around their mobile habits. A microsite was released with 61 pieces of branded micro-content each designed to be consumed in one sitting. Every piece of content was designed to give the satisfaction of sipping on a Coke, an "Ahh".

Each of these branded experiences was designed to be fun and quirky. One game, for instance, has players herding an ever-growing number of cats with a laser pointer.

The campaign understood how its target audience interacted with a platform and designed everything around that. People tend to appreciate content created especially for them and are likely to share it with others like themselves.

9. Coca-Cola's Got A Coke With Your Name On It

The "Share A Coke" campaign revolved around Coke bottles with common names (e.g “John”, and “Sarah”) printed on the labels of Coca-Cola bottles. The labels encouraged consumers to “Share A Coke With” a friend of that name. Word of the special bottles exploded on social media as consumers snapped thousands of pictures of their bottles of Coke.

The campaign began in Australia and turned out to be a massive hit. It has spread to 70 countries since.

It was a simple premise with spectacular results—the “Share A Coke” campaign revitalized Coca-Cola's plummeting sales, leading to its first sales growth in over 10 years.

Our names are one of the most personal things we have. These specially labeled bottles delighted consumers - it’s a personalized bottle of coke with their name on it!

It also gave consumers an opportunity to share that delight with their friends. Ultimately, this campaign worked because it capitalized on the global trend of self-expression and sharing (as evidenced by the rise of social media).

Let's review what made people #ShareaCoke:

These principles can be applied when thinking about maximizing word-of-mouth for your own business, even if you don't have Coke's scale and resources.

Here are some articles that we think might be of interest: