YouTube is becoming an incredibly popular way to earn money online. Unfortunately, if you are relying solely on adsense from your videos as an income, you may be sorely disappointed in the payout. The best way to earn money from your YouTube channel is to combine it with merchandise. More and more influencers are turning to YouTube marketing to promote their brands.

YouTube personalities can spend months or even years building their audience. This can be done with simple daily vlogs or niche specific, target how-to videos. Either way, the route to a following is to consistently create videos and connect with your audience. When you connect with your audience, people tend to like and trust you. They will want to be like you and own something that you endorse.

Those with large followings are recognized as influencers. As influencers become their own brand, they start to market other products. This is a great strategy. The following statistics support the effectiveness of influencer marketing.

Shawn Johnson East did a lot of work to create her popular YouTube following. She collaborated with other YouTubers that were in the gymnastics niche that also had YouTube channels. The benefit of collaboration is that your followers are introduced to another channel’s followers. Both channels tend to get an increase in views and followers after a collaboration. Shawn Johnson East collaborated with Nile Wilson, a British Olympic bronze medalist with almost 1 million followers and his own clothing line. This helped her following become international. She also reached out to younger gymnast vloggers, such as the popular Bratayley channel, which currently has over 6 million subscribers now. This was a smart move. Among teens, YouTube stars are perceived as seventeen times more engaging and eleven times more extraordinary than mainstream stars (Source: Variety). By collaborating with a preteen and getting exposed to her audience, Shawn Johnson East was able to generate a younger following of her own.

Collaborations can come in the form of tutorials, fun activities with other YouTubers in the same niche, interviews on relevant topics and exciting challenges and contests. Collaborations between YouTube channels can increase the followers loyalties as they spark and generate more interest in the niche and topic.

YouTubers who have built up a decent following will announce their ecommerce store with a store launch video. Often they will create an unboxing video and display the products that they will feature in their store. This is a great youtube marketing tactic because when you launch your online store, you will already have a bunch of loyal followers who will check it out.

Recently, Shawn Johnson East, an American Gold gymnast launched her own clothing line. Her channel currently has 611,400 subscribers, so that is a good base for sales. She announced that she is launching her fyt brand in her most recent video. She included the link to her shop in the description and directed her viewers to check it out in her channel.

During this video, she also explained the quality and the style choices. She explained that there will be an exciting new item added to her store each month to keep her followers interested and continually buying from her.

Meejmuse makes the most of her 479,000 subscribers by creating monthly videos that review her favorite beauty products. The videos are pretty simple. She discusses why she loves the product and demonstrates the colors and features during her video. She introduces her audience not only to the brushes in her Shopify store, The Muse Beauty, but other beauty products that she discovers as well. She includes links to the other products in her description. This helps to build trust with her audience. They don’t feel as though she is only promoting her store and out to make money.

The YouTube channel is an excellent place to announce that you are doing a sale. Meejmuse created a reason to celebrate in September, it was her mother’s birthday on September 11. She announced during her August Favorites video that she would be sharing the joy with her audience and creating a special ten percent off during the whole month of September.

By sharing the special event of her mother and William’s birthday with her fans, she helped to build the trust and support of the audience. She used her video to display the code, but it is also found in the description below the video for fans who didn’t catch it the first time – 10% code: GRUMPS through September 2018!

There is a social media platform for every personality type out there. For some people, they find it easier to connect with people in 150 characters or fewer on Twitter, others flock to Facebook for funny dog videos and political commentary. You can share YouTube videos across all platforms to increase brand awareness. As Facebook fans share your videos on that platform, they can increase your brand awareness. They can also help your video to go viral.

One of the simplest and easiest strategies for cross channel promotion is reminding your followers that you have other social media accounts. Often at the end of the videos, YouTubers will remind you to look in the description below the video to find them on the other social media platforms. This is also a great place to put the link to your eCommerce store. A more subtle approach to cross promotion is to use the space that is your bio to mention which other networks to find you on.

Ryan Higa (also known as NigaHiga) has an extremely popular channel with over 21 million subscribers. In viewing the video, he doesn’t seem to have a lot of calls to action or even mention his store in his videos. However, he does consistently put out content and each video is linked to his store and other social media platforms.

As you can see below, Ryan Higa makes use of his description to notify his viewers on his book, his store and other social media channels. 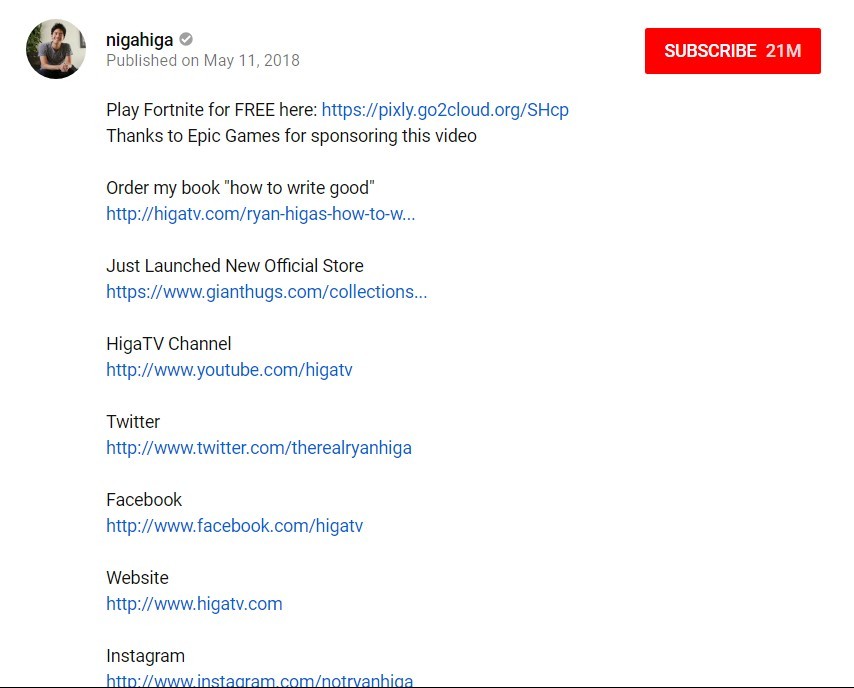 Ryan Higa is getting views not only on YouTube, but thought Facebook. If you look at the lower left-hand corner of the image below, you can see that 677 people watched the video after discovering it on facebook and reacted to it with a like, smiley face or heart. It also received 15 comments and 10 shares. Therefore, his audience is sharing videos from his channel with their friends. While Facebook shares don’t directly promote Ryan’s ecommerce store, it does increase the likelihood that the viewers will become followers and eventually check out the store and make a purchase. 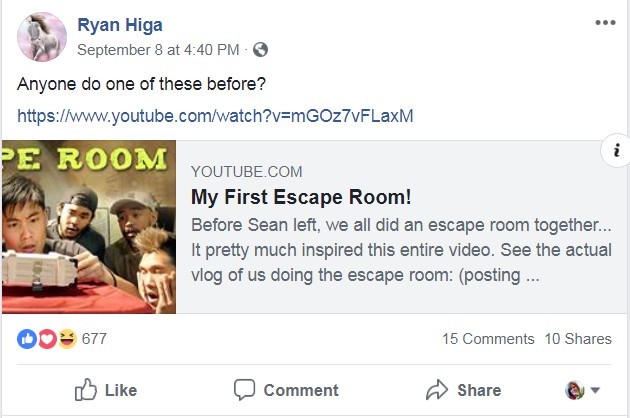 Smosh is doing a great job of cross promotion as well. It currently has a subscription base of 23.1 million. Smosh originally started as a comedy duo in 2005, but grew to a veritable internet empire, which includes a website, a gaming arm, and a feature length sci-fi flick. They create comedy sketches and the co-founders Ian Hecox and Anthony Padilla have earned praise for doing celebrity pranks as well.

From the image below, you can see that they have picked up 3.08 million twitter followers. Their followers are liking, retweeting and commenting on their videos, which increases their online presence. While they don’t always wear the merchandise in their videos, they do provide a link to their store in the description of their videos. The Smosh branded clothing helps to create more awareness of their brand and increase their following. 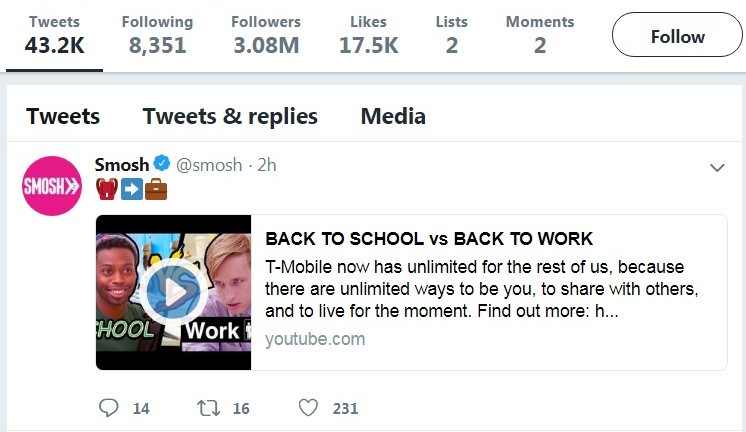 Instagram is not just for pictures, it can be a great place to increase your online presence and market your brand. Wong Fu Productions is very popular on YouTube. Wesley Chan of Wong Fu also has his own ecommerce store, “Base Grey,” which he actively promotes it on his Instagram. They use gifs on Instagram stories. As you can see below, they promote the latest sketches on Instagram.

For more information on cross channel promotion, check out the Top Tips in Improving Multichannel eCommerce through online communication.

Wearing the merchandise in your videos can help to promote your brand, but also encourages your fans to want to wear the same thing that you do. In the picture below, you can see a member of Wong Fu wearing their own merchandise.

Fitness professionals often wear their clothing in their videos to promote their brand. In the example below, Nile Wilson, a British Olympic bronze medalist is teaching his family some gymnastics moves. As you can see, he has all of his family members wearing his “Train Smart | Keep it Real” merchandise. Every time the influencer wears the merchandise, it increases the awareness of the brand.

While influencers tend to have a nice large audience, they often don’t have the connections that can help them monetize that audience. Often small and midsize brands are unable to afford partnerships with the hottest talent, so they can collaborate on endorsements and product placements. However, there is a company, FameBit that helps to match influencers with Shopify stores that need promoting.

FameBit has over 31,000 influencers who have more than 20,000 branded videos. FameBit is partnering with Shopify to help influencers create their own stores.

Influencers can now build a business beyond the YouTube Adsense ads with Shopify’s e-commerce platform, which incorporates easy to use buttons and sales widgets. FameBit creators gain access to Shopify VIP, which is an exclusive service that provides the infrastructure and customer management support for social media influencers. They can easily launch a multi-channel store, receive guidance from a personal concierge and generate donations to charities of their choice.

The partnership effectively allows social influencers to build a business off their brand beyond ads, branded content, and social partnerships, to selling their own products. While Shopify’s e-commerce platform incorporates easy-to-use buttons and other sales widgets (and these will certainly be part of the offering), with this arrangement FameBit creators will get access to Shopify VIP, an exclusive service that provides the infrastructure and customer management support for social media influencers. This includes the ability to launch a multi-channel store, receive guidance from a dedicated personal concierge, and generate donations to a charity of their choice.

FameBit is helping influencers expand their own personal brands and provide them with the tools that they need to further monetize the massive influence that they’ve built. This also helps small and mid-size brands learn about and test influence marketing at scale, which will ultimately provide even more native branded content opportunities.

As you can see, YouTube marketing, combined with other social media outlets has many promotional opportunities for people who have an online store. You can get creative with your brand, partner up with mid-sized stores to increase their traffic and your income and grow you audience with collaboration. Strategic placement of your merchandise in your videos can improve your brand awareness as well as your merchandise sales.

Melinda is a blogger at ReferralCandy. She loves learning about internet marketing and maintaining her own fitness blog. She enjoys running, swimming, dancing and Pilates.

eCommerce SEO Best Practices in 2020 You Can Actually Do Today)

In the big sea of ecommerce stores, it is difficult to make yourself noticed. That’s why ecommerce seo is so important. Mastering search engine optimization, or SEO, is key to allowing customers to find your brand...

How To Improve Email Deliverability of Your Emails – in 5 Easy Ideas (+FAQs!)

This guestpost was shared by our friends at Mailtrap. One of the most annoying things that any eCommerce business faces is emails that fail to be delivered. Oftentimes, these are very important emails – account or...