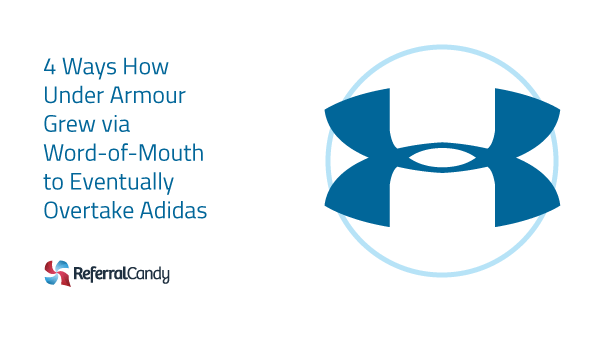 Founded in 1996 by former football player Kevin Plank, Under Armour has been the embodiment of willpower, strength and drive.

In January 2015, it was reported that Under Armour had beaten Adidas for the no. 2 spot in US sportswear market in 2014.

So how did Under Armour, a company that started out from Kevin Plank's grandmother's basement, grow into a force that could outsell Adidas?

1. Founder Kevin Plank created a product to solve a problem he faced, which got athletes excited and talking about.

It was so good that in 1998, Barry Bonds, a famous baseball player, was constantly seen wearing Under Armour products, even though they hadn’t sent him any.

Pleasantly surprised by him always wearing and talking about their products, the Under Armour team approached him. They eventually managed to convince him to do a photoshoot for them.

It isn't hard to come up with a product, but creating a product that is useful and helps your target consumer get better at what they're doing (e.g. better performance during a football game) is a different story.

That requires an understanding of your customers' pain points (e.g. sweaty and heavy undershirts) and a solution that is really effective.

Although Under Armour has become a $1 billion brand by selling to consumers, I created it as a product for elite athletes.

2. Gave out free shirts to individual football players, and ended up getting sales from 2 NFL teams.

Having a network of professional football players was a huge advantage for Kevin Plank, as he was able to let them test out his products to see if they liked it.

He's tell them about the product and if they sounded interested, he'd send them a couple of shirts to test it out. He gave an extra shirt so the player could pass it to his teammate if he personally liked it.

I tried to emphasize that if an Under Armour shirt could help these athletes improve their performance just a little bit, they’d be able to earn even more money. I positioned wearing it as a tool to help them rather than a favor to me.

Kevin's plan was that once a few players started wearing their products and talking about them, the team would feel "obliged" to buy them for everyone.

And that was exactly what happened: the Georgia State football team soon approached Under Armour to outfit their players, followed by Atlanta Falcons, the New York Giants and the Miami Dolphins.

Selling to Miami Dolphins was a great move, as their match was televised on national tv, which helped to bring out the Under Armour name.

When Kevin gave out the free shirts to individual players, he made sure to include an extra one for "the guy with the locker next to yours".

This made it the word-of-mouth process a lot faster and more effective, as the player who was sharing could easily go, "hey, just put this on and you'll know what I'm talking about."

His teammate can try it on and instantly experience the product for himself.

We're not asking you to give out free products to your customers per se, but giving them a discount coupon or some freebies would help sweeten the deal.

It is a nice generous gesture, and their friends would be more likely to try it out when there's a discount.

3. Transformed their female marketing strategy from failure to success with their "I Will What I Want" campaign.

Since its inception, Under Armour has been perceived as an extremely masculine brand, with most women viewing it as being male-centric.

Under Armour's approach to female apparel was always kind of an afterthought, where products were simply adapted from men's apparel and made to look slightly more appealing to females.

Dubbed the "shrink it and pink it" strategy, it proved to be ineffective until they changed their focus.

Women want to be treated the same way men are, and the "shrink it and pink it" strategy was both patronizing and demeaning to them.

Under Armour understood that, and focused on the strength and endurance of their will and bodies.

Together with their more recent "I Will What I Want" campaign, featuring ballet dancer Misty Copeland, Olympic skier Lindsey Vonn, supermodel Gisele Bundchen and others, Under Armour's ads for females shows female athletes overcoming their adversities and pushing on.

The common "shrink it and pink it" strategy is an example of marketing without a clear understanding of your customer mindset. Under Armour's switch to portraying females as strong and tough was exactly what female consumers wanted to be seen as.

4. Under Armour held a competition to find their "Ultimate Intern", which attracted 120,000 Facebook fans and 4,000 Twitter Followers.

In 2011, Under Armour announced a Ultimate Intern Program – where students could apply, go through a series of challenges, and the winners would get to work with them during summer, helping the brand to communicate their values and messages through social media.

But what's also impressive was how the event helped the company to break through their one million follower-mark.

The success of their first Ultimate Intern Program encouraged them to host another for 2012 and one more in 2013.

Contests help you generate buzz for your company, and if the prizes are attractive enough, a lot of people will definitely try to participate.

Bonus points if you're able to make them feel special and shine the limelight on them. Either feature them during the competition, or make them feed badass the way Under Armour did.

P.S. Under Armour might have beaten Adidas, but their sights have always been trained on Nike.

The graph below shows the difference in forward obligations between Nike and Under Armour:

They still have a long way to go, but given their ambition and drive, I'd say they have a pretty good chance to catching up.

Further reading: There are heaps of great ways to marketing through sports, check them out here in our sports marketing examples.