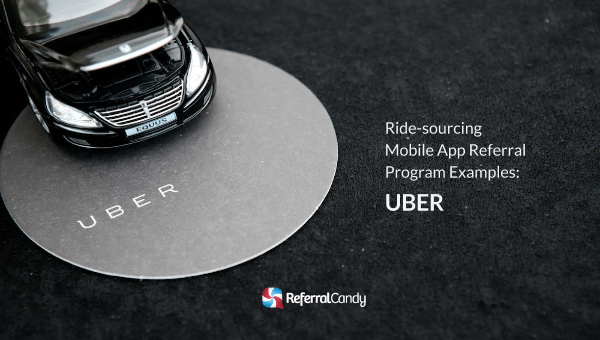 Most of you have must have encountered this scenario before:

You're in a big city, and you're running late. You try to hail a cab, but all of them are busy. After 15 minutes, you either get one or give up trying.

As origin stories go, Garrett Camp and Travis Kalanick were having that exact same problem 10 years ago in Paris. They "vowed then and there to solve the problem with a revolutionary new app."

That app would eventually be called Uber.

In early 2012, Uber started expanding outside of the US. Since then, Uber has since expanded to more than 60 countries and 400 cities.

So how did Uber set out to solve the taxi crisis, and expand their user base so quickly?

(NOTE: Want to set up a referral program like Uber? Then try ReferralCandy free today.)

Uber started off with a product that addresses a deep-seated problem.

Uber has two mobile apps: one for Uber passengers, and another for Uber drivers.

For the passenger app, users simply create an account using thier email, enter their credit card details in advance, and they'd good to go. To book a cab, they simply press a button, and an Uber car will soon arrive.

For Uber drivers, they can use the app to pick up customers with the press of a button too. Simply go "online" and they're ready to pick up passengers.

What Uber did was provide a fuss-free solution for customers and drivers. By being able to provide a solution to such a widespread problem, they were able to strike the hearts of many, and get them to try it out.

As Bill Gurley of Benchmark, investor for Uber and eBay says,

The product is so good, there is no one spending hundreds of thousands of dollars on marketing.

1: They have two separate referral programs for drivers and riders

Because of Uber's unique position as a middle-person connecting crowdsourced drivers and passengers, they have two separate different referral programs.

For riders, the referral program is fairly straightforward: sign up for an Uber account, and you'll receive cash credits you can enjoy for your first ride. Refer your friends to sign up for Uber using your code, and the two of you will each enjoy a referral reward in credits.

At one time, Uber offered $30 in referral credits, which was enough to cover multiple rides. (It now offers $5 for a referral.)

However, in order to combat the demand-supply issue, you need more drivers. As such, Uber's strategy for attracting more drivers is very special:

A. Referral rewards for referring other drivers (and even riders)

Driving is their job, so rewarding Uber drivers with cash is a no-brainer. However, giving Uber riders ride credits incentivizes their next trip, ensuring that they'll return to use it.

They can even order their own customized Uber business cards:

Personally, I think it's a smart move to include a referral reward for drivers to refer riders. It is almost certain that drivers will have both potential Uber riders and drivers in their circles.

Having another referral system to refer potential Uber riders ensures that you leave no stones unturned.

B. Referral rewards for being an ex-Lyft driver

Lyft is one of Uber's biggest competitors, and Uber offers a referral reward for drivers who used to drive for Lyft.

Uber has understood that customers belonging to your competitors are still potential customers. All they need is proof that your company is better.

However, there is a way to game to system. Lyft drivers can sign up for Uber, earn the rewards, then go back to driving for Lyft.

But it might not matter that much for Uber, as their aim is to let as many drivers try out Uber as possible. They trust that the drivers will be able to tell which company is better for them.

This suggests the amount of confidence Uber has in their product.

2. Being aware of the nuances of specific cities and time periods

The taxi problem varies from state to state and between countries. Hence, the referral incentives for one state might not be sufficient in another state with a greater need for Uber drivers.

So, it makes sense for Uber to tweak their referral rewards and referral rates to suit the unique demographics for each state and country.

Uber's attention to the unique complexities of individual cities also allows them to be the first response when the need for their services arise.

During the Boston bus strike in 2013, Uber offered free rides for Boston Public School students to travel to and from school. They got a lot of positive publicity from it, and their popularity soared soon after.

This is also evident from Uber's local blogs and referral marketing. There are blogs focusing on every state and country that Uber is in, providing them with exclusively local events, deals, and special offers.