Word-Of-Mouth: How Qatar Airways Soared To The Top 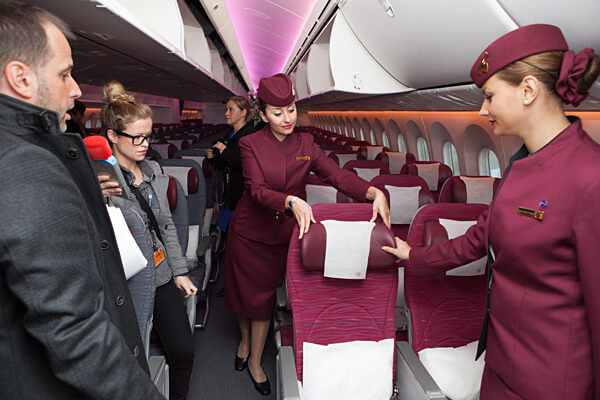 For all the bigotry and stereotyping Middle-Easterners face when flying, it seems deliciously appropriate that for the past decade, the world’s best airlines have been Middle-Eastern.

Today, Middle-Eastern airlines, from Etihad Airways to Emirates Airlines, dominate the sky. Beloved by fliers and vilified by their Western competitors, these carriers have become synonymous with quality (and affordable) flying.

In this pantheon of aviation, Qatar Airways holds a revered position.

Owned by the Qatari government and established in 1993, Qatar airways, despite its young age, has been consistently recognized and celebrated as one of the world’s top airlines.

Regardless of travel class, flying with Qatar Airways has been characterized as “intimate”, “personable”, “comfortable”, and “spacious”. Cabin crews and flight meals (yes, meals!) have also been consistently praised. Indeed, Qatar Airways appears to have earned its “World’s 5-Star Airline” marketing slogan.

Yet, quality alone didn’t put Qatar Airways at the top. Behind its glowing reputation lies a series of intricate marketing tactics, of which word-of-mouth plays a decisive role.

Let’s take a look at how Qatar Airways utilized word-of-mouth to its benefit.

As early as the 1950s (four decades after the Wright Brothers), the aviation industry had acknowledged the importance of word-of-mouth marketing in commercial flying.

Fast forward sixty years later, and that dictum remains ever relevant. Our choice of airline still relies much on the word of our peers, of past customers, and of our fellow travelers.

Qatar Airways recognized such behaviors. In 2011, it began to ask its customers a simple, yet profound question: “Would you recommend Qatar Airways to your friends and family?”.

Within months, the airline received tremendous positive feedback from its audience, identifying its advocates and the extensive capacity of word-of-mouth in acquiring new customers.

2. Sponsoring That One Famous Football Club That Didn’t Want Sponsors

Unlike most football clubs, the Spanish team FCBarcelona has vigorously opposed the idea of shirt sponsors for various sociopolitical and historical reasons. For more than a century, no corporate or commercial logo has appeared on Barcelona’s famous blue-and-burgundy jerseys.

Yet, in 2006, Barcelona, in a watershed moment, signed a shirt deal with UNICEF, agreeing to display the humanitarian organization’s logo on its jerseys. In 2010, the Qatar Foundation joined UNICEF on the Barcelona jersey. In 2013, Qatar Airways replaced Qatar Foundation.

By becoming the primary shirt sponsor of the world’s most popular football club, Qatar Airways raised its profile to stunning heights.

It has also gained some of the world’s greatest footballers as its spokespeople and advertising models.

Whenever Barcelona played and wherever its legions of fans went, the logo and imagery of Qatar Airways accompanied them. Thus, the airline became a highly visible element of modern sports.

3. Advertising For The Stars And Us

“We see our competition all the time, but we have a different strategy. We don’t like to copy anyone else. You have to be different, you have to have your own style.” — Salam Al Shawa, Qatar Airways’ Senior Vice President in Marketing and Corporate Communications

But for Qatar Airways, as Al Shawa tells, its advertising had to be more “down to earth and about the passengers”.

As such, the carrier launched its “Going Places Together” campaign. Featuring normal people, the ads have them traveling to China, New York, Doha, and of course, Barcelona.

At present, the commercial above has amassed eight million views on Youtube.

This two-prong approach to advertising keeps Qatar Airways at the forefront of pop culture and daily conversation. In other words, people cannot help but talk about the airline.

Among its contemporaries, Qatar Airways has perhaps, the strongest and most extensive social media presence. The company operates on 14 social media outlets!

One of Qatar Airways' many social media campaigns. Image courtesy of marhaba.qa.

Aside from Facebook, Twitter, and your other usual platforms, Qatar Airways is also active on Russia’s VK and China’s Weibo and WeChat. The latter three channels, despite their gargantuan reach and usership, are often underutilized by major Western corporations.

What’s remarkable about Qatar Airways’ social media outreach is its high rate of customer engagement and emphasis on flight information and brand imagery.

The airline regularly converses with its online fans on Facebook and Twitter, regularly offering them special discounts, promotions, and free tickets.

And every time Qatar Airways does that, it increases its online fandom by the hundreds of thousands, thereby generating spectacular amounts of referrals and word-of-mouth.

5. A Tough-Talking and Publicity-Generating CEO

Sure, being a firebrand has its downs, but don’t tell that to Akbar Al Baker, Qatar Airways’ CEO.

A reservoir of juicy quotes and quips for journalists, Al Baker doesn’t shy away from publicizing his company’s achievements.

When Qatar Airways sought to expand in the U.S. markets, the Qatari claimed that American airline carriers provided “crap service”.

In addition, he called Delta Air Lines, an American carrier, “wicked” after a Qatar Airways airplane was denied a gate at an American airport. He further said that he would “hang [Delta’s CEO] to the wall”.

Moreover, such statements were practically invitations to the American public to test and sample Qatar Airways, a somewhat handy action considering the latter’s rapid expansion into the American aviation industry.