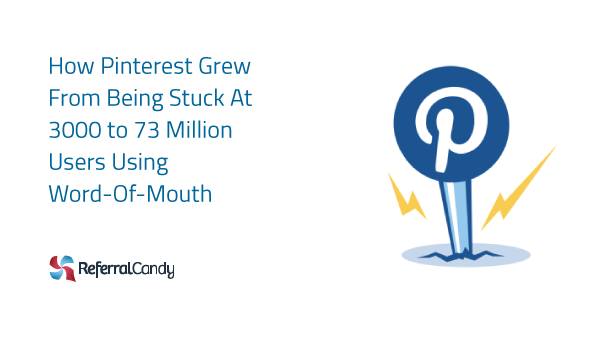 Pinterest is a tech company that doesn’t want to keep you online. Instead, it wants to inspire you to go offline and do the things you love.

It’s also a company that chose to specialize in images and timeless content when its entire industry was focused on being text-based and time sensitive (think Twitter).

Pinterest is a unique app with an equally unique growth story. From being stuck at 3,000 users to boasting a 72.8 million strong user base, Pinterest relied heavily on word-of-mouth to grow and turn into an absolute behemoth.

We’ve researched the key points of Pinterest’s growth and broken down the strategies used so you can do the same with your business, enjoy!

Pinterest owes much of its initial success to grassroots marketing and good olde traditional word-of-mouth.

Many of Pinterest’s first users hailed from Des Moines, the home town of Pinterest founder Ben Silbermann, learning of the app through Silbermann’s family.

Three months later, the startup found itself stuck at a ceiling of 3,000 users. Unable to find traction and grow its user base, Silbermann resorted to boosting Pinterest’s population by finding others like himself - “power users” who would use Pinterest as often and love it as much as he did.

The company organized meetups at local boutiques, handing out Pinterest invites and turning participants into the forerunners of their word-of-mouth efforts.

Pinterest’s initial user base comprised mainly of people involved in handicraft. These are social hobbies, known for having active communities - the stereotypical vision of sweet ladies gathering over cakes to crochet exists for a reason. A single member of a neighbourhood sewing club at a Pinterest event could potentially spark an entire suburb into using Pinterest.

Pinterest found the right audience who just so happened to already have tightly-knit (pun intended) communities in place for word to spread.

Bloggers each assembled boards based on a theme (e.g “What home means to us”) accompanied by a blog post. These blog posts were linked to posts from other bloggers, therefore “pinning-it-forward”.

These bloggers also released invites to Pinterest (the site was invite-only at that point in time). Readers were encouraged to make use of their Pinterest invites and remix the bloggers’ boards into boards of their own.

Pin-It-Forward made a comeback in 2013, this time targeting potential Pinterest users in the United Kingdom by featuring a lineup of influential bloggers from all over the country. Pinterest also added a UK English option to the site so users would feel more at home.

At the moment, Pinterest has evolved into a major player for fans of DIY and handicraft content, with viewership rivaling the DIY bloggers that once ruled the segment. These same bloggers were the participants of Pin-It-Forward.

Pin-It-Forward was essentially a transition of Pinterest’s grassroots word-of-mouth effort onto the internet, using community leaders to spread word of Pinterest to their fans, followers and contemporaries.

The 2013 version of Pin-It-Forward used a similar strategy, using local stars and community leaders to bring users to Pinterest.

Read next: 30+ examples of marketing to communities

Pinterest users tend to be very proud of their boards and with good reason. Pinterest boards are carefully curated collections that reflect taste and the ability to find what’s cool and fresh.

Often, they’ll include personal creative projects too. Many Pinterest users use the platform to chart progress on their own creative expressions.

Pinterest makes everyone a creator or a curator. Boards become an indicator of a user’s taste, creativity and personality - there’s a lot of self tied to these boards.

Users develop a vested interest in sharing these boards. One of the primary reasons people choose to talk about and share things is to show off. It’s a different brand of vanity from what you’ll find on most other types of social media.

Pinterest is not about creating a carefully curated, almost phony online persona. It’s a showcase of artistic taste and capability, something more palatable and thus more shareable.

Pinterest is the third-largest source of referral traffic on the Internet and generates 400% more revenue per click than Twitter. It’s transformed from “that app used by people who like arts and crafts” into a powerful platform for marketers worldwide.

Pinterest’s user base isn’t quite as massive as Facebook or Twitter, but campaigns involving the app are deeply interwoven with the app experience.

As businesses utilize Pinterest in their campaigns, users would either:

But the magic here goes beyond riding on the advertising of big businesses for growth. At the heart of things, Pinterest is an app that encourages sharing what’s dear to the user and that’s the reason it’s the powerful marketing tool it is.

Now for a quick recap of the lessons from Pinterest's strategies:

Finally, some questions to ponder:

Further reading: If you enjoyed this article, why not check out how Instagram became so successful just as Pinterest has.