The PayPal Growth Strategy That Catapulted Them To Success 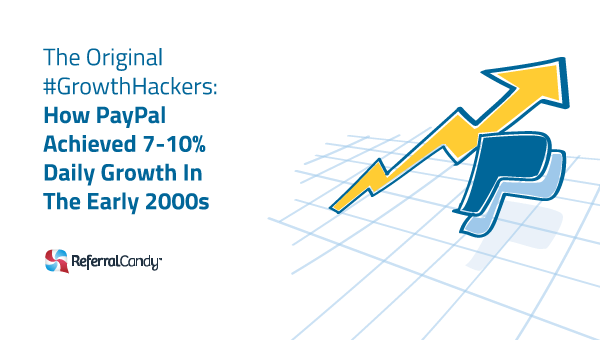 This might seem counter-intuitive: Why isn't the story of PayPal's referral program more popular than Dropbox's?

The simple answer is that the Internet just wasn't so big then. Social media wasn't a thing yet. PayPal's referrals happened almost entirely through email, blogs and IMs.

Despite that limitation, it was incredibly successful. According to Elon Musk, PayPal spent about US$60 million on its referral incentives. In 2015, the company had a market capitalization of US$46.6 billion.

Referrals helped PayPal get 7 to 10% daily growth, catapulting their user base to over 100 million members.

According to David O Sacks, original COO of PayPal, PayPal used to literally pay people to invite their friends:

"Initially users just had to sign up, confirm their email address, and add a (unique, authorized) credit card. The money was simply added to their account. This was real money. Users could send it to someone else or withdraw it. So it was a real cost to PayPal. We must have spent tens of millions in signup and referral bonuses the first year. (PayPal acquired 1 million users by March 2000 and 5 million by summer 2000.)

The bonuses were gradually phased out, first by reducing them to $5, then by adding more verification hoops (like bank account verification) so they became more difficult to get. Then they were eliminated altogether."

Here's a conversation between Salman Khan and Elon Musk about it that corroborates the story (you can watch the video here, starting at 11:20):

ELON MUSK: I didn't expect PayPal's growth rate to be what it was. And that actually created major problems. So we started Paypal on University Avenue. After the first month or so of the website being active, we had 100,000 customers.

SAL KHAN: Really? That fast. Wow, I didn't realize it was--

ELON MUSK: Yeah, it was nutty.

SAL KHAN: And how did it start? How did people just even know to use it? I mean, obviously, both buyer and seller have to be involved.

SAL KHAN: So much money did you all spend with that kind of $5, $10, $20 incentive to get that critical mass going?

SAL KHAN: Oh, wow, OK. So it was substantial. OK. So we're not talking peanuts here.

ELON MUSK: It depends on your relative scale. It's a peanut to Google.

SAL KHAN: Yeah. So it's not an outlandish-- I didn't realize that was so core.

SAL KHAN: That's true. You're right, that's inexpensive. It's nothing.

ELON MUSK: Relative to them, it's pretty inexpensive.

ELON MUSK: And then we did a bunch of things to decrease the friction. It's just like bacteria in a Petri dish. So what you want to do is try to have one customer generate like two customers. OK? Or something like that. Maybe three customers, ideally. And then you want that to happen really fast. And you could probably model it just like bacteria growth in a Petri dish. And then it'll just expand very quickly until it hits the side of the Petri dish and then it slows down.

Referrals turned out to yield substantially better marketing ROI than the alternatives.

Once PayPal achieved a critical mass of early adopters they dropped the Refer-A-Friend bonus for regular users, but they kept it for Merchants.

They dropped the Merchant bonus too, once they reached their target numbers.

Here's an excerpt from Peter Thiel's CS183 startup class describing how PayPal tried advertising and biz-dev, but ultimately found $20 for each new customer to be the lowest CAC:

"PayPal’s big challenge was to get new customers. They tried advertising. It was too expensive. They tried BD deals with big banks. Bureaucratic hilarity ensued. Over ice cream, the PayPal team reached an important conclusion: BD didn’t work. They needed organic, viral growth. They needed to give people money.

So that’s what they did. New customers got $10 for signing up, and existing ones got $10 for referrals. Growth went exponential, and PayPal wound up paying $20 for each new customer. It felt like things were working and not working at the same time; 7 to 10% daily growth and 100 million users was good. No revenues and an exponentially growing cost structure were not. Things felt a little unstable. PayPal needed buzz so it could raise more capital and continue on. (Ultimately, this worked out. That does not mean it’s the best way to run a company. Indeed, it probably isn’t.)"

If it worked so well, why did they remove it? An educated guess: Fairly straightforward cost-benefit analysis.

"As the network got bigger and bigger, the value of the network itself exceeded any sort of carrot that we could offer." – Elon Musk, PayPal cofounder

PayPal is a payments system, which is greatly dependent on network effects. The more people use PayPal, the more it becomes worth it to join the bandwagon.

Eventually, the number of people using PayPal alone would've been incentive enough for new users to sign up, rendering the incentive unnecessary.

Signups are free to do, and so it's practically a certainty that the system would've been gamed by eager opportunists.

For any other business, this would've turned out really, really ugly. PayPal probably factored in exploitation and misuse into the cost of customer acquisition.

Also, when you have MILLIONS of customers, the load on your infrastructure must be unbearably costly.

"It occurs to me now that PayPal is one of the few businesses where you could use a direct financial incentive like that and not have it be an excessively extrinsic incentive to use the site." - Yishan Wong, early PayPal employee, now CEO of Reddit [source]

What are the implications for regular businesses running referral programs of their own?

For ecommerce businesses, you should incentivizing the purchase, not the sharing or signup.

If you pay people to share or signup for an account, you'll end up with loads of shares and signups, but few purchases.

Worse still, the high-quality influencers that you want to court will get turned off by the spammy behavior associated with your product.

So definitely don't do that.

For some quality examples of referral programs in ecommerce, check out the ecommerce section of our best Referral Program Examples post.

This is the responsibility of anybody running a business, and you probably shouldn't outsource it to anybody else.

If you make a $20 profit on a product, giving a $10 referral reward is very reasonable for every successful sale. You still profit AND get great marketing.

You may be tempted to sacrifice more profits for greater reach, but you may face diminishing returns. You'll have to study your costs very carefully, and experiment prudently.

Read next: What Is The Return-on-Investment (ROI) for Referral Programs?

Ensure that your product/service is compelling even without any added incentives.

This should go without saying! The most succesful customers we have at ReferralCandy already had strong traction and some word-of-mouth before they added their referral program.

Referrals are a multiplier for something great.

Learn more: How To Get Word-of-Mouth: 40+ Successful Examples To Learn From

Referrals worked great for PayPal, but that doesn't mean your business will flourish if you give away money the way they did.

PayPal was taking hefty risks because it was trying to dominate a 'winner-takes-all' market, and there were people willing to finance such risks because of the potential returns.

There are plenty of ways to accelerate the growth of your business without throwing cash at the market.

An effective referral program has to have incentives that are not only substantial but relevant. Specifically, you want to incentivize the customer behavior that makes sense for your business.

Actionable steps to get the most out of your own referral program:

Make sure that your incentives are substantial:

People will refer a good product to their friends without incentives, but it's possible for incentives to be so low as to be insulting, tarnishing what would otherwise have been a gesture of goodwill.

As a super-vague rule of thumb, anything less than $5 is usually not worth the trouble for most customers. But it really depends on what you're selling. If it's an expensive product, the reward should be proportional.

If possible, make your incentives relevant to your product:

Ask yourself, what is the "lifeblood" of your product? For Dropbox, it was storage space. For World of Warcraft, it's in-game social proof. For PayPal, it's money. For Freemium games, it's in-game credit.

What about for ecommerce businesses? That's a challenge for you to solve, as an entrepreneur or marketer. But it's not an entirely unsolved problem; there are some clues. Do your customers want to feel stylish? Secure? Improve the environment?

Figure out what your customers really want, and tie your incentives into that.

PayPal's immense scale and growth -- as well as the success of its referral program -- might be difficult to replicate. But, it hasn't stopped companies from trying.

Step.com, a new startup aimed at digital banking for young adults and teenagers, announced their waitlist and launch with a referral program. It might only be a $1 reward as an friend offer and reward incentive, but that might be enough for it to go viral, just because the demographic is so hyperconnected in communities over Messenger, Telegram and Discord.

Part of the Step.com interface, with a prominent referral offer. Via Techcrunch

Remember, referrals aren't magic. They can only amplify what you already have.

You can't just create them out of thin air, you need to have a product that people actually want to talk about.

Once you've got that, the most you can do is to set things up such that it easier for your delighted customers to share their love for your product with others. That can make all the difference.