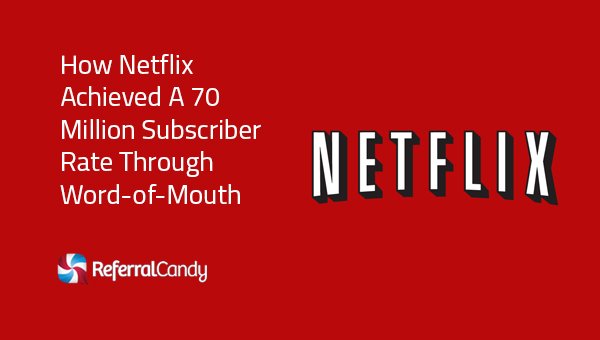 Chances are, you’ve seen it too.

(Just in case you don’t: it means to invite someone back to your place, using Netflix as a convenient and rather appealing excuse. Now you know.)

No need to thank us. Thank him and his huge bag of ice.

But, Netflix wasn’t always as well known as it is now. So what did it do to pull ahead of its huge competitors and become the go-to word for “home TV” and “a good time”? How did Netflix hit 137 million subscribers in Q3 2018, almost double the number of subscribers when we first wrote this article?

1. Netflix anchored itself in pop culture - with Netflix & Chill

The 'Netflix & Chill" term organically appeared in about 2010-2011, and started off without any innuendos.

However, with the meteoric success of Netflix as a company, the term was increasingly used and started evolving to a new meaning behind it as well, earning its Urban Dictionary definition.

What did Netflix do right? Instead of ignoring or worse, turning away from the term, they embraced it, posting a Netflix and Chill meme on its official Tumblr.

With this acknowledgement (combined with the power of the internet!), the term has become deeply embedded in the lexicon of pop-culture, even being referenced to in rap lyrics. Even parents are finding out about the term – proof that it's made it into mainstream culture.

The mere usage of this term - on Twitter, Tumblr or any social media gives free publicity via word-of-mouth to Netflix, and equates it to the go-to place for video streaming. Who cares about Hulu, when you can just netflix and chill?

It's like free marketing every time somebody mentions it. Hey, anyone want to #ReferralCandy&Blog?

2. Netflix conducted data research to find out what people want to watch - and how to watch

It’s simple, really. It made an effort to ask people what they want.

This is important, because your target audience usually have friends with similar wants. Build a good reputation for giving customers what they really want, and they’ll tell their friends who want the same thing.

(But if you build a reputation for not giving customers what they want, they’ll tell their friends too.)

Steve Swasey, VP of Corporate Communications at Netflix, agrees. He loves the catchy, effective Netflix ads, on which the company spends $200 million each year. But, he says, “the best marketing for Netflix continues to be word-of-mouth”.

Netflix’s slogan used to be “the best way to rent DVDs”. Barry Enderwick in Netflix’s Marketing department saw that this might not be all what users really wanted Netflix to be.

After his research in 2004, Netflix was repositioned as “movie enjoyment made easy” - which sounds a lot more like the Netflix we love today.

Also interesting: to better understand how people look for movies, Netflix "meticulously analyzed and tagged every movie and TV show imaginable." This gives them a tremendous amount of data about movies and what people like, which allows them to make better decisions about what to show and what to produce. This resulted in some strange and unique categories being grouped and put together, but that is only a testament to the impressive granularity of data that Netflix possesses.

Categories also exist with zero movies inside, including: Skiing Non-Fiction.

Their movie catalogue isn't the only thing they have extensive data on; they also capture users' viewing habits. A tongue-in-cheek tweet called out some users with, shall we say, unconventional streaming habits. Equally heartwarming was a story shared by a redditor, about how Netflix had sent him an email after he had streamed non-stop for a week to check if he was okay.

To the 53 people who've watched A Christmas Prince every day for the past 18 days: Who hurt you?

The deep understanding of customer streaming habits and preferences is Netflix's ace in the hole for understanding what customers want. Understanding that consumers love to binge-watch is why Netflix Originals often debut with the full series available immediately.

Unlike conventional network programming where shows are commissioned without much user testing, Netflix knew that House of Cards would be a hit -- by knowing how many subscribers who loved the original UK House of Card Series also watched David Fincher movies and Kevin Spacey movies.

Soon, Marvel content will no longer be available on Netflix, as Disney launches its own streaming service in 2019. As competition for streaming subscriptions heat up and media companies begin pulling their back catalogues from Netflix or charge more for licenses — which is also why Netflix has been creating and commissioning Netflix Originals. Netflix's Chief Content Officer shared that for 2018, 85% of new spending will be on original projects.

Having data about what consumers want to watch not only helps Netflix create crowd-pleasing content, but also serves as a way to tempt new showrunners to ink deals. On the heels of a US$300 million dollar deal with screenwriter Ryan Murphy, Netflix's Chief Content Officer shared a startling insight about how people who enjoyed Murphy's American Horror Story also enjoyed lighthearted comedy animation series Bob's Burgers.

3. Netflix avoided the trap of clinging to old products and ideas

Netflix started out mailing physical DVDs to its customers, but made the wise choice at the right time to move to streaming videos instead. Word-of-mouth spread the good news, and soon Netflix’s customer base swelled.

This sounds simple, but not many are able to follow Netflix’s example.

For example, some companies like Blockbuster doggedly stick what they did in the past (renting DVDs), because that’s what they’ve always done. At it’s peak, Blockbuster had nearly 9000 stores - they had only about 50 left by 2013.

4. Netflix built a good reputation for customer satisfaction by, again, actually listening to their customers

Bob, we’ve told you that painting the Netflix logo on a Blu-Ray player doesn’t count.

Even good guys have bad days. No one’s perfect… not even *gasp* Netflix. But how did Netflix bounce back from its mistakes?

In 2007, Netflix wanted to release a branded streaming device called the “Netflix Box”. Later in 2011, the company announced plans to have separate subscription plans from DVD rental and streaming. These plans were met with hostility, but time, effort and money were already poured into these plans. What’s a company to do?

Netflix didn’t stubbornly go ahead with its grand plans against its consumers’ wishes.

Realising the Box was not going to work, Netflix made the painful decision to scrap it. They made the embarrassing choice to not separate the plans after all. Ouch.

But why was this actually the good thing for Netflix to do? People were unhappy, but they knew Netflix was looking out for what viewers really wanted, rather than forcing fancy things on their home TV enjoyment.

This reputation helped Netflix tide over bad patches. Three years on, Netflix’s stock price is three times higher than its best showing in 2011, and they're expanding like crazy.

Does Netflix Have a Referral Program?

Netflix did use to have a referral program, but it was discontinued after they went digital. It was called the Tell-A-Friend, and began as a two-week free trial of Netflix's DVD-rentals-by-mail business.

According to a Quora answer by Barry Enderwick, a marketing executive at Netflix, the program was discontinued as Netflix moved into streaming content.

Does Netflix still rent DVDs by mail in 2018?

Netflix still rents DVDs by mail, but only in the US (and via their iOS app). DVD.com (which redirects to DVD.netflix.com) offers free shipping, free returns and no late fees for their subscription DVD rent-by-mail service.

DVD-rentals are still profitable, if in decline; Netflix generated US$280 million in the first 9 months of 2018, according to its Q3 2018 earnings report.

So, in fifteen seconds - how did Netflix knock out its competition and retain its customers through word-of-mouth?

Read next:  How Slack Grew From 500K to 1.7M Daily Active Users Within 8 Months

Or, head back to our Epic List of 77 Referral Program Examples!