Once Upon a Time...: 12 Narratives Used In Marketing 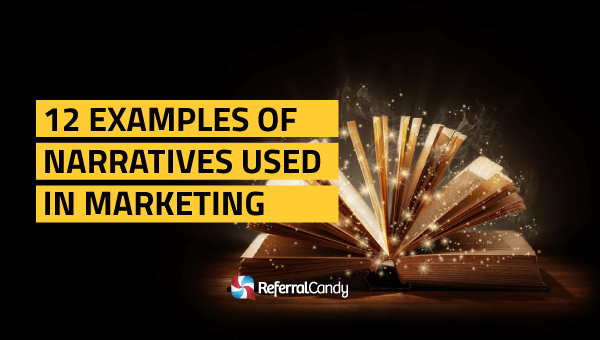 The last principle of the STEPPS model is Storytelling.

Why do we all love to tell and listen to stories?

So useful that, more than two thousand years later, Aesop's fables continue to be passed down today. And there are storytelling formulas people use to craft powerful messages.

Therefore, it is useful to package your brand message with a compelling narrative.

Here are 12 examples of brands that use narratives to get people talking about them:

1. The Panda Cheese panda is too compelling to be ignored.

In a hilarious series of ads promoting Panda Cheese, we get to see what happens when a panda gets angry.

The ads feature various people declining the cheese, after which a panda shows up and starts destroying stuff.

The ads received a few million views and even won several advertising awards.

Because the narrative is hauntingly funny, we all can't resist showing our friends the video of the violent panda.

This Wall and Chain video by Airbnb illustrates a real-life story of two men who used to patrol the Berlin Wall.

One was renting out his apartment, while the other was the father of the lady who was renting it.

They wouldn't have met if not for Airbnb. That's probably the best way to show us how Airbnb unites and connects people all over the world.

Sarah and Paige were both born with one arm, and their similar condition allowed them to bond and inspire each other. Despite being best friends for 8 years, they had never met in person.

Skype heard about their story and offered the two girls the chance to finally meet.

The video shows us how their product helped two girls forge a deep friendship that transcends distance.

4. The Girl Effect encourages us to act with the help of a 12-year-old girl.

The Girl Effect is a movement that focuses on adolescent girls being the drivers of social and economic change.

Their video explains how it all works through the journey of a 12-year-old girl.

We follow her story and empathize with her struggles of facing forced teenage pregnancies, poverty, prostitution, and sexual diseases.

By the end of the video, we are informed of how we can make a difference and help solve these problems.

5. Sainsbury recreates the famous truce in WWI to commemorate the 100-year milestone.

In 2014, Sainsbury showed an ad that recreated the iconic Christmas truce in the first World War.

The ad was in conjunction with the 100-year milestone, and the ceramic poppy art installation commemorating the same event.

By featuring an important cultural event at a moment where it's at the top of everyone's minds, the video was able to garner close to 17 million views.

6. Tesla is revolutionizing the automobile industry to make it cleaner and cheaper for everyone.

Tesla Motors is known to many as an automobile industry disruptor.

When their Model S showed up, it had a better range than other electric cars and came neck to neck with gasoline cars.

The brand represents a glimpse into the future of automobiles: free superchargers across the world, replaceable battery packs, and an incredibly smooth drive.

A desire for clean and sustainable industry, and to cut down unnecessary costs for the consumer.

These are just a few reasons why anyone would buy a Tesla.

Read next: Tesla's "$0 Marketing Budget" is a great marketing

Kitestring is a web-based app that notifies your emergency contacts when you fail to respond to a check-in message.

The reason Stephen Boyer created the app is very inspiring; he wanted to keep his girlfriend, who lived in a dangerous neighborhood, safe.

She lived in a dangerous neighborhood, and he wondered if there was an app that could make her feel safer.

After hearing this story, we are able to better appreciate his efforts, as well as those of other personal safety apps.

In 2006, 22-year-old Sophie Amoruso started Nasty Gal on eBay to help pay for her rent and her Starbucks Chai.

She sold vintage clothing she found from secondhand stores like The Salvation Army.

Her personal story and advice for fellow startup retailers are included in her book #GIRLBOSS, and serves to inspire many who have similar dreams.

Sword & Plough's name comes from a phrase in the Book of Isaiah:

They shall turn their swords into ploughshares, and their spears into sickles.

It refers to the concept of re-purposing military equipment and accessories into peaceful civilian applications.

Sword & Plough was founded by two sisters, Emily and Betsy Núñez, who grew up in a military family.

Witnessing the amount of discarded military surplus and the problems ex-veterans faced while transitioning back to civilian life inspired them to start the company.

They also employ veterans as a way to help them transit into civilian life.

In addition, 10% of all their profits go back to veteran initiatives.

For years, Mike Brown wanted to give his customers the strongest coffee possible to get them through their days.

After a lot of testing and tasting, he managed to create "the world's strongest coffee" – Death Wish Coffee.

It contains more than two times more caffeine than regular coffee; bound to power anyone through their toughest jobs.

Their reputation has allowed them to be featured on prominent media outlets like Buzzfeed, TIME, MTV, and Yahoo.

After being told that his obesity might kill him before he reached 35 years old, Jared Fogle decided to lose weight.

He tried different diets, but they all didn't work.

Eventually, he decided to try out Subway, thanks to their low-fat and low-calorie food.

He combined walking and his very own 'Subway Diet' – a 6-inch turkey sub for lunch and a footlong veggie sub for dinner and lost a total of 240 pounds.

When Subway heard about this, they ran an ad featuring Jared, becoming an instant hit.

Who doesn't want to hear about the guy who lost 240 pounds from Subway sandwiches?

12. 4-year-old Carson wants to be a UPS driver thanks to his special friend, Mr Ernie.

4-year old Carson has a special friend from UPS, Mr. Ernie. His condition requires Mr. Ernie to deliver packages to him twice or thrice a week.

When UPS conducted the Wishes Delivered program, they featured Carson in it, giving him his very own mini-UPS truck.

The sweet video that captured the moment has received over 3 million views and helped insert the brand into conversations.

Craft your brand message such that it is crucial to the story.

In all of the examples above, we cannot share the stories without mentioning the brand message.

The two Berlin Wall guards wouldn't have met if not for Airbnb, and you simply cannot share how Jared lost 240 pounds without mentioning Subway.

The life stories of some brands like Kitestring, Nasty Gal, and Sword & Plough also inspire us enough to share it with others.

The deeper you embed your brand into the story you're telling, the more likely people will think about you while telling the story!

In case you haven't, do check out the other five principles: