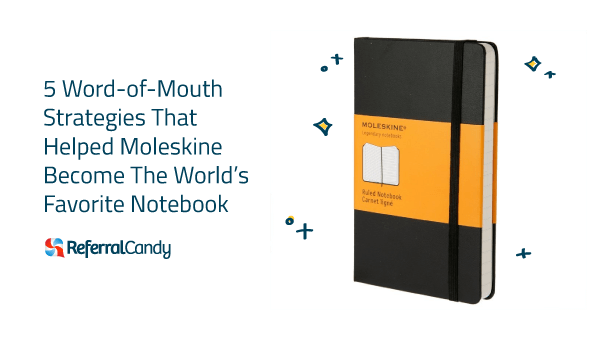 The Moleskine notebook is not an overly complicated idea, nor it is original by any stretch. It is the rediscovery of a legendary French notebook by a small Milanese publisher who, in 1998, put these books back into production. The notebooks are loved for what they symbolize: a free platform for creativity.

Today, they are coveted and beloved by designers, architects, writers, artists and travelers around the globe, with annual sales of over 120 million euros and registered subsidiaries in 7 countries worldwide.

1. Create a simple yet iconic design that appeals to all

The appeal of the classic Moleskine notebooks lie in the simplicity of its design: plain black cover with matching strap, and crisp ivory paper with the option of lined or blank. The Moleskine is understated, yet sophisticated. It communicates that the person carrying it is serious about their ideas, yet casual enough to slip them in their back pocket.

The Moleskine notebook is instantly recognizable, and therefore iconic, which works to the brand’s advantage as consumers tend to buy into the image projected by the product.

When it comes to word-of-mouth, it seems that the Moleskine is able to speak for itself; Owning a Moleskine tells the world that the user has refined tastes.

Read next: Keep it Simple, Stupid: 23 Examples of Simplicity in Marketing

2. Emphasize on heritage as a selling point

Early predecessors to the present Moleskine reportedly date back to the 19th century and have an impressive repertoire of followers; Vincent Van Gogh, Pablo Picasso, Ernest Hemingway and Oscar Wilde all had one.

Moleskines are so popular because we all crave to be a part of something larger, to share in a tradition that transcends us and involves people, places, or entities that capture our imagination.

In using Moleskine to scribble down our ideas, it's certainly more inspiring to feel like we're sharing in a tradition that brilliant minds have used for hundreds of years. It’s like having celebrities endorse your product, except all the celebrities are dead. Still works, though.

The historical heft affords the moleskine user some bragging rights, naturally, which would consequently influence similarly pretentious friends to covet one for themselves.

3. Loyal consumers are best endorsers of the brand, reward them with exposure on social media

The best endorsers of Moleskine notebooks are perhaps their users themselves. Scores of artists have uploaded onto the internet photographs of artwork in their Moleskines, which ostensibly endorses the (paper) quality and reliability of the notebooks.

In return, Moleskine’s social media team is happy to reward these artists for their loyalty to the brand with exposure on their Instagram page, which has some 45,900 followers.

Using social currency in this manner is a win-win scenario for both artists and the Moleskin brand.

Can’t get enough of Adina Tudor’s urban sketches on #myMoleskine. Come see more from her, and share your talent on moleskine.com/mymoleskine #Moleskine

4. Create a sense of exclusivity with limited edition designs

While the iconic plain Moleskine notebooks has its legion of loyal fans, the brand realizes it cannot survive solely on the success of one product.

The introduction of limited edition designs -- most of which collaborate with an existing franchise -- captures a larger market by creating a sense of exclusivity and by appealing to the fanbase of these franchises. Having a few variations of a theme will also create a sense of collectability, to influence fans to purchase more than one.

Moleskine has featured cult films on their limited edition notebooks, from Star Wars to Batman to J.R.R Tolkien’s The Hobbit, as well as iconic characters such as Hello Kitty, Charlie Brown and Mickey Mouse, just to name a few.

Consumers love products that are novel, and these special editions no doubt sell like hotcakes, or at the very least are heavily talked about.

Read next: How 6 Companies Effectively Used Exclusivity As A Marketing Tactic

5. Product expansion to keep up with the changing needs of users

Despite its success, Moleskine has been eager to position itself as more than a notebook manufacturer. In 2011, following two years of market research, Moleskine began selling tangentially related products to Moleskine books -- pens and pencils, then later, bags and even tablet cases.

But apparently that was not nearly cutting-edge enough. To keep up with the digital age, Moleskine launched “Timepage,” a new app that syncs calendars from Google, Apple, and Microsoft into one interface, the idea being to make calendaring as easy as flipping through a Moleskine planner.

The brand also launched “Moleskine Smart Notebook” which comprises a companion app that lets you capture what you put on paper, sync it into the Adobe Creative Cloud, and let you open it in Photoshop or Illustrator. The brand has also worked with the digital app Evernote to create smart notebooks that let you capture and access your content in a searchable digital archive.

Moleskine’s foray into digitally enhancing its star product ensures it stays relevant in today’s market, yet at the same time retains the tradition it is best loved for.

Here’s a quick recap on how Moleskine became the world’s favorite notebook via Word-of-Mouth: