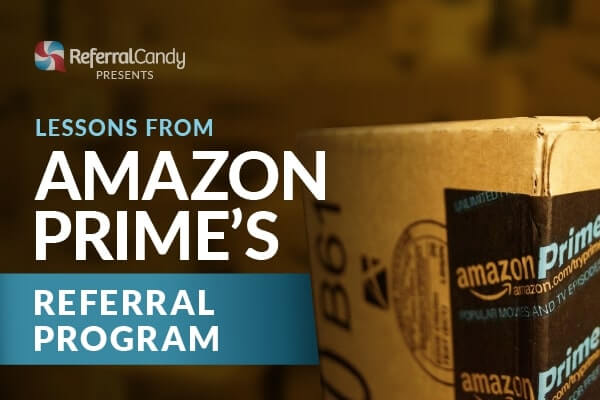 As Amazon is now the world’s largest retailer, it’s far too easy to forget that they weren’t always the king of retail.

In fact, as of fall 2004, Amazon was predominantly still a book and DVD retailer. They had barely scratched the surface of what the company has grown to today.

At the time Amazon was “only” worth $18 billion USD. Fast forward to present day and the company has grown to an inconceivable $1.14 trillion USD in just under 16 years.

So how did the company grow so fast and so quickly?

Well, you can largely credit this to Amazon Prime and the Prime referral program.

But alas the Prime referral program ended in October 2017. Although, that isn’t to say it isn’t still worth our attention.

It helped the company add close to a trillion dollars to its net worth, so it's no doubt still worth analyzing and modelling some of its best strategies.

Let’s start with the two key reasons why the program was so successful:

What does a referral program look like when it's built by market leaders?

At ReferralCandy, my team and I have been studying the data of thousands of referral programs. We pore over the data to figure out what works and what doesn't.

So you can imagine how stoked I was to get the opportunity to study how Amazon, the market leaders in eCommerce, crafted their referral campaign and referral message. (After all, Prime has been cited as a great example of a loyalty program, so the folks over there clearly know what they are doing.)

I signed up for an account and was ready to be blown away.

1: Amazon used an evocative header image to draw you in.

Pictures communicate much more information than words do.

This particular depiction of cheerful, attractive people lets you know how you and your friend(s) will feel when you make the referral.

It's a simple, effective reminder that you have friends that you share experiences with, and it's fun to help.

2: Effective use of social proof entices meant potential customers were happy to give Prime a try.

When you receive an email invitation to try Prime, Amazon makes it a point to emphasize who invited you.

This is a critical part of any referral program, friends I’d send this referral email to might not have heard of Prime before, but seeing my name clearly in the subject and header would help them feel like this might be worth trying.

3: Clear Calls-To-Action on every page encouraged visitors to move quickly to the next step.

All throughout the portal, emails, and landing pages, it was really clear what to do next. Strong calls-to-action remove the guesswork needed to figure out what the next steps are in the referral process. Reduced guesswork means a higher referral conversion rate.

4: Wide reach - Referral program accessible even to Amazon.com users who didn't use Prime

A large base of advocates is a key factor in running a successful referral campaign. Increasing the number of advocates in the campaign maximized the chance that there will be Prime referrals every day. Add that to the huge number of customers with Amazon Prime subscriptions and it's an incredible number of people!

All you needed to make a referral was an Amazon.com account. This gave their program wider reach and maximized their number of advocates.

But... some parts of their program left me going “huh?”

1: The Value Proposition is unclear - who stands to benefit, exactly?

When I signed up and logged into the referral program I was greeted with the header “One more benefit of friendship”. My first thought: 'Sweet! My friend and I get to benefit from our friendship.'

Digging around this site though, it became apparent that my friend wouldn’t actually get a referral discount or anything from being referred. The benefit of the friendship was the $5 credit for me. This caused a little confusion (since I thought friendship meant two-way) and was a bit of a letdown.

You definitely want to be clear and upfront throughout your campaign to reduce friction in the referral process.

2: One-sidedness - No Friend Offer, only the advocate got rewarded!

Following up from the previous point, it actually makes more sense for Amazon Prime to run a double-sided incentive program. This is when both the advocate and friend get incentivized in the referral process.

For stronger, established brands (like Amazon), a double-sided referral incentive works better since as a Prime customer, I’m not very price-sensitive on my next purchase. I’d much rather have part (or all) of my $5 go to my friends so that they would appreciate me.

3: A glaring red $0 is demoralizing for new advocates.

Every time I logged into the referral portal, I’m was hit front and center with the grim fact that I hadn't earned anything. A zero data world is a cold place.

When advocates are starting out, they wouldn’t have any credits yet and could use some motivation. I'd emphasize the steps they should carry out next instead of pointing out, in bold red, that they have $0 to their name.

4: Wasted opportunity to put the advocate's name in the 'from' field

Prime's referral portal lets me send friends a referral email by keying in their email addresses. If that happens to be a friend who hadn’t encountered Amazon Prime prior, she’s was going to see an email from a corporate entity, rather than somebody she knows.

It helps that the subject starts with my name. But making it seem like the email came from me (since I did send it!) would have been even better.

Rundown: It was awesome to see Amazon using a referral marketing campaign to tap into the power of word-of-mouth.

Up till then, the eCommerce giant hadn't been the most social-friendly company (it's ranked only 129th in the Social Media 300). Which is odd since their 35+ million customer reviews are the world’s first large-scale example of 'social commerce'.

Word-of-mouth taps into the fundamental human desire to connect with people and share useful information. We've always believed this is how all information is ought to be discovered. A return to what is hardwired into all of us.

It'll be exciting to see how Amazon's referral campaign and social efforts evolve with time. Jeff Bezos has built the Amazon empire around the central question "What's not going to change in the next 10 years?". People have always had a deep-rooted need to discover and buy, not in isolation, but together.

Bonus: Get Our Referral Marketing Checklist! We've put together an exhaustive referral marketing checklist to help you make sure you know cover all the bases when setting up your referral program. Check it out here.