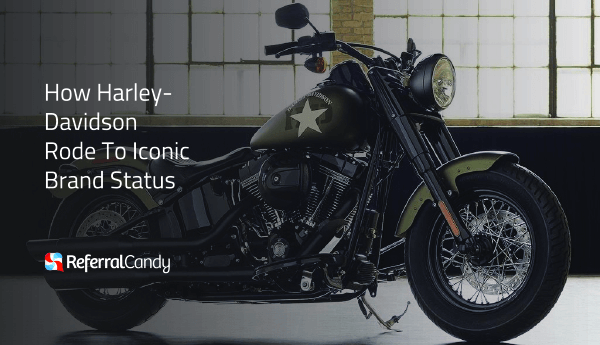 Love them or hate them, Harley Davidson is one of the most evocative brands in the world.

"The only motorcycle manufacturer
That makes big, loud motorcycles
For macho guys (and "macho wannabes")
Mostly in the United States
Who want to join a gang of cowboys
In an era of decreasing personal freedom."

The legendary motorcycle company was founded in Milwaukee, Wisconsin in 1903 by childhood friends William Harley and Arthur Davidson.

While sometimes mocked as overpriced, overrated, and as the vehicle-of-choice for bullies and and macho-wannabes, Harley-Davidson has nevertheless, remained utterly iconic throughout the years. The brand inspires as much loyalty as it does derision.

And it's easy to see why. A Harley-Davidson motorcycle is a technological throwback amidst a modern sea of minimalism. It's unapologetically muscular and obnoxiously loud. Most impressively, the automaker has remained relevant through the decades – acquiring an eclectic bunch of fans and riders, ranging from soccer moms to post-ironic hipsters.

It's quite probable that no other brand in existence gets nearly as much volume in tattoos:

How did Harley-Davidson achieve such phenomenal success and visibility as a brand? What sort of marketing strategy did they use? Let's take a look.

1: "Rebel By Choice" – Clear brand positioning by bikers, for bikers

"When someone owns a Harley they realize that they are born into a community of equals where it doesn’t matter the status, job, income, power of the motorcycle rider next to them, it gives them permission to focus on a common goal of community and a common passion of riding motorcycles." – Jonathan Cooper, Research Now

Harley Davidson knows exactly what it is, and how it's viewed through the public's eyes, particularly its enthusiasts. The motorcycle manufacturer has wholly embraced its identity as the vehicular embodiment of 'freedom', 'individualism', 'rebellion', and the 'American way'.

"It's not hardware," Richard F. Teerlink, Harley's chairman said in an interview, "it is a lifestyle, an emotional attachment [and] that's what we have to keep marketing to".

This self-awareness of its transcendent image has led Harley-Davidson to pursue unorthodox marketing tactics that simultaneously pasteurizes its 'outlaw' status, while reinforcing it through greater inclusion.

For example, membership in Harley-Davidson is now open to pretty much everyone, including kids, and adults who don't have driver's licenses. At the same time, Harley continues to reward its hard-core customer base by sponsoring motorcycle rallies around the world.

2. Build a loyal following and allow them to take ownership: The Harley Owner's Group (H.O.G.)

In 1983, Harley-Davidson created the Harley Owners Group (H.O.G.). This club would allow Harley to connect itself with both its customers and the mainstream population. When conceived, H.O.G was criticized by hard-core Harley bikers for stealing and softening the company's recalcitrant character. That however, didn't deter Harley's marketing ambitions.

More importantly, the club became Harley's primary vehicle to overturn its past association with motorcycle gangs. As such, Cylde Fessler, Harley's vice president for business development, utilized H.O.G. for philanthropic purposes, associating the club with the Muscular Dystrophy Foundation and other charity groups.

Suffice to say, H.O.G. has been a resounding marketing success. Today, it has more than a million members in 25 countries, and half of them regularly attend Harley-Davidson events.

Furthermore, H.O.G. members are encouraged to provide direct input into how Harley's creates new products and improves current ones.

Best of all, because of H.O.G. and its push for greater customer engagement and ownership, Harley-Davidson spends less than a million dollars on advertising each year.

In 1969, the cult movie Easy Rider reinvigorated Harley-Davidson. The film had a profound effect on Harley-Davidson and the global motorcycling scene. Bikers immediately began to customize their bikes to mimic those featured in Easy Rider.

Harley-Davidson profitably capitalized on this, introducing similar-looking motorcycles to the market.

Most famously, the Harley-Davidson motorbike (aka 'Captain America' bike) ridden by Peter Fonda's character in Easy Rider became a motorcycling phenomenon. According to the Telegraph, the bike symbolized the global resurgence in counterculture and anti-war sentiments in the 1970s and 1980s.

Perhaps, the most well-known of these events is the annual Sturgis Motorcycle Rally in Sturgis, South Dakota.

Initially, Harley had no connections with the rally, which began back in 1936 by the Jack Pine Gypsises Motorcycle Club. However, in 1980, Harley released the FXB Sturgis model to celebrate the event.

Similarly, Harley has been one of main sponsors of Sturgis, so much so that the event is described as the "epicenter of the Harley-Davidson mystique".

At Sturgis, Harley effectively socializes with its customers and fans, both old and new. Rally visitors are able to test-ride Harley bikes and purchase a plethora of Harley merchandise. Harley bike owners also proudly show off their motorcycles.

As a result, Harley strengthens its relationship with its fanbase, treating them as family and as equal participants in the production and promotion of the brand.

5. Marketing to the Military

Despite its renegade image, Harley-Davidson has strong connections with the US military. In WW1, Harley sold 15,000 motorcycles to the US military, and almost all of its output during WW2 was for the military as well.

By showing its appreciation for the US Military, a hallowed American institution, Harley-Davidson cements its quintessential American character while winning the hearts of military veterans, their families, and their supporters.

6. Extension of brand into clothing

You don't just ride a Harley-Davidson motorcycle. You need to dress the part as well. In this department, Harley does an amazing job in creating and selling clothes that embody its brand.

While Harley clothes represent a small amount of its total revenue, they nevertheless promote the Harley-Davidson lifestyle, turning its wearers into brand advocates.

This means that regardless if you own a Harley bike or not, you'll be able to wear Harley's colors. And fashion, unlike motorcycles, is open to everyone.