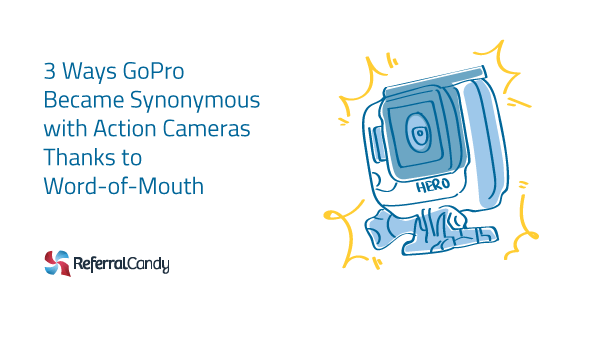 Today, GoPro is synonymous with "action cameras", which is an amazing feat, seeing that founder Nick Woodman bootstrapped the company for 10 years in 2001.

When you see a first-person-view footage of a skydiver, surfer, or skateboarder, the video was probably filmed with a GoPro camera.

GoPro's first commercial cameras were designed to allow extreme sports athletes to capture their stunts and experience on their own, without a photographer or an elaborate setup.

A decade later, GoPro cameras are being by avid extreme sports enthusiasts to anyone who wants to capture precious moments, like cooking.

So how did GoPro become so popular in less than two decades?

1. GoPro wants customers to become heroes of their own adventures, which is both inspiring and memorable.

When founder Nick Woodman was asked about the origin of GoPro's name and their "Be a HERO" slogan, he said,

GoPro was a great name in that it meant "attack it full on" no matter what your passion or interest is...get after it and live life to the fullest. 'Be a HERO' came out of the name of our first product, the HERO Camera.

The idea was that our camera could help you capture photos (and eventually video) that made you look like a HERO.

Be a HERO similarly inspires you to do your best at what ever you do. For example...being a HERO as a dad means dragging myself out of bed too early every morning to play "the wall game" beanbag battle with my kids.

Just like Under Armour's persona of being an utter badass, GoPro's association with being a hero encourages customers to get behind their brand, so they too can become heroes of their own lives.

Word-of-Mouth Pro Tip: Identify the values that your target customers aspire towards. It can be about overcoming obstacles with sheer willpower (like Under Armour), or aspiring to be the best at whatever you do. Make your brand embody those values, to serve as a banner to rally your customers and fans with.

2. GoPro constantly features interesting and exciting user-generated content from novel perspectives, so their 3.2 million YouTube subscribers will always come back for more.

In this video promoting the GoPro HERO4, you see tons of epic footage of concerts, volcanoes, whales, and icebergs.

Many of us have never tried surfing, might never try skydiving, and perhaps won't visit an active volcano any time soon.

GoPro features exciting footages uploaded by their users on their YouTube account, allowing us to experience these amazing events for ourselves.

So far, their 3.5 thousand videos have garnered almost a billion views.

Photo of the Day! Cosmonaut @olegmks on his way home from the @iss #GoPro #GoProSpace

Having a wealth of free content generated by users also means that GoPro doesn't have to rely on traditional advertising. From 2010 - 2011, GoPro was able to double its profits to $24.6 million by only spending $65k on marketing.

P.S. Speaking of novel perspectives, a project on Indiegogo called "Hardcore" is a science-fiction action movie told entirely from the main character's point-of-view. The creators have used a special GoPro rig to tell the story through the eyes of a Jason Bourne-like character.

Word-of-Mouth Pro Tip: Find ways to excite your customers and give them a reason to share and come back for more. Your product might not give you access to as much user-generated-content as GoPro, but it should still be a valuable part of your marketing strategy. People tend to trust UGC more than traditional marketing, and it's a good way to engage your customers.

3. GoPro cameras allow individuals to show off their unique skills, making it in their self-interests to share their videos.

When it comes to activities like surfing or skydiving, it is impossible to share the experience with someone else without a GoPro camera.

Before these action cameras, you either had to invite your friends to see you perform in person, or have someone take videos of you from the sidelines.

Now, daredevils are able to capture moments of themselves doing awesome things and share it with their friends.

When you see a surfer like Koa Smith attempt a 27-second skeleton barrel, you realize how awesome he is, but at the same time, how a GoPro allowed you to experience it from the comfort of your couch.

Recap on word-of-mouth lessons from GoPro:

For more tips on how to craft a super-strong brand image, check out our post on sports apparel brand Under Armour.