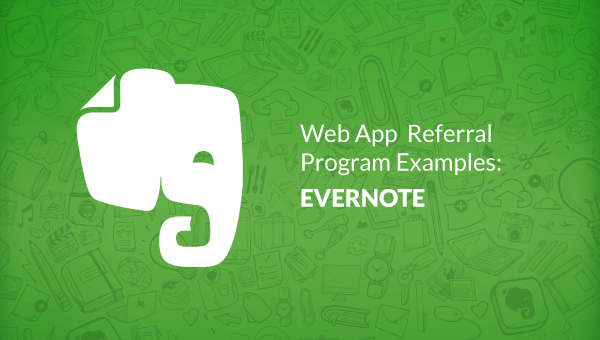 Launched publicly in 2008, Evernote is a digital note-taking app that allows you to sync your notes across multiple devices, add photos, voice, and text instantaneously.

It even allows you to present your notes as slideshows.

Evernote is, essentially, a cloud notebook on steroids.

To put that into perspective, Twitter took nearly 24 months, Tumblr got 1 million blogs in 27 months, and Facebook hit their first million in 10 months.

Also, while all three examples mentioned were social platforms– designed for the purpose of helping people share information with one another– Evernote is primarily a personal note-taking app.

As Evernote's CEO Phil Libin said in a Forbes interview,

"Evernote is anti-social. It was created for you, not your friends."

That, combined with a significant portion of their users entering through word-of-mouth channels suggests that people are sharing it because they find it useful.

Notably, up to 25% of Evernote users who use the service for 3 years upgrade to Premium.

Evernote offers 3 tiers of its app: Free, Premium, and Business.

Compared to Evernote Premium, Evernote Free has an upload-size cap and comes with fewer functions, but is powerful enough for most casual users.

Evernote has realized that the longer their customers use their app, the more valuable it becomes.

So Evernote can reasonably assume this: As long as they can be useful to users for 35 months, they can count on up to 25% of them turning into paid users.

1. Evernote's referral program is based on a Points system that allows users to unlock all kinds of goodies

This is a very significant decision with strong referral incentives and distinguishes Evernote from many other web apps.

Contrast this with other successful referral program examples:

Lesson: Every business needs to figure out precisely why their customers use their service. What do they want? How does the service help them?

Only when you understand that will you be able to pick the right referral rewards for your business.

So, why a points system for Evernote's referral program?

There are two points very important to grasp with regards to Evernote's business:

Giving away cash would definitely net them loads of users, but it might be unnecessarily costly and attract opportunists. (PayPal only got away with it because they were a payments platform, and regular eCommerce companies achieve success by tying the cash rewards to the referred purchase.)

So if Evernote really wanted to give out cash, they could've done that whenever users only successfully referred others to pay for the premium service.

But that doesn't quite fit into the natural Evernote user behavior– people tend to use the free app as long as it served their needs, and upgrade only when they need to– not because somebody sent them cash or discounts!

So Evernote does something pretty clever with its referral program: it gives users a chance to experience Evernote Premium for free whenever making referrals. If they like it, they'll feel compelled to stick with it– especially if they've already uploaded large files in the interim.

Besides the functional "try-before-your-buy" benefit, there's also a nice "status" effect. Which is kind of like Reddit Gold, or special in-game Mounts for World of Warcraft players who refer their friends?

Though how you refer people and your referral page template is extremely important the case of Evernote shows that referral marketing programs and getting your referral messaging right are also a must.

Hey! Wanna see how to gain your first customers fast just like Evernote?

Of course, you do.

Check out our list of How 22 Successful Companies Fought For Their First Customers here.