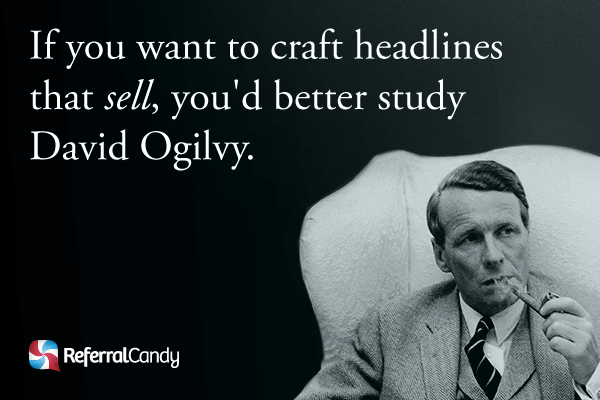 What was the best headline ever written?

In 1963, advertising genius David Ogilvy published 'Confessions Of An Advertising Man'. It's a thin book at about 140 pages– really a collection of 9 essays. Every sentence sparkles with wit and intelligence, even today.

"On the average, five times as many people read the headline as read the body copy. When you have written your headline, you have spent eighty cents out of your dollar."

Given the importance of the headline, you'd think that we'd see all of Ogilvy's best headlines in one place! Strangely, I've never seen that myself (apart from in the book, spread out over many pages), so here they are:

1: Ogilvy's personal favorite: "At 60 miles an hour the loudest noise in the New Rolls-Royce comes from the electric clock"

In "How To Write Potent Copy", David Ogilvy describes the above ad as possessing "the best headline I ever wrote." He also describes later how Shell only included Ogilvy's agency on the list of agencies that they were considering because they were impressed by the advertising Ogilvy did for Rolls-Royce.

In my Rolls-Royce advertisements I gave nothing but facts. No adjectives, no 'gracious living.'

Fun fact: In a footnote, Mr. Ogilvy describes how the chief engineer at the Rolls-Royce factory shook his head sadly and said, "It is time we did something about that damned clock."

2: "It's a mutiny to mix a Gin-and-Tonic without Schweppes!"

The version of the ad in the copy of my book says "Schweppes discovers America - and vice versa!". Yet the more popular image seems to be "It's a mutiny to mix a gin-and-tonic without Schweppes!". This follows Ogilvy's own principles- the latter is a superior headline because it mentions the gin-and-tonic, which singles out the prospect. "Do you drink gin-and-tonic? Then you need to know about Schweppes."

The man in the picture is Commander Edward Whitehead, an actual executive of Schweppes who came to the U.S. to oversee American distribution of Schweppes tonic water. The ads emphasized that Whitehead was a real commander in the Royal Navy during World War II.

"In my first advertisement for Puerto Rico's Operation Bootstrap, I used 961 words, and persuaded Beardsley Ruml to sign them. Fourteen thousand readers clipped the coupon from this advertisement, and scores of them later established factories in Puerto Rico. The greatest professional satisfaction I have yet had is to see the prosperity in Puerto Rican communities which had lived on the edge of starvation for four hundred years before I wrote my advertisement. If I had confined myself to a few vacuous generalities, nothing would've happened."

Meanwhile, all copywriters should read Dr. Rudolph Flesch's Art of Plain Talk. It will persuade them to use short words, short sentences, short paragraphs and highly personal copy."

5: 'Reward your top executives with a sabbatical year in Britain – on half pay'

"When we took over the "Come to Britain" advertising we substituted photographs for the drawings which the previous agency had been using. Readership tripled, and in the subsequent ten years U.S. tourist expenditures in Britain have tripled."

OGILVY: "Research had revealed that our greatest single obstacle lay in the fact that Europeans had an exaggerated concept of the cost of visiting the U.S.A. We decided to attack the problem head-on. Instead of saying in a bland, innocuous way that you can tour America "for less than you suppose," we gave a specific figure- 35 pounds a week. This was arrived at after careful verification. For example, before deciding on a reasonable minimum price for a hotel room in New York, we sent one of our copywriters to check the beds at the Hotel Winslow, which charges six dollars a night; she found them satisfactory.

Our advertisements achieved record-breaking readership when they appeared in European newspapers, and they produced so many inquiries that the London, Paris and Frankfurt offices of the U. S. Travel Service had to work far into the night.

Our campaign triggered an avalanche of editorial publicity which was probably without precedent in the history of advertising. The Daily Mail sent its star feature writer to the United States. In his first dispatch he cabled: 'At the same time as Pressident Kennedy invited me–and all the other millions of Europe–to try the novelty of of tourism in the U.S., he issued a secret directive to 180,000,000 Americans to be nice to us. How else to explain the embarrassing generosity, the overwhelming kindness, the extreme courtesy at every turn?'

The proof of the pudding is in the eating. Eight months after our campaign started, French tourist traffic to the United States was up 27 per cent, British traffic was up 24 per cent, and German traffic was up 18 per cent."

There are several variations of this ad. One includes a pilot disembarking from a plane, talking about how advanced jet fuel technology goes into Shell. Another focuses on how Super Shell's 9 Ingredients boost performance, this one focuses on damage-avoidance. Ogilvy clearly practiced the experimentation and testing that he preached.

Incidentally, Shell was one of the 5 'blue-chip' clients Ogilvy wanted most- he made a list the day after setting up his firm. In "How To Get Clients", he describes them as the bigggest account he had ever gotten.

8: 'The man in the Hathaway shirt'

OGILVY: "What do work are photographs which arouse the reader's curiosity. He glances at the photograph and says to himself, "What goes on here?" Then he reads your copy to find out. This is the trap to set.

Harold Rudolph called this magic element "story appeal,"and demonstrated that the more of it you inject into your photographs, the more people will look at your advertisements. [...]

Knowing from Rudolph that a strong dose of "story appeal" would make readers stop and take notice, I concocted eighteen different ways to inject this magic ingredient. The eighteenth was the eye patch. At first we rejected it in favor of a more obvious idea, but on the way to the studio I ducked into a drugstore and bought an eye patch for $1.50. Exactly why it turned out to be so successful, I shall never know. It put Hathaway on the map after 116 years of relative obscurity. Seldom, if ever, has a national brand been created so fast, or at such low cost. Articles were written about it in newspapers and magazines all over the world. Scores of other manufacturers stole it for their own advertising–I have seen five copies from Denmark alone. What struck me as a moderate good idea for a wet Tuesday morning made me famous. I could have wished for fame to come for a more serious achievement."

Everyone should read "Confessions Of An Advertising Man" by David Ogilvy.

I love books, and I love reading the thoughts of intelligent, driven people– and I wish I had encountered this gem years ago. I have yet to encounter a review or a blogpost that fully does justice to David Ogilvy's mind. I highly, highly recommend it.

It's not just for copywriters- there's great management and general life advice in there, too, and it's impossible to reduce his insights and perspectives into a few bullet points. It's his approach and style that's hardest and yet most satisfying to make sense of.

Read next: The 10 Best Marketing Slogans... Ever!