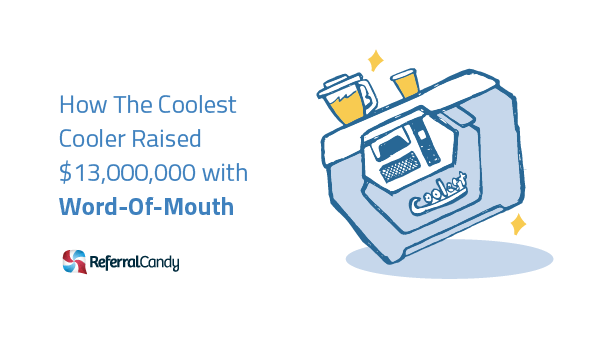 Save for the rare campaign or two run by large corporations, every campaign on Kickstarter relies almost entirely on word-of-mouth.

Word-of-mouth has turned many impressive ideas into products that now sit in the hands of happy backers worldwide.

Amongst the kings of Kickstarter are two revolutionary smart watches, a card game designed by internet celebrities, a literacy program for children across America and… an ice box?

Granted, the Coolest Cooler is no ordinary ice box, it’s a tricked out cooler worthy enough to sit in the trunk of James Bond’s Aston Martin. Still, amongst pinnacles of tech and culture… it’s an ice box.

Today, we decipher the word-of-mouth marketing strategy that gave rise to the unlikely legend that is the Coolest Cooler.

1. The Coolest Cooler Is A Cool Story

Skymall is a collection of questionably useful novelty items to satisfy buyers impulse 30,000 feet in the air.

Kickstarter is basically the Skymall of the internet.

People tend to tell friends and family about the cool stuff they see on Skymall more than they actually make purchases. I know this is true. My father has sent me hundreds of photos from Skymall catalogues with variations of the caption “look at this silly thing!”.

In turn I tend to mention these products when making small talk - “Did you know you can buy a folding chair that’s 3 meters high?”

Similarly, "Did you know there's a cooler with a built in blender, chopping board, usb charger, bluetooth speakers and more gadgets than I can remember on Kickstarter?" makes for excellent small talk.

The mere existence of the Coolest Cooler, like much of the Skymall catalogue, is an interesting bite sized story to tell. Its many features pack a wow-factor and its novel nature is intriguing.

It’s a story that can be used to fill awkward silences or start conversations, in other words, perfect word-of-mouth material.

2. The Coolest Cooler Was Released When The Season Was Right

Rarely does a non-fashion product get to leverage nature’s cycle to its advantage… but the Coolest Cooler grabbed summer by the neck and channeled her sunny powers.

When the Coolest Cooler first launched on Kickstarter in November 2013, it failed to meet its $150,000 goal and faded into obscurity.

Grepper decided to tweak the product and launch it again in the height of summer, when Americans were gearing up for independence day grill parties and Britons were baking under record summer temperatures. That campaign went so well we’re sitting here a year later analyzing it.

People buy products as solutions to their problems. The unbearable weather allowed people to clearly visualize how the Coolest Cooler could fit into their lives.

It’s worth noting that backers didn’t care that the product would only arrive when summer was long over. The lesson here is that to leverage the environment to generate word-of-mouth, your product need not be immediately relevant - it just needs to make your audience envision your product in their lives or the lives of their friends

3. The Coolest Cooler's Creator Was Highly Qualified (And 100% Serious)

Even amongst the craziness of Kickstarter, the Coolest Cooler is pretty absurd. But unlike the notorious “Potato Salad” campaign or the dozens of “joke” campaigns on the site the creator was serious and completely professional.

Ryan Grepper isn’t the kooky inventor popular fiction has primed us to expect, he’s a serial inventor with a real passion for the Coolest Cooler. He’d torn through failures and roadblocks before he got to where he was. The result is a high tech cooler that’s well-designed and intentional and a campaign that’s genuine and heartfelt.

It’s one thing to throw a couple dollars into a joke project for the sake of giggles and participation. That certainly worked for Potato Salad.

A project that appears a little odd at first but has real depth, substance and an underdog story woven into it however, is incredibly charming.

The numerous challenges Grepper faced leading up to the Coolest Cooler made him a media darling. His expertise was the icing on the cake. This is enough to make even the most dismissive, skeptical crowd reexamine their thoughts on the project.

With a premise that’s easy to weave into daily conversation and an engaging backstory and discussion that comes after, the Coolest Cooler could easily form an entire conversation.

4. The Coolest Cooler Was The Right Mix Of Surprising And Amazing

Expectations of Kickstarter products change as they reach different stages of funding.

The oddity of the Coolest Cooler makes it more at home in Kickstarter’s scrapheap of failed campaigns. In fact that’s exactly where its previous iteration sits.

Where you’d imagine it doesn’t belong is amongst the kings of Kickstarter… but the Coolest Cooler campaign’s funding spiked and was plastered on news sites when it broke into the “Most Funded” page on Kickstarter! Here’s why:

Imagine walking into a Starbucks and seeing a lawnmower on sale. Regardless of your level of interest in lawnmowers, you’d give it a second glance - lawnmowers don’t belong in Starbucks.

The campaign became news because it didn’t fit with the public’s perception of what a highly funded Kickstarter project should look like. That unexpectedness paired with the staggering amount of money pledged is word-of-mouth fuel - it's shock and awe.

The Coolest Cooler is to Kickstarter what Eminem is to rap music - brazen and unexpected but amazing.

Here's a quick summary of the word-of-mouth lessons from the icy cold mystery that is the Coolest Cooler:

And finally, here are some questions to mull over: