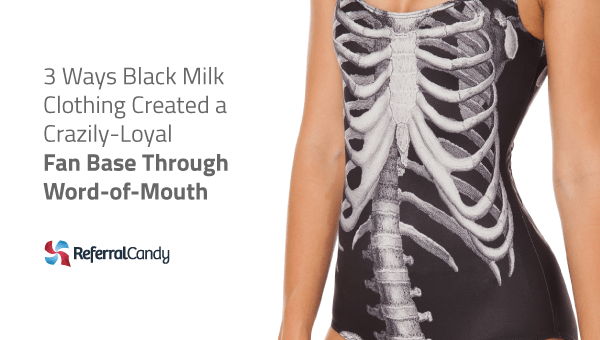 When we think about fans of comics, movies, or celebrities, the really loyal ones are those that give themselves names.

For instance, fans of Lord of the Rings are called Ringers, and Star Trek fans call themselves Trekkies.

As it turns out, fans of Australian leggings and apparel company Black Milk have a name too; they call themselves Sharkies.

What a great marketing strategy, leveraging the love of other brands to benefit your own. Not a bad way to not only secure your first customers but also entice them to come back again and again.

Back in 2009, James Lillis made his clothes from his kitchen, with a sewing machine he got from selling his CD player.

Fast forward five years and Black Milk Clothing is now a multi-million dollar company, with factories churning out 2000 pairs of tights every day to keep up with orders all over the world.

Their new products sometimes get sold out in a matter of seconds.

How did Black Milk grew to such a scale, where they're now revered like a cult?

1. Black Milk gives fans something to brag about by featuring their Instagram photos on official product pages.

How would you feel if photos of you wearing your favorite dress were featured on the company's official product page?

At Black Milk, every product comes with a unique hashtag, where customers can tag photos of themselves wearing that product on Facebook and Instagram.

These tagged photos will then appear on the official Black Milk product pages, giving fans some serious social currency:

Word-of-mouth pro tip: Reward customers who actively promote and share your products, so they feel appreciated and are encouraged to keep it up.

2. Black Milk encourages fans to manage localized fan pages on Facebook, so they can meet up to trade leggings or just hang out with like-minded people.

Black Milk is famous for its social media engagement, and its Facebook page is where most of the magic happens. New products are announced, queries are answered, and competitions are usually held there.

But Black Milk doesn't just have one Facebook page dedicated to them. There are different types of pages, all created and managed by Sharkies all over the world.

There's the Black Milk Clothing Swap, Sell, and Buy group, where fellow Sharkies can buy, exchange and sell products to each other without going through the company.

There are also smaller Black Milk fan pages created for localized communities, where Sharkies can meet up with fellow fans from the same state. These groups come from all over the world, from within Australia itself to the Philippines and Colorado, USA.

Word-of-mouth pro tip: Entrusting power to your customers gets them more involved with your brand, and shows that you trust and respect them enough to represent your brand.

3. Black Milk wins over comic and movie fans with licensed products of their favorite fictional characters, making them come back for more.

As a comic, movie, or novel fan, expressing your fandom might restrict you from wearing rather unstylish hoodies, caps, or tees.

But Black Milk has managed to change all that; producing dresses, swimsuits, and leggings that feature popular comics, movies and novel franchises.

Some of these include DC Comics, Disney, the Game of Thrones, and Star Wars:

With kick-ass apparel like that, it's no wonder fangirls are going crazy over Black Milk.

Accordingly, when sales for swimsuits featuring the iconic robots from Star Wars stopped, they eventually appeared on eBay, going for about $600 each.

Obtaining official licenses for popular franchises not only allows Black Milk to cater to the hardcore fans, but also coincide with time-sensitive movie releases.

For instance, those who enjoyed movies for the Hobbit franchise might choose to buy the dress with the map of Middle Earth on it.

Word-of-mouth pro tip: When you consider your target customer base, it is important to find out what else they might be crazy about. See if you can incorporate their peripheral interests into your products, so you can attract more customers.

In an interview with Black Milk's marketing and operations manager, Cameron Parker, he explained that:

...through word of mouth and the simple fact that no-one else is really selling crazy print leggings, we managed to find success. We have a $0 marketing budget so word of mouth is really important – it’s all about girls walking down the street and people coming up to them to say “oh my god, I want those tights, they’re so cool, where did you get them from?”

Looking at Black Milk's story, we can see that customers don't want a company that talks down to them and treats them like customers.

They want a company that respects them, gives them autonomy and celebrates them for liking their stuff.