7 Examples of the Authority Principle Used In Marketing 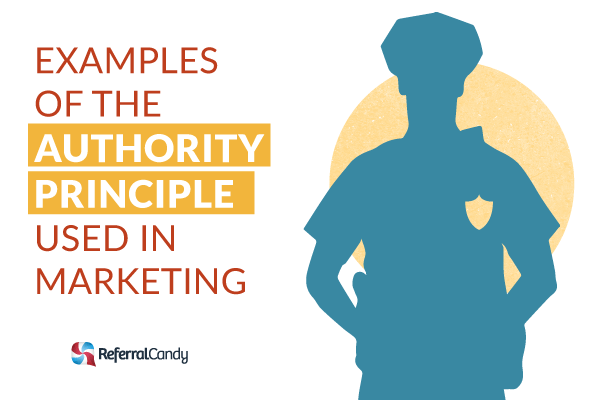 Today, we'll be covering Dr. Cialdini's 5th principle of persuasion: Authority. In his book Influence, he covers these three factors that trigger the authority principle:

He mentions that these factors can reliably trigger our compliance in the absence of the genuine substance of authority.

Here's how the Authority principle might be applied to eCommerce marketing and brands that are nailing it:

A. Titles - Positions of power/experience

When we are in a field that we’re not really good at, we are willing to listen to someone who does.

We can't possibly cross-reference and confirm that the people we meet are as credible as they claim to be, so we have learned to rely instead on quicker and more superficial cues, such as job titles.

In a business or eCommerce context, however, it seems that experience and popularity count for more. Titles like 'Founder', 'CEO', or 'Director' are probably more persuasive than a Ph.D. - assuming a certain baseline number of followers.

Academic titles like Ph.D., Professor, etc. helps in certain fields that require extensive knowledge, such as medical doctors and scientists.

The expert behind these principles of persuasion, Dr. Robert Cialdini, is a fine example.

Those who read about him for the first time would instantly perceive him as someone with extensive academic knowledge and credibility in psychology, even without knowing what he wrote about.

PayPal Mafia refers to the group of PayPal team members who left when PayPal was sold to eBay in 2002. Some of them went on to start other companies, such as Yelp, Tesla, LinkedIn, Palantir, YouTube, some of which are now worth billions of dollars.

When introducing new startups or individuals in the media, any association with successful companies is often mentioned (e.g. “Quora was co-founded by two former Facebook employees, Adam D'Angelo and Charlie Cheever”).

When we read something like that, we instantly establish a sort of respect for this individual/startup.

Read next: The Original #GrowthHackers: How PayPal Achieved 7-10% Daily Growth In The Early 2000s

When your customers need help, they want to talk to someone who is friendly, but more importantly, competent enough to solve their problems.

You might not be able to establish the credentials your customer support staff possess, but you can give them empowering job titles.

This might reduce some of your customers’ anxiety, and enable them to entrust your staff to get the job done.

Apple’s Geniuses are tech support staff that handle software and hardware repairs. While I doubt all the staff are certified geniuses in a psychological sense, they are definitely vigorously-trained by Apple.

And they’d better be; because you wouldn’t want to trust your expensive iMac to someone you didn’t think was an expert.

Just like the Geniuses over at Apple, Shopify Experts are there to help solve their users’ problems.

Shopify has different Experts for different fields, so customers get the impression that they are not just knowledgeable, but also very specialized.

In a post on the principle of Authority, Dean Rieck describes a reporter who managed to trick people into giving him their money and personal details at a bank. He disguised himself as a guard, and placed a notice stating that the ATM was out of order, and to hand deposits over to the guard on duty.

Psychological research has shown that people take the only 1/10th of a second (0.1s) to form first impressions about someone. Another study found that web users take half that time (0.05s) to evaluate a website.

So how do you communicate authority as effectively as a guard’s uniform in such a short time?

B1. Look professional and relevant to the industry

As one of the findings in the Stanford Web Credibility Project states:

We find that people quickly evaluate a site by visual design alone. When designing your site, pay attention to layout, typography, images, consistency issues, and more. The visual design should match the site’s purpose.

The study also found that people had more on visual appeal when assessing website credibility for certain categories of sites; one of which was eCommerce sites.

Finch Goods does this well. Their landing page looks polished and gentlemanly, which appeals to their target customer demographic.

Close-up shots from different angles help to showcase the material and workmanship of these wallets.

A feature-rich product like the Pebble Steel would benefit from having a scrolling page that highlights the fancy features.

It all depends on the kind of information your customers need, and what features you’d like them to see. But easy navigation, nice pictures, and readable fonts are the basics.

Studies have shown that having a photo on your site improves the feeling of trustworthiness in site visitors.

In order for visitors to perceive the site as being more authoritative, it might be useful to have photos of the founder/CEO, and perhaps the main team behind your brand.

They want to know that you are proud of who you are, and they are welcome to look you up on various social media platforms to learn more about you.

Read next: 6 Tips To Acquire Customers With Your About Page [Infographic]

This example of Neil Patel probably nails the Authority principle.

His title as co-founder of popular companies like Crazy Egg and Neil Patel is mentioned.

Featured in the Wall Street Journal and Entrepreneur Magazine? Check.

Recognized by President Obama and the United Nations? Check.

Neil Patel was even awarded Congressional Recognition from the United States House of Representatives.

Now that’s a lot of authority.

Trappings are accessories that help to inform others of a certain role. A police badge and gun are the trappings of a police officer, while an expensive car is possible trappings of a successful businessman.

Ecommerce trappings are slightly different. The only information people can get about how successful/authoritative your brand is online, through:

In this respect, eCommerce trappings overlap quite a lot with social proof.

Demonstrate that you’re great at what you do, and people will show you due respect.

The Authority principle is a powerful tool to use in building your brand image, but there are a couple of caveats you need to be mindful of: