8 Examples Of How Apple Generates Word-Of-Mouth 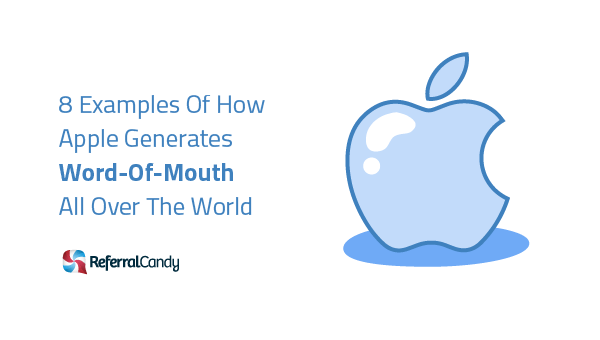 Everyone’s talking about Apple. News channels fight to be the first to report any news at all about the latest iDevice.

Everywhere, people are verbally sparring in the war between the iPhone and every other phone out there.

In cafes and coffeeshops around the world, fervent Mac users shoot judgemental stares and blast tweets about that one guy in the cafe using a Windows machine.

This morning, I just tried to convert a friend to the Mac. Yesterday someone tried convincing me to get an Apple Watch.

Why do people talk about Apple so much?

Here are 8 examples of how the tech giant has gotten people talking about their brand accompanied by explanations and analyses.

1. By Proving iPhone Photos Are Good Enough For Billboards

Apple has been running noncommissioned, found photos shot by iPhone 6 users as its latest advertising effort.

Sourced from 77 photographers across 24 countries, the campaign is a testament to the capabilities of the iPhone 6’s camera - if it’s good enough to blow up on billboards, it’s definitely good enough for you. (See: The Sinatra Effect)

By showcasing the capabilities of the iPhone’s camera, Apple has made it simple to bring up the product whenever there’s a photo that needs to be taken, which, given the tendencies of our generation, would happen very often.

“This sunset is beautiful, hang on I gotta snap a picture.”

“Put your phone away Clara, use my iPhone, haven’t you seen how incredible the camera is?"

2. By Making You Think About The iPod All The Time

The ads featured music from prominent musicians like U2, Gorillaz and Coldplay and were blasted across multiple platforms including TV, print and posters.

It grabbed the attention of eyes and ears with bold visuals and catchy music and did so constantly by being around every corner. The ads stayed fresh in consumers minds, and thus conversations, all the time.

“Man those iPod ads are everywhere.”

“They look pretty cool, think I should get one?”

3. By Making You Want A Mac To Be Your Friend

The campaigns featured skits starring personified versions of a Mac and a PC interacting in front of a plain white background, each beginning with the lines "I'm A Mac" "and I'm a PC".

Much of the campaign revolved around the clumsy, overly-polite, work obsessed and formally dressed PC running into problems. A laid back and casually dressed Mac would then chime in with an elegant solution to the problem.

The central message was this:

PCs are unstable; frustrating; malware-laden machines for the uncool. Macs, on the other hand, are stable, safe, designed to fit your lifestyle while being just as good at handling the “serious stuff” as a PC...

So get a Mac and all your computer problems will go away.

The campaign was a hit, spawning localized versions the world over and led to an immediate 39% spike in Macintosh sales.

Like most Apple commercials, the ad backed away from the standard tech commercial template of endless product specifications and features. It focused on entertaining viewers and delivering chuckles. Good emotions get people talking.

The personified stories of Mac and PC gave viewers an image they could relate their own daily computer struggles/victories to. As people shared their problems (they always do!), the solution of getting a Mac could be organically slipped into a conversation.

Another interesting result of the ad was Mac users adopting "I'm A Mac" to indicate their preference in computers. By creating a piece of popular lingo, Apple ensured their ads would be talked about.

“I was almost done with my spreadsheet when my entire computer just froze!”

“Haha Shantay you sound JUST like PC from that Mac ad!”

4. By Filming A 60 Second Cinematic Masterpiece (That Was Actually A Commercial)

“1984” was a cinematic ad that portrayed a dystopian future where computers rule over the populace directed by legendary sci-fi director Ridley Scott (Blade Runner, Alien).

Accompanied by a solemn narration, Apple, represented by an athletic lady with a sledgehammer, dramatically runs through rows of people hypnotized by a video of an evil overlord figure and smashes the screen.

Art director Brent Thomas explained the intent of the ad - “to stop America in its tracks, to make people think about computers, to make them think about Macintosh.”

Audiences were so amazed by the ad that it was broadcast on several news channels after the Super Bowl.

$3.5 million of Macintoshes were sold in the weeks following the ad’s screening.

The ad had a cinematic quality quite unlike any other ad at that time. This blew audiences away - no one expected such quality from a commercial.

Beyond shock and awe, “1984” addressed the great worry of the 1980s. As technology grew more pervasive in their everyday lives, people were worried about society becoming slaves to their computers.

Fear not, here’s your beacon of hope, it’s called the Macintosh.

"Did you see the Apple advertisement last night? I can't believe that was a commercial!".

5. By Making Celebrities Appear Incredibly Normal – Just Like You!

To show off the capabilities about the iPhone’s voice activated virtual assistant, Apple hired popular celebrities Samuel L Jackson and Zooey Deschanel to star in a series of videos.

The videos were simple and showed Jackson and Deschanel going about a relatively normal day, utilizing Siri to make their chores easier.

The ads relied on star power. If Jackson and Deschanel were replaced with ordinary people the ad would have been a phenomenal flop.

Showing the normalcy of celebrity life made it easy for viewers to relate to the stars and feel significant. When people have good emotions, they share.

Apple has a consistent track record of incredible customer service.

A quick Google search brings up quite literally hundreds of customer service stories from happy customers from no question asked 1-1 replacements to out of warranty repairs.

Here’s my favorite story, previously featured in our previous post about generating word-of-mouth through delighting customers:

A man dropped his brand new Macbook and cracked its screen. Upset, he ponies up some cash and heads to the Apple Store to get it repaired.

An Apple staff member takes his Macbook to the back of the store to examine the damage only to return moments later with a grin saying:

“Sir, it seems like I might have dropped your laptop when checking it out, I’m afraid we’ll have to replace it with a new one, if it’s OK with you.”

“Dude I love Apple so much; they replaced my broken iPod for free!”

7. By Creating (Possibly) The Simplest Ad Ever

To showcase the thinness of the newly released Macbook Air, Apple ran a TV and print ad consisting of a single shot of the Macbook air slipping out of a slim manilla envelope. The powerful visual made the headlines of numerous popular tech publications.

The visual was a clear and impressive demonstration of the slimness of the Macbook Air.

Because of its simplicity, the story made for great small talk. The more condensed a story gets, the more likely it'll get talked about.

" Oh my goodness this is incredible... the Macbook Air fits into an envelope!"

8. By Letting You Know It's All Going To Be Okay

FaceTime Everyday were a series of TV commercials that featured people communicating with friends and loved ones over FaceTime.

Focusing on the actors rather than the product (an iPhone 5), the ad demonstrated the emotional power of visual communication.

The ad ends with the line, "Everyday, more people connect face-to-face on the iPhone than any other phone."

Apple got people talking about their product by latching onto an issue that people are constantly thinking and talking about.

In an effect similar to the “1984” commercial, Apple addressed the global concern that technology was ruining interpersonal communication. The ad was a reassuring pat on the back that humanity was going to be okay.

“Does technology really divide us though? I mean, just look at FaceTime.”

Here's a quick recap of Apple's methods of creating chatter: