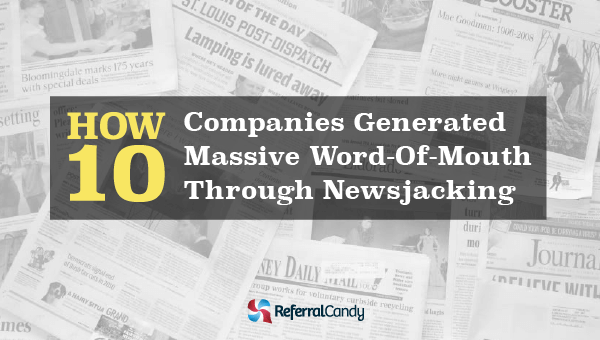 This strategy is called Newsjacking and we've gathered 10 great examples for your reference and inspiration, enjoy!

1: Kit Kat Sent Chocolates To The Edge Of Space

As the world watched Redbull send Felix Baumgartner up into the stratosphere, Nestlé tied four fingers of Kit Kats and a GoPro to a weather balloon and sent it up with him.

Nestlé’s message? Have a break… from gravity.

It's a winning combination of silly, amusing impractically and technical impressiveness.

During North Korea vs Colombia women’s football match the 2012 Olympics, the Olympic community mistakenly displayed the South Korean flag in place of the north’s.

Specsavers jumped at the opportunity and released a cheeky press ad the next day which quickly made it’s way around the internet too.

This ad is is hilarious because it's incredibly appropriate for Specsavers - the joke can't be shared without mention of the brand.

3: The London Fire Brigade Invites Celebrity Hero To Train With Them.

Kate Winslet was vacationing in Sir Richard Branson’s luxury caribbean home when it was struck by lightning.

The offer made the news, appearing on channels such as the BBC and Vogue.

The original story was shared because it's a feel good tale involving famous people. The brigade's offer added more "feel good" to the mix.

In the height of The Walking Dead (an AMC series portraying life after a zombie apocalypse) fever, Marketwatch rather brilliantly used characters and plotlines from the series to deliver 7 business management lessons.

The article was featured on both business and entertainment blogs.

The combination of an otherwise stereotypically boring business article with the hottest show on television was impressive to both fans of The Walking Dead and business people alike.

Newcastle spun this to their advantage, launching a campaign called Band Of Brands - a call for brands to come together to split the insane advertising cost… and air an equally insane advertisement with 37 separate brands in it.

People love David and Goliath type stories, this was both that and hilarious.

6: Audi, The Royal Baby And The Miracle Of Mechanical Childbirth

May 2015 brought the birth of a new royal baby. Many brands tried to ride the coattails of the wee prince, but none did so quite as spectacularly as Audi, who produced an impressive CGI video of an Audi giving birth to a littler Audi.

This ad used the news of the Royal baby in an unexpected manner, which made it stand out from the flood of Royal baby news.

7: Nintendo Responds To Oscar Results With A Giant Fire-breathing Turtle

While many brands reacted to the 2014 Oscars with glossy & stylish executions, Nintendo’s cheeky tweets received a better response than most.

Notably, when animated film Wreck-It-Ralph failed to snag an Oscar, Nintendo called on it’s resident villainous turtle, Bowser (who cameoed in the film) to throw some shade.

Nintendo is not a brand typically associated with the glitz and glam of the Oscars. This gave their content a unique voice that cut through other brands during the Oscars.

8: Arby’s Had The Perfect Logo For The Grammy’s

One of highlights of the 2014 Grammy’s was Pharrell William’s unconventionally sartorial hat. As the world tweeted about Pharrell’s off taste in headgear, Arby’s dropped the one tweet to rule them all (check out the retweets on this thing!).

Pharrell himself replied with a toasty pun and when he eventually put the hat up on eBay to raise funds for charity, Arby’s purchased the hat for a heart warming $44,100.

When dozens of variants of the headline “Apple Buys Beats For $3 Billion” plastered the front pages of websites all across the internet, Denny’s responded with the perfect topical tweet.

10: Snickers Gives Suarez Something Better To Chew On

Twitter went wild, mentioning the bite 339,269 times within the first hour of it happening. Many brands responded to the biting, but none did so quite as well as Snickers, who responded with a hilariously wry image.

As the world wondered why Suarez could not stop biting his opponents, Snickers had a tagline that served as the perfect explanation.