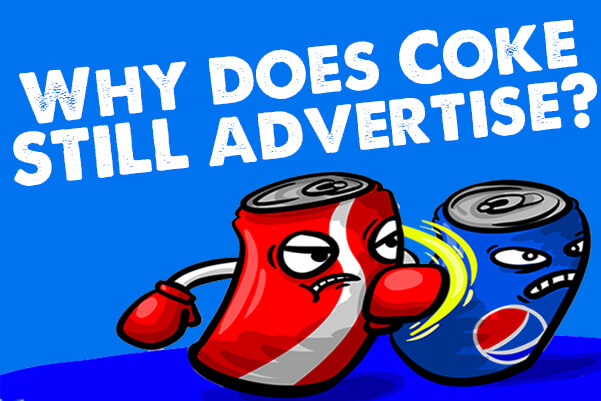 Found this gem on Reddit. Highly recommended read for anybody who comes in contact with advertising, be it as a consumer or a producer. That means everybody. ELI5: Why does coke still advertise? Answer courtesy of /u/p7r:

"I discovered some years ago that the point of most advertising at a certain marque level was not to acquire new customers, but to retain them or even stop "buyer's regret".

For example, BMW pretty much never expect somebody to see one of their adverts and think "Oh, that car looks good, I'll buy one of those!", because who the hell makes a purchasing decision of that size based on advertising? Most of their advertising is actually focused on people who recently bought one of their cars and is sat there thinking how much of a Ford or GM they could have got for 40% less. It prevents buyer's regret, and pushes them from just a buyer into a brand-loyal fan. It also enhances brand value in general, which is critical when establishing how much your brand is worth financially.

Brand value is where Coca-Cola come in. Frequently in the UK people will say "it feels like Christmas now", once the "Christmas is coming" Coke ad with santa on lorries going through town is aired. Think about how powerful that is: people associate the celebration of the Messiah's birth, or perhaps the most intense emotional experience of the year that you can point to on a calendar, with a can of sugar water.

When you hear "Coke", you immediately think of the colours of the can, the taste of the drink, and have an emotional response which is probably very happy, positive and affirming. That's what a lifetime of Coca-Cola telling you what they stand for has done to you.

Most of the Coca-Cola sold around the World is produced under license, it doesn't come from a magic well, and is relatively easy to synthesise. So how much would the company be worth if it weren't anything special? Their entire advertising strategy is to increase brand value which also helps them whenever a customer hesitates about buying their product.

EDIT: I strongly recommend if you're interested in how advertising really works, that you check out the counter-argument to all advertising, Ad Busters magazine. Their website is good[1] , but not nearly as awesome or eye-opening as their magazine.

EDIT 2: Some people are saying the difference between Coke and Pepsi is "obviously" different. Science says different. You might want to read this paper that says mental association with brand values is more important than taste[2] , so your brain is tricking you somewhat. Here is a good little write-up on neuromarketing[3] that asks some interesting questions.

EDIT 3: This is now my highest ranked comment on Reddit, and I just noticed I got Reddit Gold. Thanks! I really appreciate it, whoever you are.

EDIT 4: Filbs[4] mentioned in a reply to this post that it would be great to have somewhere where we could rip apart advertising campaigns and spots and work out advertiser motivation. As this discussion has shown, some ads are very straight to the point, some are quite complex and involve complex layering of emotions. Also, I felt it would be good to collect and discuss links to papers, articles and lectures on the science behind advertising. I'm quite well read on this area, but I'm not a professional, so I was reluctant, but I realised my fascination with this area is above and beyond the casual, so I present to you: /r/adbreakdown/[5] Please do consider joining in if this is an area that fascinates.

P.S. This morning this appeared in my news feed[6] and I thought some of you might appreciate its "honesty" ;-)"