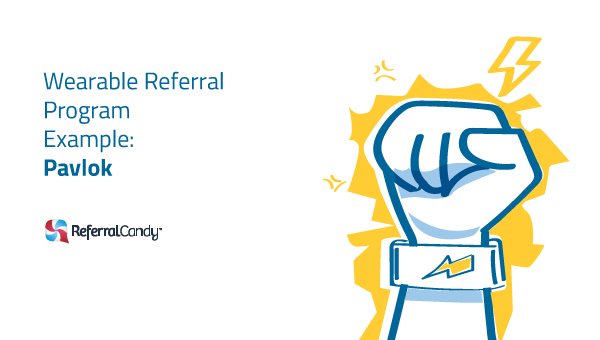 As one of the winners of Shopify's Build A Business Competition 2015, Pavlok is the first wearable that helps you break your bad habits.

In the mid 20th century, Ivan Pavlov documented in his famous classical conditioning experiments how associating a bell ring with food could eventually make a dog salivate automatically by ringing the bell.

After enough association, the person will no longer think of that habit as desirable, since it now comes with the annoying sensation.

Let's take a look at their referral program:

1. For every successful referral, Pavlok rewards advocates with cash worth 20% of their friend's purchase.

A Pavlok costs about $200, so giving advocates $40 in cash is a pretty good motivator for them to refer more.

Another good thing about Pavlok is that it's useful for everyone, since we all have bad habits we'd like to kick. This makes it much easier for advocates to gain successful referrals, since they can share the product with almost anyone.

To know more about whether one- or two-sided incentives would be better for your brand, check out the post we wrote on the topic.

2. Pavlok has a long blog post that teaches advocates effective sharing techniques, so they can get the most out of the referral program.

The folks at Pavlok are so keen on helping their advocates earn money from sharing, they wrote a blog post with reward calculations and templates for social media sharing.

By including templates for sharing through emails, Twitter and Facebook, advocates will be able to share Pavlok with their networks more easily, and probably with better conversions too.