Why Did Spotify Discontinue Their Referral Program? 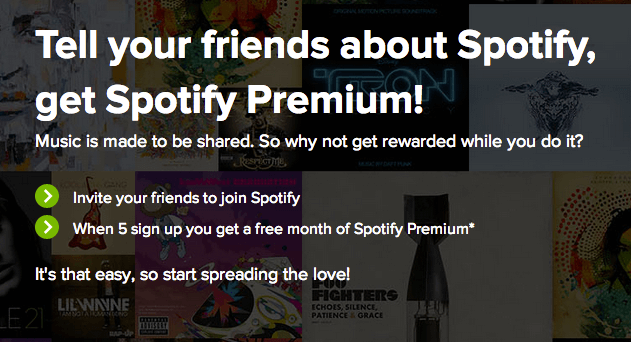 Spotify had a referral program in their earlier days – around 2014, but have since stopped running it.

This was a rather conservative referral program, for the following reasons:

One-sided referral program that only rewarded Advocates, not their friends

Generally, two-sided referral programs work best – but if you're really insistent on only rewarding one party, it's better to reward the friend.

This just boils down to social dynamics. Most people value their relationships more than a few dollars, and find it a little distasteful to profit from their friends without giving anything in return.

Read next: How to set up your referral program's incentives

The first hurdle is that your friends don't get anything. This makes you look like a bit of an opportunist, which can be a little tactless.

This comes across as a little user-unfriendly. I suspect they might've gotten better results if they gave both advocate and friend a free week of Spotify Premium for each successful referral.

Because ultimately, when you dig into the motivations of people who make referrals, the actual value of the incentive tends to be secondary.

Why did Spotify discontinue their referral program?

The most straightforward reason would be that they didn't think it was worth the cost.

This was likely the same thing that happened with PayPal's referral program. PayPal started out literally giving users money for referring their friends – $10 to both advocate and referred friend.

Once they started getting millions of customers, the network effect of PayPal ("everyone's using it") meant that people were happy to sign up even without an incentive.

So they can reasonably assume that things like retention and improving the quality of their offering probably matter more than getting more customers via referrals.

It's clear that referral programs, like loyalty programs, are something that customers have come to expect and want from businesses.