How OnePlus Got Word-of-Mouth With A $300 Marketing Budget 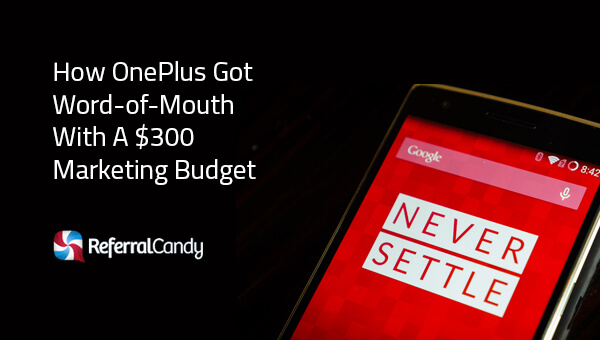 OnePlus launched with just $300 in their marketing budget. Here’s how word-of-mouth drove their remarkable brand recognition.

The smartphone business is cutthroat competitive, yet Shenzhen-based OnePlus has managed to carve a name for itself despite having a marketing budget of only $300 at its debut.

Their unconventional marketing tactics have courted controversy from the beginning, but the results are undeniable: sales continue to be strong with over 1.5 million units sold in under 12 months, and demand for invites to purchase their phones continues to build with 25.6M visits to the site in Dec 2014.

Here’s some of the ways they got people buzzing about their products.

1. Pick a fight with an established competitor - a really loud fight to attract attention

OnePlus came out of the barn doors guns ablazing.

Its official press release hailed its OnePlus One phone as a “2014 flagship killer” because it offered comparable specs at much lower prices. The successor (OnePlus 2) went one step further, calling its 2015 model a “flagship killer” of 2016.

It accompanied these bold statements with an even more provocative campaign to “Smash the Past”, in which fans would film themselves destroying their smartphones from competitors for a chance to win the OnePlus One; co-founder Carl Pei claims they attracted 140,000 entries.

Their message was so loud and clear that geeks everywhere continue to debate whether the phones are truly “must-have". Meanwhile, OnePlus enjoys all the sales from onlookers who want to see what the fuss is all about.

While OnePlus has been transitioning away from the invites-only system of smartphone sales that made them (in)famous, they still rely on it to build launch hype.

The exclusivity of the phone makes everybody want it a little more, and talk about it a lot more. They even run contests and giveaways where the invite is the prize.

They have also found other ways to build the aura of exclusivity, by having pop-up stores that offer only the chance to view the phone, and not to purchase it.

If people are willing to queue just to see the phone, surely it must be something worth talking about.

Despite complaints about the invite system, it served its purpose by building up a core, vocal fan base, from which OnePlus can now grow organically.

Read next: How 6 Companies Generated Word-of-Mouth Through Exclusivity

3. Be the first to do something, so people talk about it

The OnePlus One may have been the first phone of 2014 to be priced at the mid-range, yet share many of the same specs as high-end flagship phones. This established its reputation as a flagship killer for many of the technorati and became an easy recommendation all through the year.

It was also the first to make a case that makes your iPhone look like a OnePlus, or a drone called DR-1 (dr-o-n-e, geddit?).

For the OnePlus Two, OnePlus continues to harness the potential of being the first-mover, equipping their phone with a unique Alert Slider and USB Type-C connector, before anyone else.

Even their product launch had to be the “world’s first” in Virtual Reality.

4. Be transparent about criticisms and directly respond to your fans whenever possible

OnePlus has been remarkably transparent, and Pei unusually accessible, to their fans. This has helped build rapport between the company and its users.

His accessibility has endeared him to many OnePlus fans. Pei’s open apology on the OnePlus forums drew an outpouring of support and discussion.

More recently, his recent blog post, in which he asks Samsung for advice on OnePlus’s logistic issues, immediately drew media attention as well. Fans also commented that they appreciated his transparency and acknowledgment of OnePlus’ flaws.

A movie about OnePlus’ story is also in the works, continuing to build on OnePlus’ inspiring narrative about underdog triumph in fans’ minds.

5. Carve your own niche and dominate it

OnePlus looked at all the controversy around its marketing and chose to embrace it. In interviews, Pei speaks frequently about OnePlus’ advertising goals, and he has even written open blog posts detailing their marketing strategy.

As a result, they can pull off marketing stunts like releasing phone specifications one at a time to build hype because they know that fans will “appreciate [it more] than making one big announcement”. In other words, their fans know what they are getting into, and want to be hyped up!

This all works to cement OnePlus’ reputation as a marketing powerhouse that everyone has to talk about. After all, you’re reading about them now, aren’t you?