How 13 Of The Best Kickstarter Projects Achieved Success 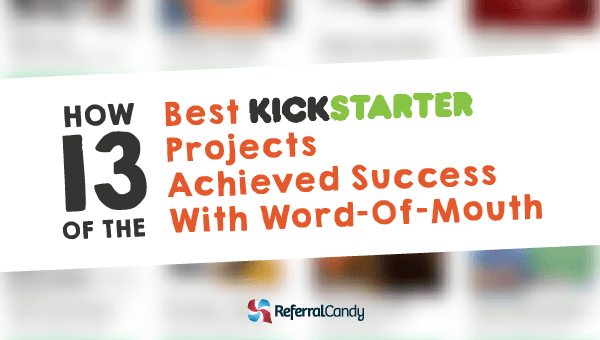 Kickstarter projects succeed because of word-of-mouth. Projects don’t come to fruition unless they meet their goals, backers have to get involved in spreading the word to see their favoured projects succeed.

Even after funding is complete (every project on this list has exceeded it’s goal funding!) the system of stretch goals keeps backers involved in sharing these projects.

There are few better platforms to find stellar examples of word-of-mouth in action. We’ve gathered our favourites from a variety of categories for your reference and analysed how each project made word-of-mouth work for them, let’s get (kick)started!

Exploding Kittens is a (hilarious!) card game designed by Elan Lee, Shane Small and Matthew Inman of popular webcomic The Oatmeal. The project exceeded it’s funding goal in eight minutes and set the record for the most number of project backers in Kickstarter history a week later.

Matthew Inman is an internet hero with a humongous fanbase. This, combined with the project’s newsworthy initial success and the absurdity of the game (which includes monstrous cats and sentient armpit fuzz) led to massive media attention, driving more cats to their explosive deaths.

The Oatmeal guy created a card game about exploding cats!

Zack Brown’s pitch rallied nearly 7000 people to raise 5500% of the project’s intended funding. As the project blew past it’s humble intention of funding a slightly overpriced bowl of potato salad, it evolved into a potato themed party dubbed “PotatoStock 2014” with a large cut of proceeds going to local charities.

My favourite thing about the project though, is the creators promise to say backer’s names out loud while making the salad.

The Potato Salad project sounds impossible and crazy - which is precisely why it succeeded five thousand times over. People love crazy stories and want to be part of them.

A clear indication of this was the a major spike in donations after Brown began offering t-shirts with the slogan “I Just Backed Potato Salad”.

Pebble Time is a smartwatch with 7 days of battery life and a colour e-paper display.

The Pebble Time is the most funded project in Kickstarter history, a title once held by its predecessor, the Pebble.

THE LESSON: If It Worked Once, Do It Again / Capitalise On Timing

By returning to the same funding platform, Pebble Technology drew from their first success to create an even bigger win.

Owing to the quality and legendary status of the first Pebble, the creators had the trust of the Kickstarter community, something they frequently acknowledged in their campaign.

The project also benefitted from its timing. As news of the Apple Watch flooded every facet of the media, Pebble time gained significant attention (Forbes, Gizmodo, Fast Co.) as an alternative smart watch.

Learn more: How Pebble Sold A Million Watches With Word-Of-Mouth: 6 Tactics and Examples

Video Game
$3,845,170 / $900,000
= Mighty No.9 is a Japanese style side scrolling action platform starring a powerful robot named Beck. The game is the spiritual successor to Capcom’s retired video game series, Megaman. Both Mighty No.9 and Megaman are creations of project creator Keiji Inafune.

THE LESSON: Answer The Cries Your Competitors Won’t

Throngs of Megaman fans were enraged by Capcom’s decision to retire the 27 year old series. When countless petitions for new Megaman games and pleading/intensely furious posts on forums went unanswered by Capcom, the creators of Mighty No.9 gave the fans exactly what they wanted.

Gathering a team of veteran staff who worked on the Megaman series and some fresh talent, Mighty No.9 was unveiled at the Penny Arcade Expo, one of the world’s largest video game expos. News of the project immediately hit every major video game site on the internet and the front page of Reddit.

BRO! INAFUNE IS MAKING A NEW MEGAMAN... BUT IT’S NOT MEGAMAN!

The elevation dock is a charging stand for the iPhone designed to solve problems existing docks presented such as being too light or not being compatible with phone cases. It’s designed to look and feel like an Apple product, utilising an aluminium finish reminiscent of Apple’s own.

THE LESSON: Serve An Existing Market

At the time of Elevation Dock’s campaign, the iPhone was the best selling smartphone on the planet. By elegantly solving a problem faced by a large base of users with a design similar to the original product, the Elevation Dock generated conversation within Apple’s circles and fan blogs.

Yeah the iPhone's pretty awesome. You know, there’s this dock on Kickstarter…

The Oculus Rift is a virtual reality headset that allows gamers to fully immerse themselves in a video game environment. It was a nominee for the prestigious “Best Of Show” at E3 2013.

“ DESMOND YOU GOTTA SEE THIS, VIRTUAL REALITY IS NOW REAL!”

The Micro 3D Printer is the first 3D printer solely targeted at consumers. It’s designed to be used right out of the box and doesn’t require the user to design their own 3D models, instead offering a library of pre-designed objects.

THE LESSON: Focus On A Niche

From 2011 to early 2014, numerous 3D printer projects were run on Kickstarter. Where most projects differentiated themselves from the competition through enhanced features or price, Micro chose to focus exclusively on creating a product for consumers and succeeded where many others failed.

Honey, there’s finally a 3D printer designed for tech-idiots like us.

The Dash is the world’s first wireless smart in ear headphone. It tracks exercise performance, fitness and body functions.

THE LESSON: Innovate Within A Trend

The past few years have brought with them an avalanche of fitness peripherals, two popular types being wristbands and wireless earphones. The Dash combines the two in a stroke of genius and earned features on The Verge and Engadget.

Oh maybe you shouldn’t get that *insert fitness earphone/tracker here* yet,

take a look at this cool hybrid thing on Kickstarter first

The Apollo Shirt is a classic dress shirt made from the same materials NASA uses in their space suits to regulate body temperature, moisture and odour.

THE LESSON: Don’t Just Focus On The Majors

MoS avoided pitching their story to the major tech sites. Instead, they pitched over 150 blogs. They wrote customized emails to all sorts of blogs that were relevant to their product- fashion blogs, aeronautical blogs, etc- to see if they were interested in featuring the Apollo shirt.

They met their funding target of $30,000 within 5 days. The campaign was featured on TechCrunch and Forbes soon after.

Damn dude you’re sweating like a pig, I read about a shirt made from astronaut cloth…

Learn more: How a Small Menswear Brand Utilized Word-of-Mouth to Get Over $420,000 On Kickstarter

The Opena Case is an iPhone case with a built in bottle opener. Unlike most other novelty cases, the Opena Case was designed and built with an emphasis on quality.

Open Case’s creators built prototypes of their product early and carried them around everywhere they went. They received incredible reactions from their friends:

“Whoa, what was that? Did you just open a beer with your phone? What is that thing?”

By prototyping and gauging interest early, the team was able to pinpoint what people liked about their product and could craft their campaign around it.

HA! I know the perfect phone case for an alcoholic like you!

Learn more: How Opena Case Hit 189% Of Their $15,000 Kickstarter Target And Built A Million Dollar Business

The Coolest Cooler is a portable cooler that includes a blender, a music player, a USB charger and a dozen other features that provides everything you might need for a picnic or party.

THE LESSON: Pick The Right Season

The Coolest Cooler first ran on Kickstarter during the winter of 2014 where it failed to raise $125,000. The cooler returned to Kickstarter in the height of summer... and raised 13 million dollars, becoming the second highest funded project of all time.

Yeah we should have a pool party, this weather is crazy! Say... have you heard about the Coolest Cooler?”

Learn more: Deciphering The Coolest Cooler: How A Tricked Out Cooler Box Climbed To The Top Of Kickstarter Through Word-Of-Mouth

THE LESSON: Bring In The Experts

PonoMusic's Kickstarter campaign features rave reviews from established musicians including Dave Grohl, Norah Jones, Dave Matthews, Tom Petty, and Eddie Vedder, many of whom describe the sound as the best listening experience they've ever had outside a studio. Thought the Pono eventually failed to live up to that promise, having trustworthy names from multiple genres of music lent credibility to the quality of the player.

Dave Grohl said it was awesome, so it's DEFINITELY awesome.

Shovel Knight is a retro styled platformer about a shovel wielding knight who has to defeat the nefarious “Order Of No Quarter” in order to defeat the evil Enchantress and save his lover.

THE LESSON: Appeal To Nostalgia

Shovel Knight pitched itself as “A groundbreaking love letter to 8 bits” (referring to 8-bit games of the 1980s/90s), featuring mechanics from popular games of the period while drawing inspiration from modern hits. Joe Matar from Den Of Geek sums up the effect of nostalgia through his own story: “My contribution to this Kickstarter was a moment of weakness derived from a misplaced nostalgia.”

Jessy do you remember Duck Tales? There’s a game on Kickstarter based on that!

Now that you've seen the secrets behind how 13 of the best Kickstarter projects succeeded, let us know: which campaigns have you backed, and what was the secret to their success?

Read next: 6 Entrepreneurs Weigh In: The #1 Way To Accelerate Word-of-Mouth Marketing