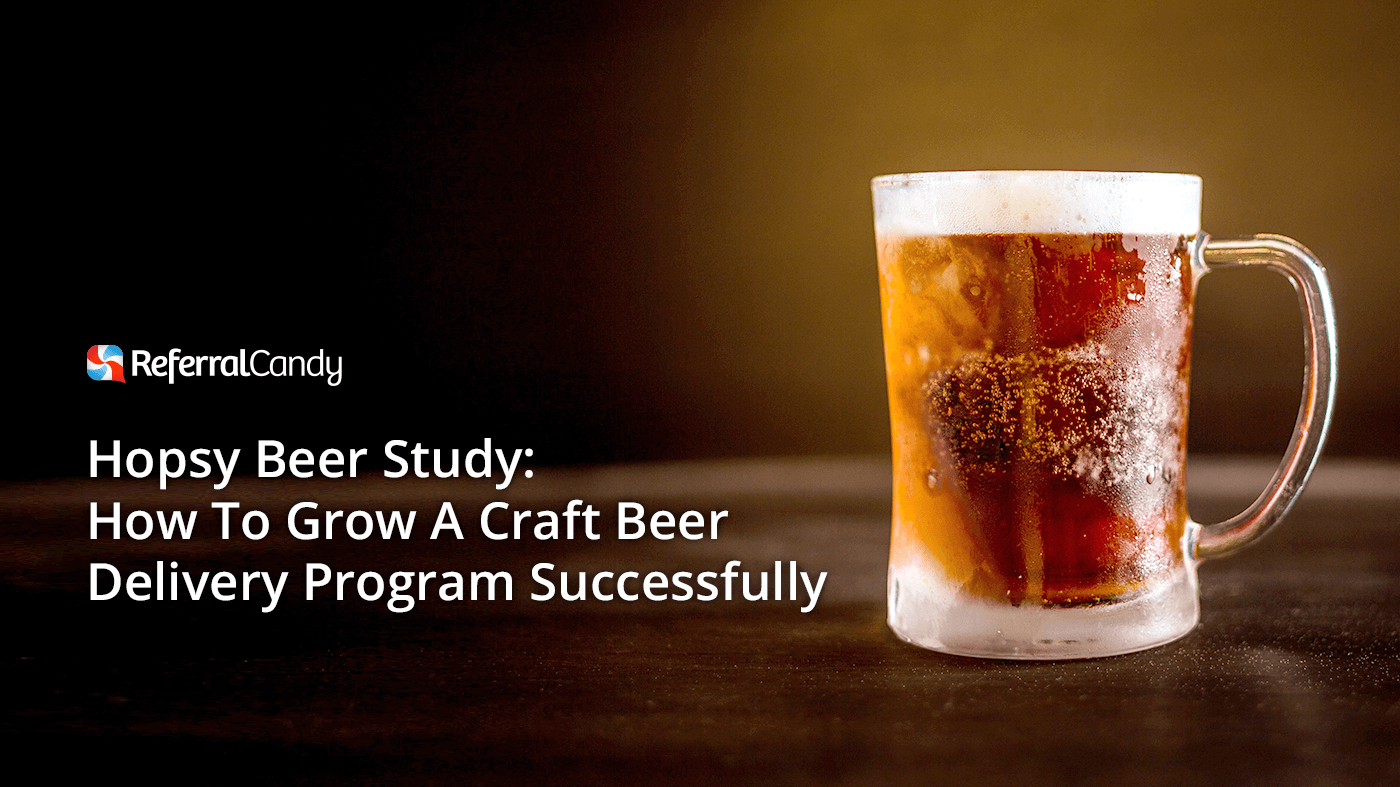 The current market is hypersensitive to customer needs. Sophisticated algorithms and data tracking notify the suppliers of the shifting demands of customers.

This is true for every product in the world, be it accessories, food, or beverages.

While coffee, tea, cold drinks, and other packaged beverages have long been enjoyed in the comfort of your home, one part of the beverage community was bound to leave their cozy abodes to quench their thirsts.

Beer enthusiasts have a knack for craft beers. Craft beer is loosely defined as a locally brewed beer by a small scale brewer. Widely popular in the United States, craft beer amounted to nearly $26 billion in sales in 2017.

Small-scale breweries often produce the best beer but are unable to expand beyond the local demographic due to a lack of awareness.

While other beverages are enjoyed at will, beer enthusiasts are left to go the distance to fulfill their desire.

With over 20,000+ brands and 150+ styles as of early 2018, it is entirely likely that your local pub doesn’t offer beer like you had the last time you went to ‘that’ brewery on the other side of the state.

In Hopsy’s own words “…there were so many breweries that no one could possibly get to know them all. The breweries wanted more people drinking their beer. Drinkers wanted to try more breweries. It sounded like an opportunity.”

Hopsy is the brainchild of founder Sebastian Tron, who also functions as the CEO of the start-up. It was founded in 2015 with the mission to ‘make the beer scene a little better.’

They started with the standard growler-based beer delivery system. In 2016, they opened up in Albany, with California acting as the middleman to local breweries and the local population.

However, they soon realized the need for innovation.

Growlers were not fit for the idea Hopsy envisioned. They were capable of carrying beer to your home, but the beer would go flat by the time it arrived, and the glass container did not really help with pouring.

Unless you like warm, flat beer that only went down the drain the next day, you also would have realized the need for something else.

Also available, was the Kegerator, but they are built explicitly for draft beer. The prototype Hopsy had in mind resembled a Keurig - fresh, cold beer at the push of a button. This was when they invested in a SUB, a counter-top appliance fit for your kitchen.

The SUB weighs 15 pounds, and its dimensions are (width, height, depth): 17.9x9.3x12.8 inches. Much like a home coffee-maker, the SUB just replaces the packaged coffee seeds with a Torp of fresh beer.

A Torp is a bottle of beer designed by Hopsy, customized to fit into the SUB. The unique bottle has a 2-liter capacity, roughly 67 ounces, which makes it larger than a growler. To further build on this coffee maker analogy, the device itself is produced by KRUPS, one of Nestlé’s hardware partners.

With an established structure based on prior growler experience, Hopsy presented the device to the Bay Area in 2016. The SUB was offered for home and office installation, because who doesn’t need a cold glass of beer to help them through a long day at work?

The Hopsy warehouses have recently expanded beyond Albany. There are currently three warehouses,  located in San Francisco, San Diego, and New York.

How Do They Work?

Hopsy offers the SUB machine and a wide array of beers to choose from.

Like many creative subscription-based services in the United States, Hopsy uses a questionnaire to determine customer tastes.

The questionnaire opens up with a question asking for your location. Hopsy only delivers to the East Coast, West Coast, and the Mid-West. If you live elsewhere, unfortunately, you’ll have to wait.

The questionnaire then asks about a few preferences, such as, for coffee, breakfast, and bread. After you are done answering all nine questions, you are assigned a personality type. This can range from a ‘Hop Head,’ who loves his beer bitter, to a ‘Light Side,’ who is an easy drinker that leans to the lighter side.

The most significant part of the company is the Hopsy Beer Club. The ‘club’ is a group of monthly subscription members that form the core of Hopsy customers.

The members are delivered four mini-kegs (torps) in return for $59.96 per month. The delivery intervals are subject to owner discretion and can be scheduled for every 2, 4, or 6 weeks. In case of more kegs, you can get additional kegs at $14.99.

The advantage of subscribing to the Beer Club is cheap pricing, since subscribers save approximately 25% off the retail price. Even the additional kegs ordered with an existing subscription are eligible for a 25% off discount.

In addition, Hopsy also offers special offers for subscription holders. These special offers are for a limited time and vary throughout the year. Additionally, the Beer Club also provides customers with the option to skip a month.

In case of budget constraints, an email to Hopsy will ensure that you do not get torps delivered to your address for a month. Nonetheless, the company expects loyalty from its customers in return for such services. Hopsy maintains a commitment period, the current being three months.

To avail special discounts and offers, a minimum subscription bounds the customer to at least continuously order for three months. This ensures guaranteed revenue for the entity, which helps in deciding and negotiating discounts with breweries.

The delivery fee for a standard four keg delivery is a $14.99 via Deliver-It, DICOM, or CDL. The Torps are ‘slim’ in order to save waste and consume less space.  However, for a delivery that consists of 4+ kegs, Hopsy charges a delivery rate of $1.

Local home delivery (limited to San Francisco and San Diego) is available for an easy $4.99. This is, however, only for residents residing within selected zip codes, and in reach of a Hopsy team member. The member will drop by your desired address to deliver your goods.

In-store pickup is a unique delivery option made available by Hopsy. This offer is exclusively for Albany and Ale Tales residents if you are within 50 miles of the Hopsy store. You may also pick up the delivery yourself, negating the delivery free.

Hopsy prides itself in the partnerships it has developed with local breweries.

It started off as a growler delivery service and interacted with several small and medium scaled breweries in the beer-rich region of the Bay Area. As it grew, so did it's partners.

Hopsy’s list of brewing partners exceeds 50. While the overwhelming majority consists of local breweries, the list also includes some big names like Heineken, from the Netherlands, and Birra Moretti, from Italy.

Hopsy introduced a marketing strategy that enables you to ‘enjoy a beer box for $1 for every friend that buys a SUB.’

The overview is simple. Refer Hopsy’s SUB to a friend and get $59.96 in beer credit. Sounds like a steal, right? Well, think again.

Hopsy has crafted a set of eligibility rules regarding the offer. The list of rules is very carefully designed to avoid scams and fraud.

Several safety parameters have been set to ensure that people who order are the same people who truly enjoy beer.

The marketing strategy is clearly devised to influence beer lovers. It is based on a referral program where one existing Hopsy SUB user refers the same product to their friend.

A deeper look into it, and it sounds like a cleverly devised plan. Beer enthusiasts that own a SUB are likely to invite friends over for beer testing. Fresh beer out of the brewery taproom is sure to incite people into considering buying the same SUB for their own place. The $59.96 in ‘beer credit’ acts as an added incentive for the referred friend to buy a SUB.

The strategy to ‘Invite A Friend’ is another example of consumer psychological manipulation. It provokes people to refer a SUB in exchange for beer credit. The costumers will buy the SUB through referrals, claiming they wanted it anyway, so why not benefit a friend in the process. However, like other similar techniques, such as urgency and scarcity bias, this strategy pushes the customers into making a purchase through psychological manipulation.

By applying this technique, not only does Hopsy sell another SUB machine and increase its sales, but also acquires a new costumer bound to place regular orders. The Hopsy SUB only fits in the torps Hopsy provides, so whenever the torps finish, both old and new customers are bound to order from Hopsy again – guaranteeing a stream of revenue.

Hopsy prides itself on the fact that there is no need to worry about sales if they can provide a 5-star service to their current customers. Their website is built with attention to detail which, among others, provides ample social proof. The 385 reviews on their website add up to an impressive average of 4.5 stars.

Yelp reviews rate the company at three stars (108 reviews) with the most frequent complaint being that of delivery, and the most appreciated feature being customer service. Hopsy’s patience and commitment have been lauded by all customers.

Yet to cater to the majority of the United States, Hopsy is still a work in progress. Even then, the website performs comparatively well for a startup.

The website receives 1,200 unique visitors, with an average of 3.2 pages viewed, per day. Such influx directly relates to approximately $43/day in advertisement revenue. Based on current figures, Hopsy looks set to continue progressing further.

Owler estimates Hopsy’s annual revenue at $4m. The impressive figure looks more appealing when considered in the context of Hopsy’s limited operations. Hopsy is limited to only three regions, and that too, with limited delivery access.

The approximately 70+ employee’s work in healthy working conditions. The employees enjoy casual wear (including flip-flops), guaranteed $15/hour, a free SUB machine with discounted torps, and the privilege to enjoy a beer at work! Sounds pretty awesome.

Now, who wouldn’t like a cold beer at their office desk? Investors have also tapped into the promising potential of the beer delivery company. The investment figures for the New York-based company are in excess of $1 million.

The current business statistics serve as a promising indicator of future success.

How Does The Future Look?

Hopsy is relatively new to the business, with only three years under its belt. That illustrates significant success, since over 60% of startups cease business under two years.

Hopsy is striving to expand. They have already announced the inclusion of Chicago into the growing list of cities where beer enthusiasts enjoy beer straight from the taproom, to their kitchen counter. Like all startups, it grapples with the financial and geographical constraints of a growing business.

However, their rise in these three years is proof of their ability to provide a unique service to the masses and their ability to grow despite the constraints. The future remains uncertain, but the present advocates for the future growth of Hopsy.

Aqiba is a professional writer based in Houston, Texas. Her passion is content writing and has been writing for 7 years.