How Companies Get Word-of-Mouth To Delight Their Customers 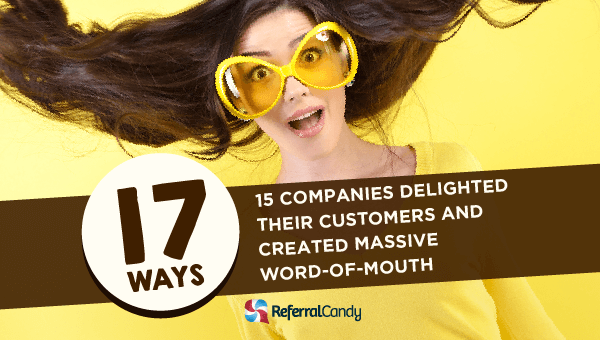 The best way of generating word-of-mouth is to craft delightful experiences your customers want to share. We've compiled a list of 17 examples of how 15 companies delighted their customers for your reference, enjoy!

A lady checked into her Vegas hotel only to find she had forgotten to pack her favorite shoes.

She tried ordering them from Zappos to her hotel only to find they were unavailable.

She called Zappo’s customer service for help only to find the shoes delivered to her doorstep - a Zappos employee had physically gone to a rival shoe store, bought her shoes, and delivered them to the lady at no charge at all.

3 and a 1/2-year-old Lily Robinson saw that Sainsbury’s Tiger Bread wasn’t stripped. It looked more like… Giraffe Bread. So she wrote them a letter to Sainsbury’s to let them know what she thought.

A Sainsbury’s customer service staff (aged 27 and 1/3) sent an adorable reply with an attached gift card thanking Lily for her advice. This story went viral and Sainsbury's has actually renamed their Tiger Bread.

On a cold Christmas morning, a snowed-in 89-year-old war veteran found himself in need of groceries.

His daughter called all the nearby grocery stores and found none of them delivered groceries, including Trader Joe's, but they were willing to make an exception.

After recommending a long list of products beneficial for the man’s health conditions, Trader Joes sent the groceries to the man’s home completely free of charge with a cheery “Merry Christmas”.

A family staying at the Ritz Carlton Bali was distraught to find that the allergy-friendly foods they had packed for their son had gone bad during their flight.

Upon learning of the situation, the Executive Chef instructed his mother-in-law in Singapore to procure the foodstuff the boy needed… then flew her over to Bali to deliver the items by hand.

5) The Ritz Carlton Gives A Stuffed Giraffe A Relaxing Holiday‍

A boy lost his favorite stuffed giraffe, Joshie, while vacationing at the Ritz Carlton. His father calmed him by telling him Joshie was just enjoying an extended vacation. When his father told the Ritz Carlton what had happened, they staged a photo op documenting Joshie’s vacation which included suntanning by the pool and a relaxing massage.

6) Apple Was A Total Bro

A man returned his recently purchased iPad with a note that said “Wife said no.”

A man dropped his brand new Macbook and cracked its screen.

Upset, he ponies up some cash and heads to the Apple Store to get it repaired.

An Apple staff member takes his Macbook to the back of the store to examine the damage only to return moments later with a grin saying:

“Sir, it seems like I might have dropped your laptop when checking it out, I'm afraid we'll have to replace it with a new one if it's OK with you.”

8) Amazon Hired The God Of Thunder As A Service Rep

In a hilarious exchange that went viral, an Amazon customer service rep who may or may not actually be named Thor helps a customer with his book delivery, much to his delight.

Me: Tracking shows delivered but shipment not received

Me: Greetings, Thor. Can I be Odin?

Amazon: Odin, Father, How art thy doing on this here fine day?

Me: Thor, my son. Agony raises upon my life.

Amazon: This is outrageous! Who dares defy The All Father Odin! What has occurred to cause this agony?

Me: I'm afraid the book I ordered to defeat our enemies has been misplaced. How can we keep Valhalla intact without our sacred book?

Amazon: This is blasphemy! Wherever this book has been taken to, I shall make it my duty to get it back to you! I fear it is Loki but I dare not blame him for such things. I shall have your fortune returned to you and thereafter we can create a new quest in order to get the book back to you.

Me: Very well my son.

Amazon: Allow me some time to round up my allies and complete this my father.

Me: Do it for me Thor, but most importantly do it for the mortals whose destiny (and grades) rely on this book.

Amazon: Alas, the treasure has been returned to you. You now need to reinstate your book into your archive so that you may yet receive it soon. I shall have the Valkyrie deliver it to you as fast as their wings can move.

Me: Ok so roleplay aside I have my money back and reorder the book?

Amazon: haha yes I have refunded you and you need to reorder the book.

Amazon: Have you placed the order

Me: Let me do that
done

Me: Wow hooking me up for one day delivery? Sweet!

Me: I've heard Amazon has great customer service and this just proves it! thanks man

Amazon: No problem, is there any other issue or question that I can help you with?

Me: Nah that was it. Really appreciate it

9) Virgin Trains Has Got Your Back (And Your Butt)

A teen pooping on a Virgin train was out of toilet paper. He tweets Virgin Trains and was pleasantly surprised when staff hunted down his cubicle and handed him a roll of wipes.

WestJet’s Virtual Santa installation asked passengers what they wanted for Christmas. When they arrived at their destination, they also found their dream presents on the baggage carousel waiting for them.

11) Lego Sends Ninjas In The Mail

A young boy lost a lego ninja Minifigure after taking it with him to the supermarket.

He wrote to the Lego company and they replied by sending him a one-of-a-kind custom Ninja (with an enemy to fight!)

Two students found their favorite popcorn was no longer on sale at their local Tescos.

They sent a sonnet to Tescos’ chairman and receive a poem in reply with a £10 gift card.

14) Morton's Has Your Steak Waiting At The Airport

Before his flight, Peter Shankman jestingly tweeted Morton's and requested a steak to be waiting for him when he lands.

Morton's sends a tuxedoed staff member to the airport waiting with a fine steak absolutely free of charge.

A man’s grandson was about to be pulled off life support whether or not his grandfather was around to see him for the last time.

Aware of the man’s plight, a Southwest Airlines pilot delayed a flight for the man saying, “They can't leave without me and I’m not leaving without you.”

When unsubscribing from the Hubspot newsletter, you’re greeted by a video of a teary Hubspot employee delivering a hilarious breakup speech.

He also wants you to know you can stay friends… with benefits.