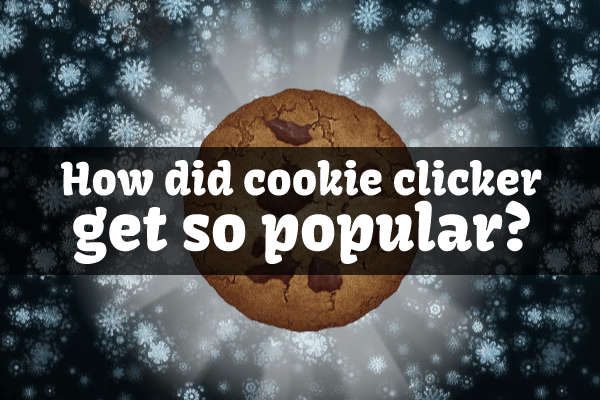 When describing it to my bemused colleagues, I found myself saying "Well, you do stuff to make a number go up, and that number going up allows you to do more cool stuff, which then makes the number go up faster. You get achievements and progressively cooler looking things." One of them said, "You've just described pretty much most games in existence, and business, too." Well- yeah. The creator of Minecraft declared it "one of the deepest gaming experiences".

Why is it so addictive and popular? Could we reverse-engineer it to see what made it popular, when it used so few resources, and was essentially a fun side-project? What did Orteil get right that so many professional game designers often get wrong?

Interesting points about the game:

It was the 2nd most searched-for video game in all of 2013. For context, the most searched game was Grand Theft Auto 5, which cost A QUARTER OF A BILLION DOLLARS to make, and is part of a long franchise with loyal customers. In contrast, Cookie Clicker was made by a self-taught French guy in a week or so, just for the fun of it.

Loyal fanbase. Cookie Clicker players actually take the trouble to turn off AdBlock so that that the creator can make money! It’s something very interesting to think about in an age where we tend to assume that people only want stuff for free, and will happily and mercilessly pirate anything.

Strong community. The Cookie Clicker forum has thousands of comments. The discussions in there are amazing: people make threats to the creator of the game, engage in flame wars, discuss their motivations for doing it. It's a little bit funny, a little bit creepy, and almost bizzare if you think about it.

It wasn’t the first of its kind. There are other games that are seemingly meaningless. There’s one where you click on a cow. What did Cookie Clicker do differently? Let's explore it:

No pretensions – simple and memorable.

It matters a lot is that the game doesn’t pretend to be something it's not. It’s like a really good, campy b-grade movie. (Snakes on a Plane, anybody?)

A game like Cookie Clicker would never have been created by a "professional" team with a big budget and grand plans for world domination. It was created as a fun side-project, for laughs.

Read next: 20+ examples of simplicity in marketing

It’s something worth talking about. "Have you tried that game where you click cookies all day?" "That sounds ridiculous." "No, really, you should try it."

If you want your stuff to get shared, you want to make sure that it's something people will tell others about. Why would they do that? That's your job to figure out!

Read next: 18 examples of unexpectedness in marketing

It (deceptively) doesn't ask for too much.

Just as a cigarette takes only a couple of minutes to smoke, Cookie Clicker doesn't demand hours of your time. You can leave it running inconspicuously in a tab on your browser and check on it every so often.

This has some interesting implications for all creators. If you want to compete with major productions (movies, novels, games), perhaps it's best to start with something simple and bite-sized.

Read next: 7 examples of 'foot-in-the-door' marketing

The name of the game is "Cookie Clicker", so you already know you're going to be clicking on a cookie.

As you click, you can see that there are powerups you can buy at the right hand of the screen. You know what you gotta do.

Click 15 times and you buy your first Cursor, and immediately two Cursor upgrades appear. You're curious to see what those upgrades do, and they don't seem to ask for too much- what, 20 clicks.

You always have a pretty clear idea of what you might go for next, and it always seems just slightly out of reach. You put in a little effort and you get the reward.

Read next: How to setup your referral program's incentives

The game knows that you'll get bored of doing the same old thing for too long, so it incorporates a sort of "accelerating growth" model, where you keep getting more powerful. You get to see the numbers go up faster, and these numbers give you more options.

Iniitally, your main task is clicking. Later, your main task is choosing which powerups to buy, which kinda gives you a "middle management" sort of role. Next, you start fussing about which upgrades to add to your powerups. Welcome to Corporate. It makes you feel like you're "growing".

The first version of the game was simplistic in every sense- visuals, game mechanics, rewards. But the minimum-viable-product was there, and there was a market for it. It was enough to get lots of people clicking a fair bit.

Orteil would've been surprised at the amount of attention (and unsolicited feedback) his game was getting, and that would've compelled him to pu in more effort into refining and improving the game.

I hope that was interesting to you! I think everybody- writers, programmers, designers can learn quite a bit from observing and studying Cookie Clicker.