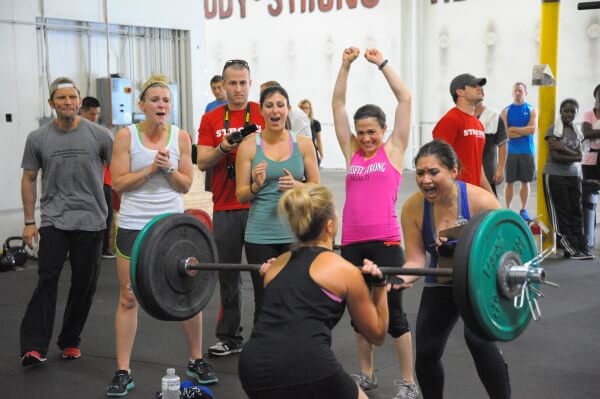 No man is an island, and no customer acts alone.

If you're selling a product that solves a problem, you can be certain that the people who have that problem will interact with others who share the same problem. This is especially true in the digital age, where there are Facebook Groups and subreddits and Slack groups and blogs and all sorts of communities who share common interests.

These communities exist in a staggering range of configurations, from tiny knitting circles to massive movements that could be considered informal organizations altogether. And they invariably share and exchange information, comparing notes on whatever it is that piques their shared interests.

This can be somewhat tricky territory for brands to navigate. If you want to build a great brand, you'll need to earn the respect and admiration of the communities that your customers belong to. And as people get better-informed, it becomes harder to simply throw marketing dollars and ads at communities in order to win them over. Some brands can pay to try and win a community over, and yet find themselves being ridiculed for it. Others can be almost entirely detached, and yet find that communities love them anyway.

It can seem like a lot of work, but if done well, a brand can actually become a respected and beloved pillar of a community. This pays off tremendously – the brand becomes synonymous with the community itself, guaranteeing relevance, sales and longevity for the brand for as long as it remains relevant to the community.

Let's look at some examples.

1. Sephora establishes itself as the place for makeup affecionados with its Beauty Talk forum at community.sephora.com

A recurring theme throughout this post: having privileged access to a community can give a brand a competitive advantage in the form of insights and feedback from customers. BeautyTalk users spent 2.5 times more than regular Sephora customers, and the biggest fans spent more than TEN times more.

2. Etsy's founders discovered the need for an artisan marketplace while hanging out on craft communities

Etsy's founders used to run a web design shop. They were working on getcrafty.com when they discovered the need for a marketplace for handmade crafts. So, while they built Etsy, they reached out to the craft community on getcrafty.com and Craftster.org, which had an even larger user base, and won them over.

Learn more: How Etsy Became An Online Craft Fair Worth $195.6m In >10yrs Through Word-of-Mouth

Converse doesn’t take a cut of the profits, or own the songs, or ask them to advertise their shoes, nothing. They do it just for the opportunity to participate in the community that adopted their brand.

4. TOMS has a large following of engaged 'tribe members' who help to organize events, give away shoes and so on

TOMS founder Blake Mycowskie is famous for looking more like a backpacker than a typical CEO. His book Start Something That Matters was a hit among entrepreneurs. Unsurprisingly, the TOMS tribe has grown in leaps and bounds over the years.

Learn more:How TOMS Shoes Built A Multi-Million-Dollar Movement With Word-of-Mouth (And Gave Away Millions Of Shoes)

5. THINX sells period-proof underwear, and has assembled an inclusive, feminist community in the process

The product is really part of their bigger, broader vision of correcting misconceptions and educating the public about periods – a vision that, unsurprisingly, has lots of people eagerly want to help realize.

6. HYPEBEAST is a shoe blog that grew into much, much more with the help of its passionate sneakerhead community.

HYPEBEAST began as a personal blog in 2005, before SEO and modern Internet advertising started ramping up into high gear. It grew into what it is today through word-of-mouth, as sneakerheads would refer other sneakerheads to it.

Black Milk is famous for their social media engagement, and their Facebook page is where most of the magic happens. New products are announced, queries are answered, and competitions are usually held there.

Beyond the main page, there are dozens of groups such as the Black Milk Clothing Swap, Sell and Buy group, where over 15,000 fellow Sharkies can buy, exchange and sell products to each other without going through the company.

Melt Cosmetics was founded by popular makeup artist Lora Arellano, who got especially famous after doing makeup for Rihanna, with cofounder Dana Bomar on /r/makeupaddiction and Instagram

9. GoPro earned kudos for being honest about software bugs, and addressing them

10. Razer earned the respect of its community by honoring an unauthorized discount, despite taking heavy losses in the process

Earning the respect of a community goes a very long way in building a brand's credibility.

Learn more: How Razer Became The Go-To Brand For Gaming Gear via Word-of-Mouth

The OnePlus founder titled "Sorry for the delay guys"

His accessibility has endeared him to many OnePlus fans. Pei’s open apology on the OnePlus forums drew an outpouring of support and discussion.

More recently, his recent blog post, in which he asks Samsung for advice on OnePlus’s logistic issues, immediately drew media attention as well. Fans also commented that they appreciated his transparency and acknowledgment of OnePlus’ flaws.

Learn more: How OnePlus Got Word-of-Mouth With A $300 Marketing Budget

12. Tesla Motors has strongly-attended shareholder meetings, where the community shares their thoughts about next steps for the brand

The forums at Tesla Motors have been highly active since long before the electric car company entered popular consciousness.

13. Apple is known to have some of the most intense fans and evangelists among all the brands in the world.

Learn more: 8 Examples Of How Apple Generates Word-Of-Mouth All Over The World

15. Pebble focuses on creating a great app developer community around its smartwatch product

Learn more: How Pebble Sold A Million Watches With Word-Of-Mouth: 6 Tactics and Examples

Every community needs something to discuss.

Learn more: How Fitbit Grew via Word-of-Mouth to Become the Best-selling Fitness Tracker in 5 Years

Fitness communities have a way of being particularly sticky – people seem to bond more intensively over physical activities, developing shared identities. Just think about the assumptions that come to mind when you learn that a person is into yoga, or CrossFit, or running marathons.

17. Zumba makes it easy for people to bring their friends and make new friends at a dance party

Learn more: How Zumba Spread to 180+ Countries Through Word-of-Mouth

18. CrossFit has been described as cult-ish for its intense community

And that's quite a compliment. CrossFit has a unique way of being simultaneously competitive and collaborative – people work out together and share routines, but they also have leaderboards and annual games.

Learn more: How CrossFit Became A Worldwide Craze Through Word-of-Mouth

19. Lululemon is worth paying more for because you're buying relationships with everyone else who's associated with it

Lululemon cleverly uses store spaces to introduce people to yoga. Talk about inbound marketing! Come in, learn a new skill, make some new friends, and you'll quite naturally find yourself compelled to buy something on your way out.

20. Soulcycle has gotten significant media attention for its intense community

Like CrossFit, Soulcycle has been mocked and derided as cultish in the Netflix TV series 'Unbreakable Kimmy Schmidt" and a mention from Michelle Obama in the 2016 White House Correspondent's Dinner.

Learn more: How Soulcycle Became The Most Sought After Cardio Regime Via Word-of-Mouth

21. The North Face celebrates climbers, explorers and adventurers – both on their blog and on social media

Their blog, NeverStopExploring.com, is full of great stories detailing the expeditions of the athletes that The North Face sponsors.

The hashtag on Instagram is also populated by travel photos of their customers, which functions as an ad-hoc community space.

22. Spotify has an active community that supports and celebrates musical artists

Spotify has expanded to become more than just a mere music-streaming app. Discovering new music is a big part of the service they provide, and achieving that requires an engaged community of fans and tastemakers constantly looking for the hot new acts.

Learn more: How Spotify Built A $5B Business With >75M Music Lovers Through Word-Of-Mouth

23. Pinterest grew by enabling communities of artists and collectors

Bloggers each assembled boards based on a theme (e.g “What home means to us”) accompanied by a blog post. These blog posts were linked to posts from other bloggers, therefore “pinning-it-forward”.

These bloggers also released invites to Pinterest (the site was invite-only at that point in time). Readers were encouraged to make use of their Pinterest invites and remix the bloggers’ boards into boards of their own.

Learn more: How Pinterest Grew From Being Stuck At 3,000 to 73 Million Users Using Word-Of-Mouth

24. Netflix produces original series that have epic fan followings around the world

Netflix doesn't particularly have a singular, centralized community of its own– rather, it benefits when communities emerge around the various original shows that it produces.

25. Shopify doesn't just sell ecommerce software – it also provides entrepreneurs a space to learn, discuss and motivate one another.

The stronger Shopify's ecosystem gets, the easier it becomes for ecommerce retailers to make the decision to join it.

26. Slack enables people to build and manage their own communities on IRC-style channels

A community of community-builders.

Learn more: How Slack Grew From 500K to 1.7M Daily Active Users Within 8 Months With These Word-of-Mouth Hacks

27. Red Bull is a pillar of the extreme sports community, organizing events and sponsoring athletes

They even support spinal cord research, so that injured athletes too can someday be given back their 'wings'.

28. Star Wars grew from being a movie trilogy to becoming an entire universe for people to join

Star Wars grew from being a movie trilogy to becoming an entire universe that people can participate in, in a myriad of ways.

29. League of Legends grew massive while building a gaming community

League of Legends has a huge following with lots of competitive gamers, which itself draws more gamers into the mix.

Learn more: How League of Legends Became The Most Popular Game In The World

30. Coachella music festival board builds anticipation by giving people an idea of the sort of people they'd be meeting at the festival

A music forum allows Coachella to build hype for its festival all year round.

Learn more: How Coachella Grew To Become An $82.4m Hipster Pilgrimage Through Word-Of-Mouth

31. Airbnb – a webapp that manages to build trust within an international community of strangers

In a technical sense, you could consider Airbnb to simply be a marketplace connecting short-term landlords and tenants. But that would leave out the bulk of

Learn more: Growth, Referrals And Getting The Job Done: What Airbnb’s Growth Team Has Learnt

32. Moleskine has a potent community of writers and creatives

Scores of artists have uploaded onto the internet photographs of artwork in their Moleskines, which ostensibly endorses the (paper) quality and reliability of the notebooks.

In return, Moleskine’s social media team is happy to reward these artists for their loyalty to the brand with exposure on their Instagram page, which has some 238,000 followers.