Gotta Get Down On Friday: 13 Triggers Used in Marketing 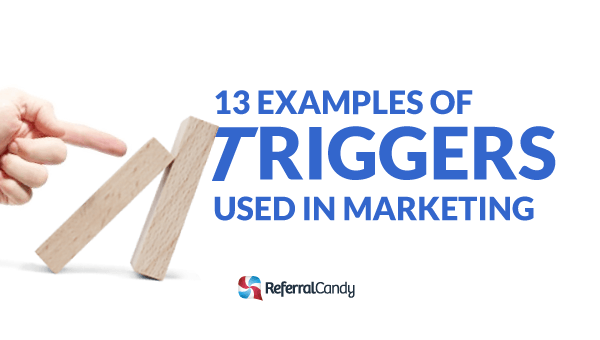 The second principle of Jonah Berger's STEPPS list is Triggers.

When you look at a peanut, you might think of peanut butter. You might also then think of jam.

The peanut acts as a trigger for the consequent thoughts of peanut butter and jam.

Triggers are reminders around you that spark off related thoughts and ideas.

So the goal is to associate your brand with a trigger that people will encounter often.

Here are a few ways you can do that:

Associating your brand with a specific day ensures that your customers will think about your brand periodically,

The more frequent the day arrives in a year, the more your customers will think of your brand!

Many of these examples are linked to localized culture as well, so take advantage of that.

In some countries, Wednesdays are referred to as Hump Day.

It is the middle of the week, where one has to get "over the hump" before looking forward to the weekend.

This ad has Caleb the camel walking around the office, celebrating the arrival of hump day.

By associating the humorous camel with Hump Day, people will naturally remember this video whenever Hump Day arrives.

True enough, the original video received more than 6 million views, and they spiked every Wednesday!

The best part about the choice of Hump Day is that it occurs every 7 days.

Unsurprisingly, Pi Day falls on the 14th of March.

Because pi rhymes with pie, pie makers take this chance to boost their sales, with great results.

Star Wars Day falls on the 4th of May; a play on the iconic phrase "may the force be with you".

It was started by fans of the series, but many brands take the chance to reveal their playful side and celebrate the iconic series:

Unlike the previous examples that associated themselves with existing events, Pepero Day was created by Lotte, the company behind the stick biscuits Pepero.

Pepero resembles the number "1", so Pepero day falls on the 11th of November.

The original purpose of exchanging and eating the snack is to grow taller and slimmer.

It also functions as a Korean Valentine's Day.

This day is so successful, Lotte earns 50% of all annual Pepero sales between September and November alone!

Focusing on the desires of girls to be slim and tall, plus the idea of romance shows that Lotte really understands Pepero's target demographic.

Why focus on a single day when you can associate your brand with seasonal triggers?

The longer the trigger lasts, the more chances there are for your customers to think about, and act on your brand.

5. Christmas in Japan - Kentucky for Christmas!

Christmas isn't a national holiday in Japan, but since the 1970s, the Japanese have been flocking to KFC every Christmas.

That's because KFC had successfully created the association that KFC = Christmas.

The campaign, which began in 1970, initially focused on foreigners who couldn't find turkey during Christmas.

This became a big hit, and now everyone in Japan wants some KFC during Christmas:

KFC had successfully created a cultural trend exclusive to Japan.

6. Coke and the red Santa Claus

Contrary to popular belief, Coke didn't make Santa red in color; he was already in red before they added him in their ads.

But Coke created a strong association with the Christmas icon, by including him in ads since as early as the 1920s.

The legacy was created by Haddon Sundblom's Santa paintings, and even the Santa drawn today bears a strong resemblance to the original.

It also helps that the red robe Santa wears remind you instantly of the red in Coca Cola.

Pumpkins are especially popular in the USA and Canada during the Autumn seasons.

Starbucks rode on the trend by selling the Pumpkin Spice Latte (PSL).

Since their first cup in 2003, PSL has become a popular drink during fall.

"Great" is a very common word in daily language.

Choosing a word commonly used in a daily speech for a brand name increases the chance that your customers will constantly be reminded of you.

Tiger beer comes from Singapore and is predominant in Southeast Asia.

They hijacked a very common question "What time is it?", causing us to constantly remember the ad that was stuck in our heads.

Even now, that reply is the first thing that comes to mind whenever I am asked for the time.

Coined in 1988, Nike's slogan aimed at everyone, not just fitness enthusiasts

The slogan aimed to inspire everyone to have a can-do attitude; to push on with determination and passion.

It became internationally recognized, and helped Nike to increase worldwide sales from $877 million to $9.2 billion in just ten years!

Kit Kat was designed to serve as a snack for breaks, and the slogan, coined in 1958, complimented it very well.

Up until today, Kit Kat remains synonymous with the act of taking a break.

The company was confused: they didn't spend extra money on advertisements or campaigns.

Eventually, they realized it was thanks to NASA's Pathfinder mission to Mars.

The media attention given to the exploration mission had helped trigger thoughts of Mars bars.

It wasn't intentional, but it worked in their favor after all.

Canadian Icons found that their customers tend to buy their goose jackets during snowstorms.

Utilizing that information, they started providing 90-minute deliveries to all major Canadian cities during snowstorms.

This helped them solidify an association that was already there.

No matter what association you create, it's important to ensure that no other brand shares the same trigger.

In this case, perhaps focusing on your brand name instead of your product category might be more effective.

Ultimately, the holy grail of trigger-based marketing would be when your product becomes one with the trigger.

Charles Duhigg, the author of The Power of Habit, states:

"Over time, this loop–cue, routine; cue, routine, rewards–becomes more and more automatic. The cue and reward become intertwined until a powerful sense of anticipation and craving emerges."

This creates a habit, and is the reason why we no longer say, "go search it on the Internet."

Professor Jonah Berger has spent a decade investigating what makes things go viral. Triggers are just one of his 6 part formula of virality (STEPPS):