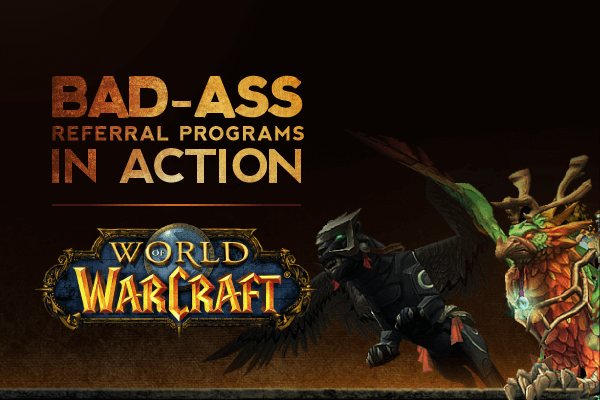 These are just three of our favorite things, and surely you can imagine our faces when we set our eyes on World of Warcraft's (WoW) Recruit-a-Friend referral program.

For those unfamiliar with WoW, it's a Massively Multiplayer Online Role-Playing Game (MMORPG) created by Blizzard Entertainment. It takes place in the beautiful and lore-filled world of Azeroth, and players can create heroes to join raids (quests), duel with other players, or simply explore the world. WoW has over 7 million subscribers as of July 2013, and currently holds the Guinness World Record for the most popular MMORPG by subscribers.

When you have such a brilliant product, and literally hordes of customers, would you still need a referral program? Hell yea.

WoW has a referral program called 'Recruit-a-Friend', and just like the rest of the game, it's filled with epic goodies. Now, you might not be running a massive MMORPG video game, but there are still many things you can learn from the marketing wizards at Blizzard.

After spending some time looking through the Recruit-a-Friend program, and even more, time being distracted by the many videos and in-game screenshots, we finally managed to pick out what we really like about their referral program:

1. Their entire referral process can be completed in-game.

The Recruit-a-Friend system has been around for a very long time, but their latest update in November 2013 has made the referral process entirely in-game.

When Alice wants to recruit Bob into WoW, she can do it without having to leave Azeroth at all. While in the game, all she has to do is to click on her Friends list, hit the Recruit-a-Friend button, enter Bob's email, and pow, done!

While this might not sound like a very big deal, we think it's cool that players do not have to 'travel' between Azeroth and the real world just to send a referral email. It maintains player immersion, and that's a subtle plus point. In fact, when a successful referral has been made, even the rewards can be claimed from within the game.

Whether you have a game or an online store, it's always good if your referral process can be handled in the same window. Having to create a new window or tab to complete the referral process is an extra step, and no one likes extra steps.

Simplify and automate your referral process as much as you can, and your customers will certainly thank you for it.

When Alice recruits Bob into the magical world of Azeroth, there are many different rewards that each of them can enjoy.

These benefits can be broadly divided into two segments:

Once Bob creates an account through Alice's referral email from Blizzard, that account becomes 'linked' with Alice's for 90 days.

During that time, Bob can grant a free level to Alice for every two levels his character gains, and they can enjoy an incredible 300% experience point boost when training together with characters of similar levels! Additionally, They are able to summon the other player's character to his/her current location if they are in a party.

These group play benefits are pretty awesome, and it amplifies the fun players have when they kill digital vermin with friends! This gives the newly referred friend a very good impression of the game, and makes them far more likely to convert to long-term customers in order to continue going on raids with friends.

3. WoW rewards your referrals with goodies you simply can't ignore.

When Bob has been hooked on WoW, and decides to buy more game time to become a long-term customer, Alice can earn additional rewards!

This is arguably the best part of the referral program, and what most players aim to achieve.

In previous versions of the Recruit-a-Friend program, every mount was only available for that particular time period, and so they were extremely rare. In the newest patch, however, players can now get mounts that were previously unavailable! While the drop in rarity of those mounts is inevitable, it also means that players will now be scrambling to get their hands on them! If Alice wants to collect all the four rare mounts and four special pets, she only has to recruit and persuade eight of her friends to purchase two months of game credit each! With WoW being such a good and fun game, coupled with the perks of being referred, it shouldn't take long before they decide to buy more game credit anyway.

Perhaps the best part of the Recruit-a-Friend program is that the mounts and pets are not available through any other means, so the only way to get them is to recruit a friend.

Exclusive and special content always plays into our psychology, and makes us want to have them so that we stand out. We all like to feel special, and be validated for our efforts. When you provide your customers with exclusive rewards, they will feel proud and will be encouraged to stand by your brand.

Make your customers 'addicted' to your brand, so that they'll always be happy and come back for more.

If this post has successfully piqued your curiosity and interest in WoW, click here to satiate your battle hunger!

We hope you've enjoyed our Bad-ass Referral Program this week, and be sure to stay tuned for more!