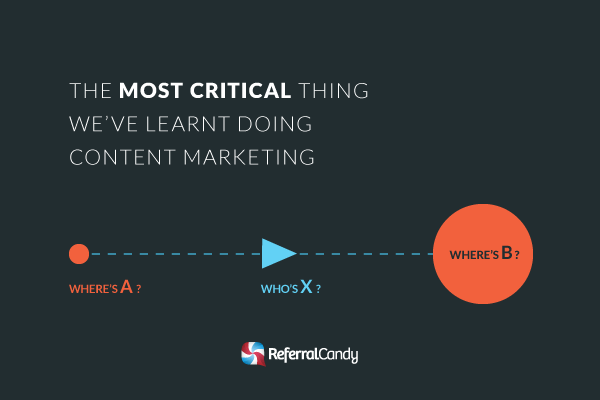 As Rand Fishkin says in his kick-ass SlideShare "Why Content Marketing Fails"...

Does that sound good? Great.

Now let's now talk about the mistakes you're inevitably going to make.

There is an endless number of mistakes you could make, but these are the 4 most critical, in my opinion. If you avoid these 4 mistakes, you should be able to improvise your way through anything else.

Let's get right to them.

Mistake #1: Not specifying the reader. (When you write 'for everybody', you write for nobody.)

Imagine an article titled "This Article Is All About -your name here-". Wouldn't you read it?[/caption]

This might seem slightly counter-intuitive, but the more specific you get, the better. Here are some ideas to help you get more specific about your readers:

Do a Google search for "open letter" and be amazed.

Write for the smartest, busiest version of your ideal customer.

Challenge yourself to write powerfully and succinctly. Write up, not down.

If you write for the smartest reader you can imagine, you'll never have to feel embarrassed about your work.

Remember, the default, equilibrium setting for everybody is inaction.

If you don't grab somebody's attention by appealing to something that matters to them, they won't read it.

Dig into the gory details.

Having a specific person in mind when you write allows you to dig deeper into the flesh and guts of whatever you're writing about, which always makes things more interesting.

Get to know your readers in person.

An example of a persona sheet you might use. Source: UXmovement.com[/caption]

Buy them a beer and pick their brains. Find out what makes them tick, and what they want. You'll save yourself a lot of trial-and-error.

Mistake #2: Not specifying the problem. (If it ain't sound broke, they ain't gonna be fixin' nothin'.)

If we're vague about a problem, people don't respond by figuring out. They respond by moving on to the next thing in their feed.[/caption]

Quite a lot of good stuff has been written about this, so I can just link you to it:

The central idea is conceptually simple: Humans are wired to think in narratives, using change and contrast to help us make sense of things.

So why don't we, as writers, focus on the transformations that our content will give our readers?

We just haven't had enough practice in modeling the minds of others so extensively.

Psychologist Matthew Lieberman points out that it's pretty amazing that we can figure out what other people think at all, but this is a superpower we're only recently beginning to refine and develop.

The 'Curse Of Knowledge' outright obstructs us from seeing things from a laypersons point-of-view.

Dan and Chip Heath described this in their book Made To Stick (here's a great summary): Experts in a given domain have figured out for themselves why something is meaningful, and they can then think more effectively in abstractions and jargon. But this translates badly to passers-by to the domain, who don't know why something is significant.

The disconnect is like a visual illusion: it doesn't quite go away even when we realize and acknowledge that it exists.

The good news is, once you learn to think from a customer-centric, reader-centric, user-centric perspective, you'll find that the responses, feedback, and shares you get are vastly superior.

You'll get hooked on the feedback, and crave more of it.

Mistake #3: Repeating what others have written. ("Why should I read your stuff when someone's already said it better?")

Based on Matt Might's "The Illustrated Guide To a Ph.D.".[/caption]

I find that Clayton Christensen's 'Jobs-To-Be-Done' idea is a particularly useful insight for thinking about content. People 'hire' a piece of content to 'do a job' for them.

Turns out that Gregory Ciotti (again) has already written a good post about creating content from a JTBD perspective. I agree with his assessment of 100%.

Now there's no point in me writing it. I can just refer you to Greg's post.

This can seem depressing initially if I fixate on wanting to have written it first. But it's really quite liberating. It means that I'm now freed to think about what the next steps might be.

You create new value by beginning where the best writing has left off.

Remember that addictive game, City Bloxx? Creating new content should be like that. We add to the collective space.[/caption]

Brian Dean from Backlinko alluded to this when he described the Skyscraper technique.

Skip the stuff other people have already done.

Duplicate content is the bane of the Internet, and more crucially, it's boring. Instead, change your lenses.

If everybody is looking through telescopes, bust out the microscope. Look deeper. Look farther. Look broader. Make comparisons. Chase down the implications.

If you want to write something, and you discover that somebody else has already written it, just link to that and then build off of it.

"But everything's already been written!" False.

I often catch myself thinking this too, and yet... every so often, somebody comes up with something that the rest of us recognize as fresh, high-quality content. How do they do it? What are they doing differently? Typically, they begin by examining some facet of the idea-scape to a greater nuance.

There's no need to reinvent the wheel– and more importantly, you have neither the time nor the resources. Pick something specific and really dig into it.

Here's a fun story about how this worked for us:

4: Misallocating limited resources. (BE VERY PROTECTIVE OF YOUR TIME. Seriously.)

Minimum Viable Content! This idea is shamelessly derived from Jussi Pasanen's (@jopas) idea of how to build a Minimum Viable Product.[/caption]

The most counter-intuitive realization I've had about content marketing is that well-meant 'research' can ruin you.

None of that stuff helped me.

The post was bloated and incoherent. It was a tremendous waste of time and energy, and it was deeply demoralizing.

People who talk about content marketing without talking about resource constraints Really Annoy Me. Source: MarketingLand.com[/caption]

The scary thing about doing 'research' is that it always feels like you're making progress.

You're putting in the hours, doing the reading, collecting the data. You're getting more information about the space that you're in. But that's not actually helping you get to where you want to go. And the clock is ticking.

Once you get that, you get useful feedback. You get shares, you get requests. You get more energy, you get more resources. And then you can afford to do the more ambitious things that you were originally hoping to do.

Read next: 6 Steps To Eliminating Creative Anxiety For Content Marketers