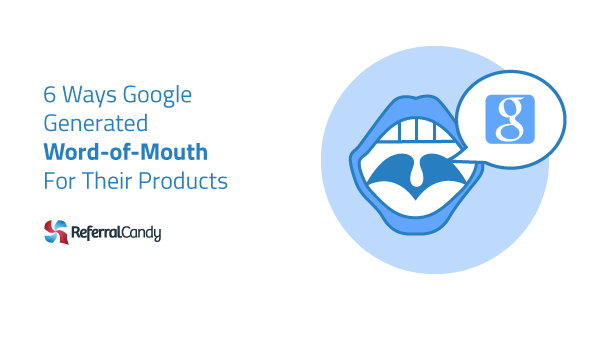 Most of us know Google as an all-powerful company that's always there, and most of us rely on for information.

But have you ever wondered how Google got to where they were today, a 350-billion-dollar company?

We found several instances where Google succeeded in generating a lot of buzz and word-of-mouth for its products.

Now, before you start thinking that a big company like Google has a lot of resources, and can do whatever they want, it isn't always the case.

So anyway, here are 6 ways Google generated word-of-mouth for their products:

1. Google's super-fast load time and the PageRank algorithm powered them to the #1 sport in just 2 years.

Early on, Google understood the main problems plaguing net users at the time:

Hence, they kept their homepage simple - just their logo and a search bar. People started using Google because their search pages loaded much faster.

In their announcement on 26th June 2000, Google had become the largest search engine in the world (in terms of pages indexed), and was given several awards, including the 2000 Webby and People’s Voice Award For Best Technical Achievement and Best Search Engine on the Internet from Yahoo! Internet Life.

But perhaps the most important part was that Google's biggest competitor, Yahoo, had switched over to using Google to power their searches.

While other companies focused on providing a lot of features to its users, such as email, news, weather, etc., Google focused only on being the fastest and most search engine around.

The fact that "Google" is now officially a verb for searching for information online using Google gives enough evidence to that sentiment.

2. Exclusive Gmail, G+, and Inbox invites were in such hot demand that they were sold on eBay for hundreds of dollars.

Gmail - The world's first free email to be 500 times bigger than Hotmail:

When Google released Gmail in 2004, it was in the form of an invite-only system. Apart from being exclusive, Gmail also promised 1Gb of inbox storage space, 500 times more than what Hotmail was offering.

Existing email clients had so little space that users had to constantly delete older emails to be able to receive new ones, which was extremely frustrating.

Everyone wanted more inbox space, and demand for it skyrocketed. Those with invites to spare saw this as an opportunity, and started selling them on sites like eBay, with prices ranging from $60 to over a hundred dollars.

People were selling their souls on the Internet for invites," - Arielle Reinsten, Product Marketing Manager for Gmail

In 2011, Google+ was announced in the field trial beta stage. It was Google's first foray into social media, and some said it was their answer to Facebook.

There was even a period of time in June 2011, where Google closed off all Google+ invites due to overwhelming demand for it.

Vic Gundotra, Senior Vice President of Social for Google, had this to say regarding the closure:

We've shut down invite mechanism for the night. Insane demand. We need to do this carefully, and in a controlled way. Thank you all for your interest!

Even those who had already been invited were not allowed into the service.

Google Inbox - The new email client said to be smarter and more efficient than Gmail:

And in 2014, Google released Google Inbox, a more efficient email client. It was described as a cross between Gmail and Google Now and took on the approach of a to-do list.

Current users of Gmail (myself included) were curious to know what this new email client could do, and how much different was it from Gmail. During Gmail's beta-testing phase, users were given 50 Gmail invites to send to their friends. For Google Inbox, however, each user only gets a maximum of three invites.

I requested an invite from Google and got mine after three weeks of waiting. More impatient users could be found bidding for invites on eBay, with one of them actually paying $205 for it:

On 6th Nov 2014, the Gmail team announced a one-hour window for everyone to get their invites. Understanding the draw of the scarcity principle, I'd wager that the email load received by the Gmail team asking for invites would be pretty intense.

While we know that releasing beta products with an invite-only system helps to iron out the kinks before the actual public launch and prevents the servers from crumbling under extreme user load, it was the exclusivity of these products that drove the demand even higher.

The harder it was to get something, the more people wanted them.

We all love sharing things that give us the feels. According to research by word-of-mouth expert Jonah Berger, high arousal emotions like awe and anger encourage us to share more.

Many of Google's ads have done a great job of forming an emotional connection with us, which makes us want to share that same feeling with friends.

Year in Search (32.5 million views) - A broad recap of what happened that year, and how we should look forward to tomorrow:

Started since 2010, it has been Google's tradition to release a video about the entire year's searches, called the "Year in Search":

Throughout the video, we get to recap on events that have impacted the world, great people who passed on, heroes that rose to the occasion, and many other emotional incidents.

Ultimately, it leaves us with a sense of hopefulness for the next year, which is a very empowering feeling.

It followed the life of a man in France and how he eventually found love there.

The most creative aspect of the video was that the story was told entirely through searches in Google. Featuring nothing else but Google's core product, it showed us their ability to change someone's life, in a way that wasn't presented before.

In October 2014, Google's Executive Chairman Eric Schmidt uploaded a Slideshare presentation called "How Google Works". In it, he covered a wide range of topics about Google, such as corporate culture, strategy, decision-making, innovation, and much more.

The presentation became a hit, as people wanted to read about the struggles and challenges of one of the most influential companies in the world.

Who wouldn't want lessons and tips to become the next Google?

Google Doodles are a creative manipulation of the Google logo, appearing on the homepage to celebrate the anniversary of a famous person, holiday, or significant event. People share them because they are cute, quirky, well-designed, and always changing.

The tradition started out in 1998 when founders Larry Page and Sergey Brin made their own to notify users that they had gone to the Burning Man festival, and wouldn't be around in case the servers crashed.

Google also organizes an annual "Doodle 4 Google" competition, where users are invited to submit their own Google Doodles for cool prizes and a chance to have their work shown to the world. This allows the users to be a part of something special, and also ensure that they'll never run out of cool doodles.

They are also famous for their interactive doodles, which usually features a game or puzzle that users can play with. This first interactive doodle appeared in May 2010, commemorating the 30th anniversary of Pac-Man. Users could navigate Pac-Man through a maze with walls forming the word 'Google'.

It became so popular that Google made it permanently available for users to play.

For a few years, Google had been testing its self-driving car technology on modified Toyota, Audi, and Lexus cars.

But this video released in 2014 showed us their brand-new prototype design for their driver-less cars:

The video featured a few individuals who were invited to take a ride in the self-driving car, and their expressions were priceless.

Perhaps the most important part was when Steve,  a visually-handicapped man, took a ride in the autonomous car.

His comment at the end of the video was exceptionally encouraging:

This video represented the right step into the future, where technology would help empower people to do the things they wanted to do. People share it with friends because it's cool, inspiring, and gives us social currency.