Founder Lex Na had found some success. As developer in his previous life, he understood SEO very well, successfully turning search into a sales channel.

So he started thinking about other channels his business could tap into. Lex realized that word of mouth was a huge part of his business.

Word-of-mouth is important for us. It’s a huge driver of my sales, so I wanted a referral program that would help me get more.

A lot of referrals were happening in forums and online communities, so Lex sought to establish a strong presence with social media influencers.

Lex wanted to get more from the influencers he already had on board; so he considered incentivizing even more referrals by offering cash rewards.

After Lex researching and reading reviews, he decided to give ReferralCandy a try.

Lex used ReferralCandy to set up a referral program where both his influencers and their followers get rewards. ReferralCandy allowed Lex to have an automated referral program that was easy to manage and didn’t require his constant attention to manage.

This meant that Contact Lens Singapore was getting a steady stream of referrals from social media influencers: 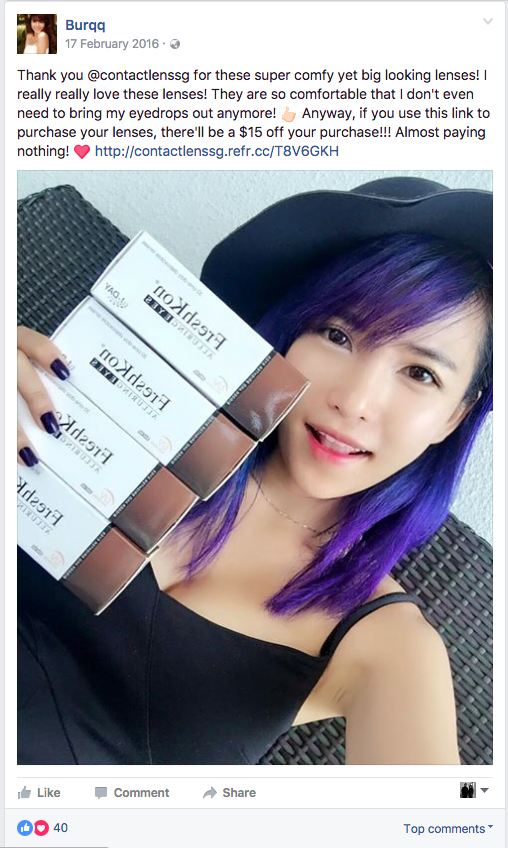 Influencers love our referral program, since they can give value to their audience while earning money.

In addition to helping Lex set up a referral program, ReferralCandy made it easy to keep the program top-of-mind with his influencers and fans.

The app automatically sends reminders to people who signed up for the referral program: This keeps the referral program top-of-mind and makes sure that influencers and customers know that they get rewarded for spreading the word.

ReferralCandy even sends out and manages reward payments, all without Lex needing to get involved:

As a busy entrepreneur, Lex really appreciates how ReferralCandy’s automation features save him time.

I like that ReferralCandy consistently generates sales. It’s set it and forget it.

As Contact Lens Singapore grows their business, ReferralCandy helps them spread the word, generate sales and actively encourage influencers to use their program.

With social media influencers driving a steady stream of referral sales, Contact Lens Singapore continues to build a customer base in a competitive industry.

Start your own Referral Program